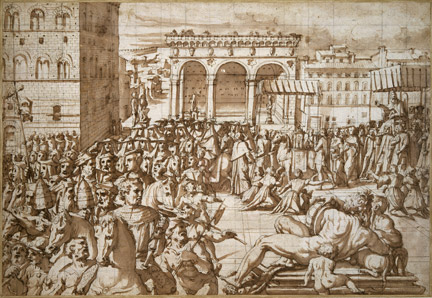 Like 'Portrait of a Man in Armour', this drawing includes a view of the Piazza della Signoria in Florence, here seen as a stage set for public festivity and ceremonial.1 We are shown the triumphal entry of the Medici Pope Leo X into his native Florence in November 1515, remembered 40 years after the event. It is a preparatory study for the fresco in the Sala di Leone X in the Palazzo Vecchio, Florence, one of a cycle of historical frescoes in this room executed by the painter and architect Vasari between 1558 and 1562.2 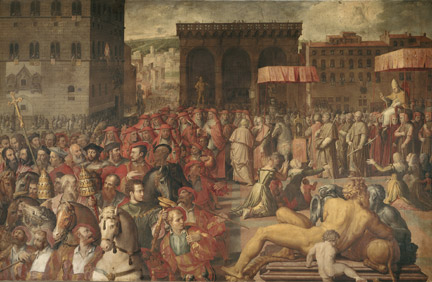 This was part of a vast decorative programme still visible on the upper floors of the palazzo devised to legitimate the role of the Medici family in the destiny of Florence. The Duke of Florence, Cosimo I, had transferred his residence to the traditional seat of republican government in 1540. The subjects and programme for the paintings were furnished by the diplomat and polymath Cosimo Bartoli, who also gave Vasari crucial help for his monumental ‘Lives of the Artists’ (1550). Vasari describes and rationalises his depiction of the event in his ‘Ragionamenti’, appended to the second edition of the ‘Lives’ (published in 1568), an imaginary dialogue in which he gives Prince Francesco de’ Medici a guided tour of the rooms.3

The election of Leo X as pope in 1513 had opened a new chapter in the fortunes of the Medici family, which had returned to the city from exile the previous year. The pope’s entry into Florence in 1515 was marked by an ambitious array of temporary festive decorations carried out by the city’s major architects, sculptors and painters all along the processional route, including a series of triumphal arches designed to celebrate Leo’s exemplification of the seven virtues and to present Florence as a new Rome.4 Here, as the procession winds through the piazza, the spectator’s eye is distracted first by large figures like the mace bearer and the sculptural group in the foreground, before locating the diminutive figure of the pope blessing the populace at background right. Vasari includes essential ceremonial elements – the papal tiaras borne on poles and the monstrance with the Holy Sacrament carried on horseback under a baldachin – while allowing himself a moment of drama with the kneeling ladies asking absolution from their sins.

The Piazza della Signoria had always played a major role in ceremonial entries. Foreign rulers and dignitaries were often greeted by the Florentine government (the Signoria) from their seats behind the ‘ringhiera’. This parapet, a central element of the republican identity of the piazza , is not visible in Vasari’s drawing or in the finished fresco; it is hidden behind the throng of soldiers, cardinals, curial officials and intellectuals. The Signoria themselves, dressed in the traditional ‘cappuccio’ (rolled hat with tail) and ‘lucco’ (sleeveless gown), are shown holding up the pope’s baldachin and carrying his litter, the ‘sedia gestatoria’. Though some roles are switched, this essentially follows the actual ceremonial. It must have seemed as if the pope were taking possession of the city.

Vasari tells the Prince that he chose to locate his processional scene in the Piazza Signoria because of the square’s public importance, and also because its size and surrounding buildings allowed the maximum number of people, both participants and observers, to be included.5 For the same reason, he adopts a high viewpoint: although his perspective is quite rough and ready, he uses the lines of the pavement to construct it, and the vanishing point is about two-thirds of the way up the picture plane. The Loggia dei Lanzi’s arches are shown narrower than in reality (compare Giuseppe Zocchi’s later view, fig. 2), allowing more of the buildings fronting the piazza on the right to be visible. (In the actual fresco, Vasari also includes more of the palace’s north façade to the left). 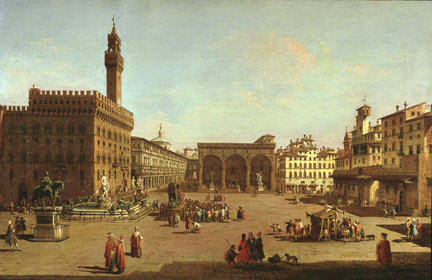 In the background beyond the palace we see part of the medieval façade of San Pier Scheraggio and smaller buildings giving onto the street behind: the view extends over the river to the Oltrarno, telescoped to show the southern city walls. Soon after he painted the fresco, Vasari was to design his most important work of architecture and town planning, the offices of the Magistrates and Guilds (now the Gallery of the Uffizi), with their symmetrical loggias lining the street down to the Lungarno, joined at the end by a triumphal façade. In 1546, ten years before he drew and painted Leo’s entry, the street down to the river had already been widened, and he shows it in this cleared state.6

The drawing contains many more anachronistic details, most of which were eliminated by the time of the fresco, which otherwise follows the study quite closely (though including many more smaller figures and festive details such as carpets at the windows). The sculptural decoration of the piazza was changed. For example, the drawing shows, beyond Michelangelo’s ‘David’, Baccio Bandinelli’s sculpture ‘Hercules and Cacus’ (erected 1534), as well as Benvenuto Cellini’s ‘Perseus’ in the left archway of the Loggia dei Lanzi (placed there in 1554), and the two strange terminal figures by Bandinelli and Vincenzo de’ Rossi put up to carry the chain in front of the doorway of the Palazzo Signoria. All these had been erected since 1530, during the period of the Medici dukedom.7 In the finished fresco Vasari eliminates these statues, correctly retaining the ‘David’, as well as Donatello’s much smaller ‘Judith and Holofernes’ under the right-hand arch of the loggia, while installing under the left-hand arch a colossal image of Hercules bearing his club; Bandinelli is known to have made such a temporary figure, of bronzed stucco, as part of the 1515 festive apparatus.8

Vasari had researched the programme for the ‘Entry’ quite carefully, including details of it in his biography of Andrea del Sarto. For example, he describes a large ‘arcus quadrifrons’ in the piazza, a four-sided triumphal arch, designed by the architect Antonio da Sangallo the Elder; this was erected by the Corner of the Lion, that is, in front of the Marzocco, where Ammannati’s Neptune Fountain is now.9 Vasari chose not to depict this structure in either his drawing or painting of the ‘Entry’. It would indeed have ruined the composition, blocking the view of the Palazzo Signoria and interrupting the majestic curve of the procession. Instead, he fills the empty area at lower right with a complete invention: a sculptural group of the personified River Tiber and its parent, Mount Appennine. The golden river god signifies, Vasari tells us, the golden age brought by Leo to Rome, while Florence is the lion between the two. This flourishing of the arts under Leo is further underlined in the finished fresco by the portraits of poets and intellectuals (including Bembo, Ariosto and Aretino) recognisable in the procession.

To cite this essay we suggest using
Caroline Elam, ‘Giorgio Vasari, The Procession of Pope Leo X, through the Piazza della Signoria, Florence, in 1515’ published online 2014, in 'Building the Picture: Architecture in Italian Renaissance Painting', The National Gallery, London, http://www.nationalgallery.org.uk/research/research-resources/exhibition-catalogues/building-the-picture/place-making/vasari-procession-of-pope-leo-x