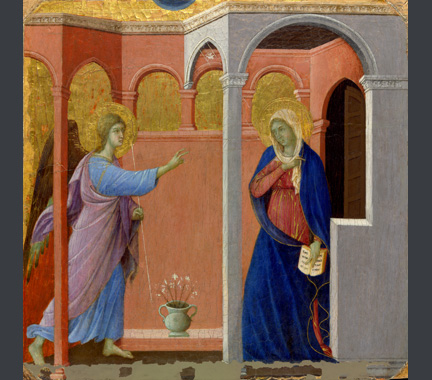 Duccio's small 'Annunication’ originally formed part of a grand double-sided altarpiece, the ‘Maestà’, that stood on the high altar of Siena’s Cathedral. Installed in 1311, the altarpiece remained in situ until the 18th century, when it was removed and partially dismembered. Although many of the original components remained in Siena, numerous smaller panels were scattered throughout collections worldwide, including the three panels that are now in the National Gallery. (The other two National Gallery panels are 'The Healing of the Man born Blind' (fig. 1) and 'The Transfiguration' (fig. 2). 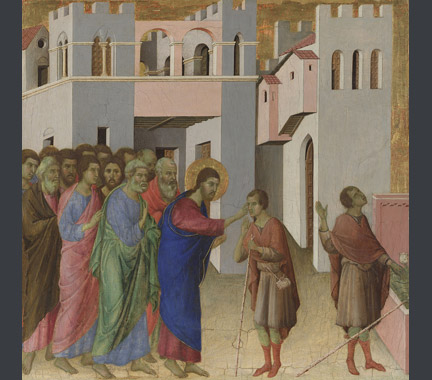 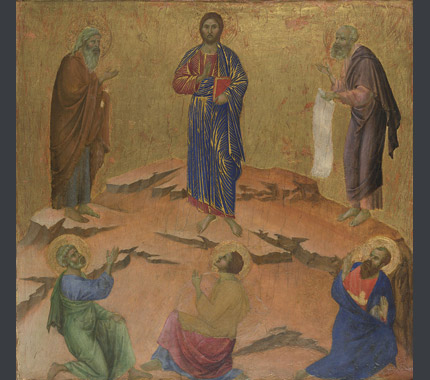 The ‘Annunciation’ was placed on the far left of the front predella of the altarpiece, and was the first panel of a series telling the story of the early life of Jesus. This position is an important starting point in understanding the architecture of the work. Gabriel’s entry through an arch is not only the beginning of the story of the Annunciation, but also the beginning of the ‘Maestà’s epic narrative of Christ’s life, culminating on the rear of the altarpiece with his Crucifixion and Resurrection.

The architecture of this small panel, though apparently simple, is in fact full of complexity, particularly noticeable in its spatial sophistication and considered use of details. On the left, we see Gabriel midway through a gently pointed arch, which, in combination with a rounded arch on the far left, appears to form a porch-type entrance. Small arched openings run along the back wall. These are similar to those found at the cloister of Torri, just south of Siena, making it possible that Duccio intended to evoke a convent-like setting. Given the positive associations of piety and chastity attached to the cloister, it would be an architectural reference entirely suited to the Virgin. The dominant architectural element in Duccio’s ‘Annunciation’ is the large porch occupied by Mary herself. Open on two sides, with a narrower pointed arch facing towards Gabriel and a larger round arch facing the viewer, which also serves to frame Mary, it is distinguished from the rest of the space by its grey colour and the foliate capitals on either side of the Virgin. Behind her is a pointed arched doorway with a half-open door, the bottom third of which is hidden by the projecting low wall at the front. A shallow cornice emphasises that all these elements are part of a unified space. It runs the entire width of the panel, joining the Virgin’s porch to that through which Gabriel enters.

Round and pointed arches

Given that this is clearly one building, the mixture of round and pointed arches is unusual. Rounded arches were particularly a feature of the Romanesque, an architectural style largely supplanted in this period by the Gothic and its pointed arch. To combine these two styles, as Duccio does here, could imply a number of things. The first, and least likely, is that it was simply architectural carelessness on Duccio’s part, a stylistic indifference that seems unlikely when this panel is compared with the rest of the altarpiece. 'The Healing of the Man born Blind', for example, contains very carefully detailed trifore Gothic windows – just one instance of a general attention to architectural detail throughout the ‘Maestà’.1 The second, more plausible, explanation is that Duccio intended to use this juxtaposition of the old and the new as a means of architecturally describing the shift from the Old to the New Testaments caused by Mary’s impregnation, an idea used by his contemporary Giotto in the Arena Chapel, Padua.2 Indeed, given the intermingling of round and pointed arches, Duccio may even be making a more subtle point, seeking to emphasise that this is the very moment of the shift, an instance when everything is in flux. It is significant too that the pointed arches are associated exclusively with entrances within the building. Access, both physical (Gabriel’s) and miraculous (the Holy Spirit’s), lies at the very core of the Annunciation narrative, a truth that Duccio spotlights architecturally through his strategic placement of pointed arches.

A striking feature of Duccio’s architectural setting is the way in which the built environment, as well as acting symbolically, also serves to enrich the narrative. This is especially true of his positioning of Gabriel. The Archangel’s right foot and wings are still within the arch, a placement which, in combination with his raised right heel and forward tilt, clearly shows that he is still in the process of entering.3 This forward motion is further highlighted by Mary’s responsive pose, shrinking back into the safety of her porch as if taken aback by her unexpected celestial caller. It is likely that the half-open door behind her indicates that she has herself only just entered the scene, coming out to see who her surprise visitor is. An idea of the narrative depth which Duccio’s architectural choices grant the scene can be understood by comparing it with Pietro Cavallini's mosaic ‘Annunciation’ in Santa Maria in Trastevere, Rome. In this work, Gabriel approaches an enthroned Mary in a vacuum of mysterious gold space entirely empty of any architectural detail. In contrast, Duccio’s conception invests the scene with a more concrete sense of place, with protagonists who are not just securely fixed within a building but are interacting with it in ways that heighten the immediacy of this sacred event.