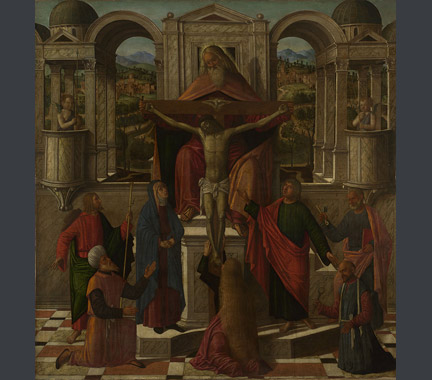 Giovanni Mansueti worked in Venice in the late 15th and early 16th centuries. Much of his surviving work was undertaken for the ‘scuole’, or confraternities, bodies that played a central role in the life of the city. Among his most celebrated works are the series of narrative paintings of the life of Saint Mark for the ‘albergo’ of the Scuola Grande di San Marco. The 'Symbolic Representation of the Crucifixion’ is very much in the spirit of Mansueti’s production for the ‘scuole’.

At the centre of the painting is the figure of Christ on the Cross – an image related to a series of different iconographies, each subtly differentiated by the treatment of the surrounding architecture. These ambiguities of subject and visual structure make it impossible to characterise the painting in simple terms as a representation of a reality, a vision, a concept or even a theatrical presentation. Consequently, Martin Davies, who first catalogued this picture, entitled it ‘Symbolic Representation of the Crucifixion’.

The arms of the Cross are supported by the seated figure of God the Father, while the dove of the Holy Spirit hovers above Christ’s head, creating a familiar Trinity group. Yet the Cross also forms the centrepiece of a Crucifixion scene with Mary and John the Evangelist as well as Mary Magdalene, who clasps Christ’s feet. Mary and John are raised on a platform that distinguishes them from the other figures. To the rear are the apostles Peter and James. Kneeling in the foreground are Nicodemus (holding the pincers with which he removed the nails from Christ’s hands and feet), and Joseph of Arimathea (who provided the tomb in which Christ’s body was laid), figures familiar from depictions of the Deposition.

The coloured pavement and screen

This latter group stand on a grand pavement made of at least five different coloured marbles, arranged in alternating wide and narrow strips, and square and rectangular shapes. The wider strips use bands of white marble to divide large slabs of grey veined and pink Verona marble, while the smaller strips alternate square blocks of dark red and green marble with white rectangles. This counterpoint of coloured stones plays into the magnificent display of marble architecture above. These are specifically Venetian choices, being the materials used on the façade and interior of the Basilica of San Marco.

A screen-like construction rises up behind the figures and separates them from a landscape beyond. The screen is of veined marble with some porphyry inlay and its elements are disposed symmetrically behind a central throne raised up on a dais (accessible from flanking flights of steps). Its lower section is solid and plain but the upper part is a complex composition. Two deep arches spring from the sides of the throne to a pair of flanking aedicules, each of which is surmounted by a dome. Projecting from the aedicules are a pair of pulpits. This detail was perhaps suggested by the twin pulpits sometimes found in the raised chancels of Romanesque churches. There are also late 15th-century Venetian examples of such structures, notably in the church of Santa Maria dei Miracoli, designed by Pietro Lombardo. In each pulpit stands a putto holding an instrument of the Passion.

The screen creates a foreground space that is neither an interior nor an exterior, rather like the courtyard of the Scuola of San Giovanni Evangelista, although it also recalls the church interior of Santa Maria dei Miracoli, designed by Pietro Lombardo and completed in 1494. It is noteworthy that several other representations of the Trinity incorporate virtuoso depictions of architecture, notably Masaccio's 'Trinity' (see fig.  6 in Constructing the Picture: Putting perspective into  perspective) Santa Maria Novella, Florence.

‘The Symbolic Representation of the Crucifixion’ bears an inscription (which is not original), purporting to be Mansueti’s signature. There seems little doubt that the painting, although much worn and abraded, is his work. Particularly characteristic is the confusion between real and imagined space, and also, in this case, between the real or imagined nature of the subject.

From what we know of Mansueti’s work it is relatively straightforward to define the salient features of his artistic personality. His pictures are broadly characterised by a desire to cram as many figures as possible into unreal architectural spaces, and by the use of Mamluk dress in depicting biblical scenes (the Mamluk Sultanate, which encompassed Egypt and Syria, was conquered by the Ottomans in 1517). Mansueti’s architecture is flat, two-dimensional, and decorative, with more than an element of fantasy and theatre. The buildings he creates feel as impermanent as a house of cards. Like Gerolamo da Vicenza's 'The Dorminition and Assumption of the Virgin', Mansueti’s picture creates a splendid Venetian architectural setting for the sacred drama it depicts.