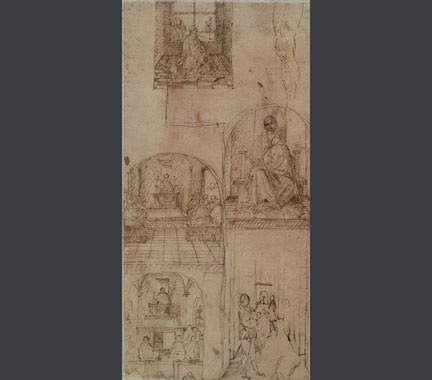 This sheet of five compositional studies is currently attributed to a follower of Antonello da Messina, the Sicilian painter who trained in Naples and who worked, most famously, in Venice. (The verso of the sheet contains further pen-and-ink studies, probably by another hand to those on the recto). For Fiocco, writing in 1951, these drawings were autograph works by Antonello himself, a view tentatively echoed by Wright in 1980,1 while in 1983, Ames-Lewis and Wright argued that the sketches were in fact not by Antonello himself, but were instead by a pupil or follower of the Sicilian master.2

All the drawings share a common concern with the architectural construction of pictorial space and the placement of figures within it. Fiocco and Wright argued that they were essentially a series of compositional experiments, pointing out that the top scene, for example, seems to represent an amalgamation of ideas taken from two works of the 1450s by Petrus Christus, an ‘Annunciation’, now in Berlin, and a ‘Virgin and Child’, now in Kansas.3 Ames-Lewis, by contrast, saw the drawings as copies after key works by Antonello, a number of which have now been lost.4

The drawings in detail

The Madonna enthroned at the right, for instance, bears numerous similarities to the central group from Antonello’s San Cassiano ‘Madonna and Child with Saints’, which now survives only in fragmentary form (Kunsthistorisches Museum, Vienna), particularly in the pose and expression of the Madonna and the throne with a cloth of honour hanging behind. Given the content of the drawings, which include two variants upon a scene of a cleric teaching, partially worked-out settings (such as the figures in a perspectival corridor, at the bottom right) and what appear to be details taken from a painted work (in the case of the two Madonnas), it seems most likely this sheet contains a mixture of studies and copies. 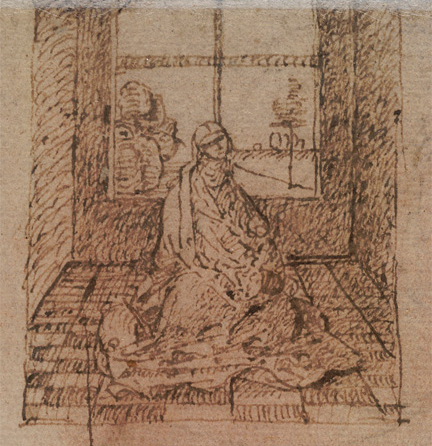 1. Detail of the Madonna top left.

The two uppermost scenes – showing the Madonna and Child in a room and the Madonna and Child enthroned – can be grouped together. In the first of these, Mary sits on the floor or on a low stool, as the Madonna of Humility, within a room with a tiled floor and a huge window occupying almost the whole back wall (fig. 1). Mary fills the middle of the space, her dress flowing out across the floor and increasing her presence. She dominates the room, which surrounds but does not encase her. 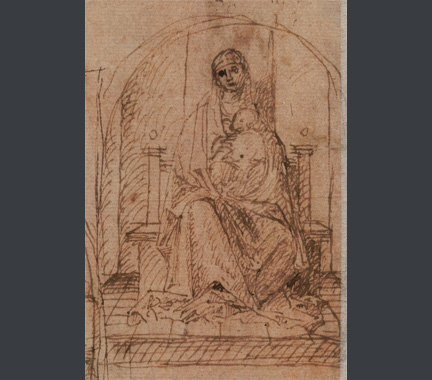 In the second of the two scenes, Mary, this time seated on an imposing throne, occupies space that is also tightly constructed but much shallower, and sealed by a wall and/or hanging cloth of honour in the background (fig. 2). In both of these compositions, the tiled floor, as well as reinforcing the sense of spatial recession, also allows the draughtsman to indicate with some precision Mary’s place within the drawn environment. 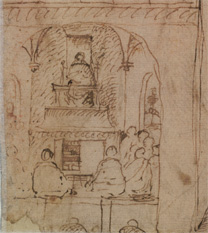 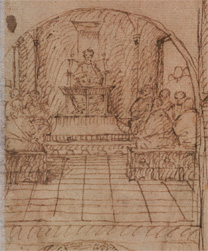 The two scenes at the bottom left of the sheet (figs. 3 and 4) have been described by Ames-Lewis as copies after Antonello’s ‘Disputation of Saint Thomas Aquinas’, now lost (although the figure of the defeated Averroes, usually found in this scene, is missing). However, since they are clearly variants of one subject, it is more likely that they record ideas for a composition, rather than a finished design.5

Both show a formal lecture given by a figure seated on a throne-like seat to an audience arrayed around the sides of a room. Each of these rooms is open on two sides, allowing a glimpse of a landscape outside, and each has prominent console capitals with the springing of vaults visible on the far wall. In these respects, both are broadly similar to a number of enthroned Madonnas painted in Venice and the Veneto in the later 15th century, exemplified by works such as Giovanni Bellini’s San Zaccaria ‘Madonna and Child with Saints’, and Antonello’s San Cassiano ‘Madonna and Child with Saints’ altarpiece, mentioned above. The key differences between the two versions on this sheet lie in the scale of the rooms shown, and the situation of the seated audience within them. The room in the lower scene appears taller, and the throne-like seat placed on top of a cupboard full of books is more elevated. The audience, seated on low benches, is arranged almost like a low wall across the foreground, pressing right against the edge of the space. In the upper variant, by contrast, the viewpoint is pulled back so that the audience is placed in the middle of the room, while a gap in the benches grants us an unimpeded view of the teacher and his elaborate seat. As with the two Madonnas, it appears to be an experiment with the placement of figures within an interior, in this case a more complex exercise due to the number of figures involved. 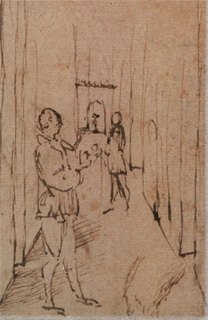 5. Detail of scene at bottom right.

The final scene on the sheet, at the bottom right (fig. 5), is more roughly drawn than the others and seems to depict a street culminating in an archway framing a fountain. Two men stand in this street, one in the foreground and another towards the middle. As a whole, the scene seems to be an experiment in spatial recession and its architectural expression, with the figures included as a study of the effects of perspectival diminution upon the inhabitants of a painting.