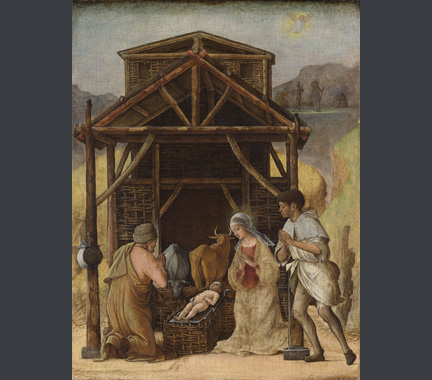 This tiny painting forms the left side of a portable diptych showing the Virgin Mary and Joseph adoring the newly born Christ Child with one shepherd looking on, and an Annunciation to the Shepherds taking place on a distant hillside. The right-hand panel combines four subjects: the dead Christ seated on the ledge of his tomb supported by two angels, Saint Jerome regarding the vision of the dead Christ while preparing to beat his chest with a rock, Saint Francis receiving the stigmata, and just over the brow of a rocky hill Christ’s Deposition from the Cross. 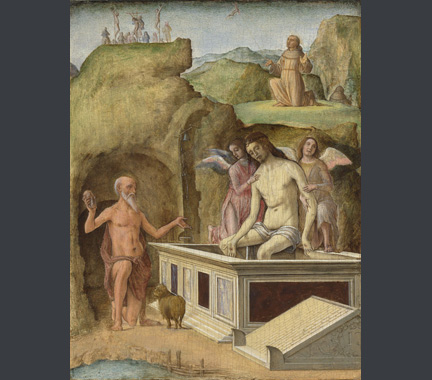 The diptych was almost certainly commissioned in about 1490 by or for Eleonora of Aragon (1450–93), wife of Ercole I d’Este, Duke of Ferrara. A 1493 inventory of works belonging to the Duchess Eleonora lists two separate ‘anchonete’ (little altarpieces) of these subjects, both of which opened and closed like a book.1 The back of this diptych retains traces of its original velvet covering. Eleonora was Ercole de’ Roberti’s patron, and between 1489 and 1493, when this diptych was probably painted, he was decorating a suite of small rooms for her in the Castello Vecchio in Ferrara.2 A personal devotional work, it could have accompanied her while travelling or have been displayed open in her chamber. Its subject matter, the birth and death of Christ, was in tune with what we know of Eleonora’s piety and her participation in the cult of Corpus Christi.3 At the same time, this quasi-miniature would have formed part of the Duchess’s fine collection of paintings, which included works by Mantegna, Giovanni Bellini, and presumably more by Ercole de’ Roberti.

The iconographical type of the Virgin and Joseph kneeling on the ground to adore and pray to the Christ Child, sometimes accompanied by shepherds or the Kings, ultimately derives from the Revelations of Saint Bridget of Sweden and was widely adopted throughout the 15th century. However, rather than emphasising the revelatory or mystical aspects of the subject as some paintings did, the left-hand Nativity scene explores the theme of humility through rusticity. Ercole develops features of the stable already used by Jacopo Bellini and Mantegna among others, such as tree trunks and lopped branches to provide the structural framework, and woven hurdles to make the walls, which create an appropriate setting for the biblical narrative. Yet the design of the stable seems to contradict its modest materials, using Alberti’s ideas for church architecture circulating in Mantua, Florence and Rome, with a projecting porch surmounted by an equilateral triangular pediment and a taller nave-like structure with its own pediment behind. The placing of the stable is also crucial and is unusual in representations of the Nativity or in Adorations, which usually position the building to one side of the picture so it is viewed diagonally or from the side. Here it is set frontally, its projecting porch close up and parallel to the picture plane so that it dominates the picture and directly addresses the viewer.

Like the pastoral plays which were popular at the Este court in Ferrara at the time, the painting plays upon the inherent irony of presenting earthy rustic scenes to an elite urban audience. It conveys the Christian message of the power of humility through the harmonious and elegant design of the stable, which takes the form of a grand temple, executed in a delicate, precise, miniaturist technique.

In other works too, Ercole explored the structural or architectonic character of natural materials, especially rocks and trees, using them to construct niches as in the case of a Saint Jerome (Barlow Collection, Wendover, England), or desert tabernacles as in the ‘The Israelites gathering Manna’ (National Gallery, London). In each case he investigates the interaction between nature and artifice, between raw materials, monumental forms and theological ideas.