Image: Detail from Paolo Uccello, Saint George and the Dragon, about 1470

Saint George and the Dragon

Fake? Or a rare survivor? Scientific examination makes the case for an unusual painting by Uccello

Although concerns about the authenticity of Uccello’s Saint George and the Dragon have occasionally been expressed, they have no basis in science – nor, for that matter, in connoisseurship. Although the painting looks quite different to Uccello's early Battle of San Romano, which normally hangs near it, it is stylistically consistent with late works by the artist. Similarly its medium and support – oil on canvas – are not as rare in 15th-century Florentine painting as previously thought. 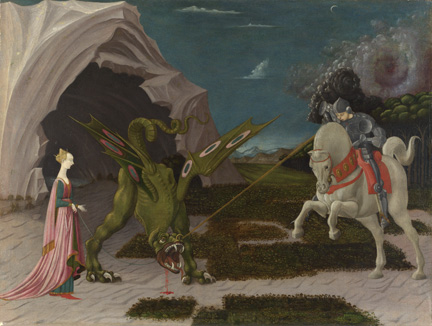 Uccello, Saint George and the Dragon, about 1470

With this alarming headline Thomas Hoving, the former director of the Metropolitan Museum of Art, introduced an article on Uccello’s ‘Saint George and the Dragon’ in ‘The Sunday Telegraph’ in 1996. He had made up his mind on a gut feeling, writing that he was ‘disturbed’ when first seeing the painting. He tried to identify stylistic anomalies, largely derived from a comparison with Uccello’s celebrated ‘The Battle of San Romano’ – a work of about 30 years earlier – that normally hangs near it in the National Gallery.

There had been question marks over the painting before. Before its acquisition in 1959, one of the Trustees of the Gallery, Lord Crawford, had also expressed some concern about the picture’s authorship, despite examining it in relative darkness without a magnifying glass. The painting was first published as a work by Uccello in 1898, but remained relatively hidden in the Lanckoroński Collection in Vienna. It was seized by the Nazis with the onset of the Second World War, only to be consigned to a Swiss bank vault for safekeeping once returned to Count Lanckoroński after the war.

When it was offered to the Gallery in late 1958, few people had ever seen the picture in the flesh. All the same, several scholars responded to the Trustees’ anxiety, observing that it would not have been profitable to fake an Uccello before 1890, nor would a forger have used canvas. The armour and costume were also confirmed as being correct for the period.

With the exception of Hoving’s newspaper article, the authenticity of ‘Saint George and the Dragon’ has never been doubted in print, and certainly no scientific evidence has ever been found to validate Hoving’s instincts. The painting was subject to a detailed examination on its arrival in the Gallery which turned up nothing suspicious; pentimenti, for example, were visible as one might expect, and the pigments were entirely consistent with a 15th-century date.

The canvas support, too, was scrutinised to establish if the painting had ever been transferred from a panel, but no evidence of a transfer operation was found in the area between the ground and the support, nor was the craquelure inconsistent with a painting on canvas. Since 1959 various studies have established that early Italian pictures on canvas were not as rare as had been thought, despite their poor rate of survival. The use of an oil binding medium, as is the case in the ‘Saint George’, is likewise now understood to be less unusual than once supposed.

Re-examination of the paint samples and cross-sections in the mid-1990s suggested that the complex layer structure – evident in the samples taken in 1959 – might indicate that Uccello re-used a canvas. 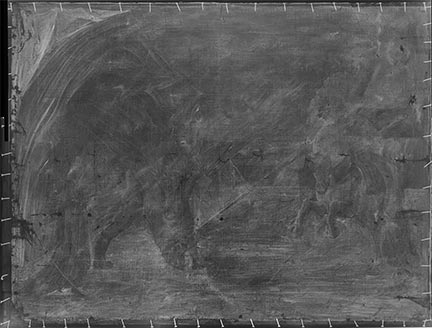 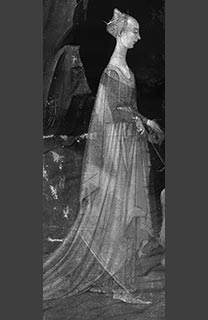 Infrared reflectogram, detail of princess. Broad shapes are visible, indicating the presence of a simple design, possibly a heraldic device

The uppermost paint layer is present over a lead-white layer that seems to cover the entire field of the painting, beneath which are various other paint layers lying over the gesso preparation.

It seems most likely that Uccello obliterated an earlier composition with a layer of lead white before starting on the ‘Saint George’. The first image is difficult to recover, especially when the lower paint layers have little X-ray opacity and are insufficiently absorbing to contrast with the pigments that lie above them. However, it is just possible that broad shapes visible in the infrared reflectogram of the princess indicate some simple design, possibly a heraldic device.