This small painting highlights some curious aspects of artistic practice and the workings of an artist’s studio. The three Le Nain brothers – Antoine, Louis and Mathieu – did not sign works individually, so it is virtually impossible to attribute paintings definitively to a single hand. Most paintings are thus assigned to them as a group. The brothers also appear to have ‘recycled’ canvases by painting over works left in the studio. 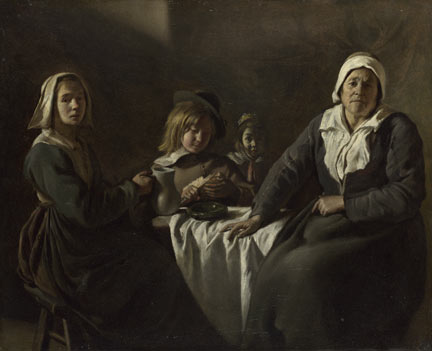 The Le Nain Brothers, Four Figures at a Table, about 1643

Of the three Le Nain brothers – Antoine (about 1600–1648), Louis (about 1603–1648) and Mathieu (about 1607–1677) – Louis is generally considered to be the author of peasant subjects painted in cool, grey colours, characterised by a profound stillness and emotional restraint. But as the brothers shared a studio and frequently collaborated on pictures, the distinctions between them are often blurred.

Four Figures at a Table was given to the National Gallery in 1924 as a work by Louis Le Nain. Dirt, discoloured retouchings and a clumsily painted addition to the bottom of the picture conspired to obscure the quality of the artist’s work, and the painting was judged to be a copy after a lost original. In 1946 the attribution of the Gallery’s work was changed to ‘after Louis Le Nain’.

‘Four Figures at a Table’ was cleaned and restored in 1978. The old varnish was found to have been deliberately tinted, probably to tone down pentimenti that had become more visible as the painting aged. In an effort to understand the pentimenti above the head of the woman at right, suggesting the folds of a curtain, X-ray images were taken of the painting. Surprisingly the marks were found to relate to a bust-length portrait of a bearded man that lay beneath the present painting, turned clockwise 90 degrees. 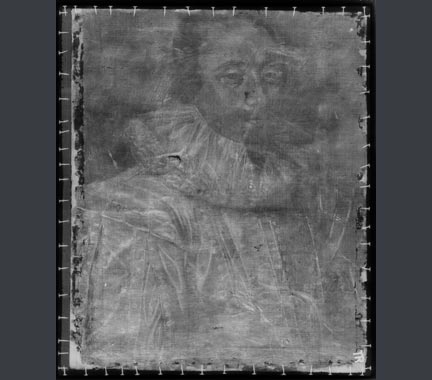 X-radiograph of ‘Four Figures at a Table’, turned through 90 degrees, showing the bust-length portrait of a bearded man

Guided by the X-radiograph, paint samples were taken from different parts of the picture. Studying the layer structure in cross-section provided a better understanding of the two paintings and their relationship. The canvas was prepared with a double ground typical of 17th-century French and Netherlandish paintings: the lower layer orange-red (containing red lead and red ochre) and the upper layer a warm grey (containing lead white and charcoal black). The costume of the man in the portrait seems to have been pale grey, trimmed with lace or braid in pale yellow or cream.

Before the figural scene was begun, the portrait was obliterated with an intermediate layer of lead white and charcoal black. The composition of this paint is so close to that of the top layer of the ground that it seems likely that both portrait and genre scene were the work of the same artist, or at least of the same studio. In addition, the material characteristics of the brownish-black paint of the man’s hair are similar to those of the paint used in comparably coloured areas of the figural composition.

The craquelure patterns of the final painting and the underlying portrait are similar, indicating that the first painting had not aged sufficiently to develop cracks before the canvas was re-used for the figural scene. Specific details of the man’s costume suggest a date of about 1625–30 for the portrait, while ‘Four Figures at a Table’ is generally dated on stylistic grounds to about 1643. It is possible that the underlying portrait may be a copy of an earlier work, or it may have been a model kept in the studio for repetition or adaptation. We will probably never know all the secrets of the Le Nain studio.

Painting
Four Figures at a Table
The Le Nain Brothers