On the basis of some questionable observations, and without the backing of scientific investigation, this painting was catalogued as a fake in the late 1940s. Until that point, it was always considered a fine Renaissance picture. Recently, more rigorous investigation has confirmed that the painting is, in fact, an authentic Sienese work of the 15th century. 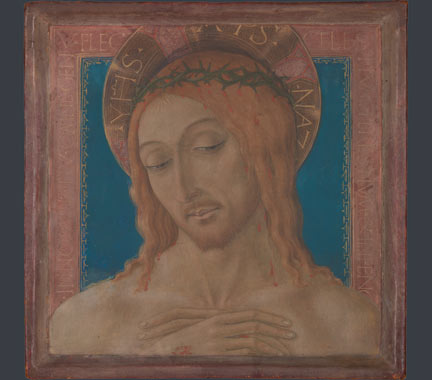 In 1854 the National Gallery Trustees acquired several paintings at Christie’s from the sale of the collection of E. Joly De Bammeville, a pioneering collector of early Italian pictures. They were advised by Sir Charles Lock Eastlake, who would return to the Gallery the following year as its first director.

One of the paintings that they bought, Christ Crowned with Thorns, was believed to be by Niccolò di Liberatore, probably the greatest 15th-century painter from Foligno in Umbria. Ralph Wornum’s catalogue of the pictures in the National Gallery, published in the same year, includes this as an autograph work by him. By 1866, however, the art historians Crowe and Cavalcaselle had realised that the painting was Sienese and attributed it to Matteo di Giovanni in their encyclopaedic ‘History of Painting in Italy’. ‘Christ Crowned with Thorns’ thus became the first Sienese painting to enter the Gallery’s collection.

Dismissed as a fake

The attribution to Matteo remained unchallenged until the late 1940s, when Helmut Ruhemann, the National Gallery’s conservator, examined the painting in preparation for Martin Davies’s catalogue of early Italian paintings. On the basis of some dubious observations, Ruhemann came to the conclusion that the painting was a fake, and so Davies published it in 1951 as by an ‘Imitator of Matteo di Giovanni’ and of 'comparatively recent manufacture'.

Ruhemann apparently failed to notice that the painting had its original engaged frame, which, like the back of the panel, is painted a rich blood-red – possibly an allusion to the Passion of Christ. Davies did, however, note that the square format was unusual. Although he had rejected the painting, he accurately observed a connection with the plaque of Saint Bernardino of Siena which, like the National Gallery painting, bore the name of Christ as a monogram. The unusual format might, then, be a particular devotional type, possibly one specifically associated with Siena. 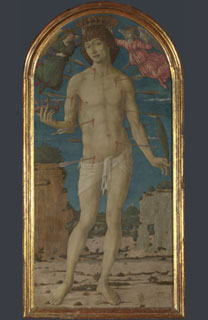 One of Ruhemann’s objections to the painting was that the flesh lacked luminosity and that the surface had an 'unpolished, unhandled [and] dusty' appearance. However, such matt surfaces are often seen on Sienese paintings, including Matteo’s Saint Sebastian and Benvenuto di Giovanni’s The Virgin and Child.

Thus the surface appearance is not itself a reason to question the painting’s authenticity. The pigments are entirely consistent with 15th-century manufacture. The blue is azurite, while the green, evident in the crown of thorns, is natural spherulitic malachite. This pigment has been identified in a number of 15th-century Italian paintings in the National Gallery, as well as in 15th- and 16th-century paintings elsewhere. 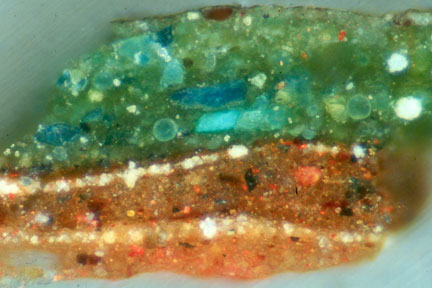 Cross-section from the crown of thorns, showing round particles of spherulitic malachite

The underdrawing of ‘Christ Crowned with Thorns’, revealed by infrared reflectogram, is boldly hatched in a liquid medium – typical of Matteo and offering further confirmation of the work’s authenticity. The underdrawing is especially evident along the right side of the neck. 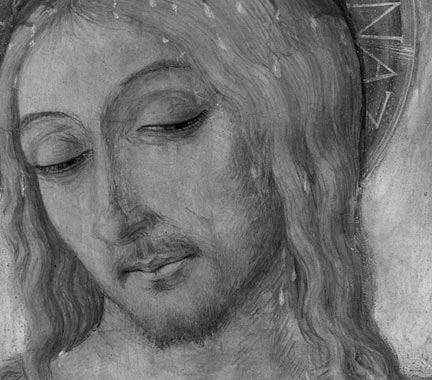