Around 200 of Cézanne’s works depict male and female nude bathers, either singly or in groups, in a landscape. This large painting is one of three pictures of female bathers that Cézanne worked on during the final decade of his life. They represent the culmination of his lifelong investigation of this subject and the climax of his entire career, and were hugely influential on early twentieth-century art.

The subject of women relaxing in a woodland glade beneath an azure sky draws on a classical tradition of pastoral scenes of nude or semi-nude figures in an idealised landscape. More particularly, it recalls pictures of bathing nymphs and goddesses, especially the mythological scenes of Venetian Renaissance art. However, Cézanne’s painting has no clear narrative or literary source. The composition, which echoes the pyramidal base of a mountain, as well as the use of colour, serves to integrate the women with the landscape. Cézanne’s last paintings might perhaps be seen as his final celebration of nature and our union with it.

Around 200 of Cézanne’s works depict male and female nude bathers, either singly or in groups, in a landscape. The earliest dates from the 1870s. This large painting is one of three pictures of female bathers that Cézanne worked on during the final decade of his life. The largest of all his paintings, they represent the culmination of his lifelong investigation of this subject and the climax of his entire career. They were hugely influential on early twentieth-century modern art, particularly Cubism, and had a lasting impact on Picasso and Matisse.

The precise dating of the pictures is difficult. It’s possible that Cézanne worked simultaneously on all three canvases, beginning in the mid-1890s and continuing until his death in 1906, as each shows evidence of reworking. The first of the three, possibly begun in 1895 and of a similar size to the National Gallery’s picture, is now in the Barnes Foundation, Philadelphia. The National Gallery’s painting is generally acknowledged to be the second to have been started. It may date from 1898–9 and was finished in 1905. As he worked on the picture, Cézanne decided to reduce the area of sky and folded the top of the canvas over the stretcher on which it was mounted, which only became apparent when the picture was re-stretched long after his death. The third picture is now in the Philadelphia Museum of Art and relates most closely to the work in the National Gallery. Perhaps painted relatively quickly in the last months of Cézanne’s life, it was left unfinished with areas of canvas still showing through.

All three pictures draw upon a classical tradition of pastoral scenes of nude or semi-nude figures in an idealised landscape, which extended from the Renaissance to artists such as Manet and Renoir. More particularly, they recall paintings of bathing nymphs and pagan goddesses, especially sixteenth-century Venetian mythological scenes such as Titian’s Diana and Actaeon and Diana and Callisto. However, Cézanne’s paintings have no mythological narrative or literary source, nor are any men present. The locations are unspecified, although the landscapes recall Provence, where Cézanne lived.

Of the three paintings, the National Gallery’s is arguably the strongest and simplest in composition. It is also the most fully painted and richly coloured. We are looking at a frieze-like group of 11 nude women relaxing in a woodland glade beneath an azure sky. The picture does not include the water in which the women bathe. Placed before them is a still life and a black dog. Several of the women have their backs towards us, and their faces are either mask-like or turned away. Filling the foreground, most of them lean in towards the middle of the picture. The strong diagonals of their bodies form the base of a pyramid that has echoes of Mont Sainte-Victoire overlooking Aix-en-Provence (where Cézanne was born), which the artist painted numerous times. Although each woman is distinct, they also form a single, almost sculptural mass. Throughout the picture, space is flattened and compressed. Cézanne has not used the conventions of atmospheric recession to create, for example, an effect of a distant sky that becomes paler towards the horizon – indeed, the blue here becomes darker nearest the clouds. The brilliant blue of the sky is as intense as other areas of the picture, and Cézanne has undone perspective by making the sky and clouds as substantial as the earth, trees and women.

Touches of blue are repeated throughout the picture. These not only represent dappled light, but contrast with warmer areas of orange, yellow and ochre. Blue also integrates the women with their surroundings, particularly through Cézanne’s use of a broken blue outline, reinforced by black, around each of them. These bodies are not physically separate from the landscape, but are part of it. This merging is especially apparent in the standing woman on the far left of the group. Her pale skin contains emphatic slashes of blue (for example, on her thigh), but her head is dark, its earthy tones close to the grey-brown tree trunk behind it. The diagonal line of that tree is repeated by her left leg, back and neck, just as the line of her right thigh is mirrored by her right forearm and the almost square top of her right shoulder. These lines, particularly the diagonal of her leg and right angle of her arm, are reiterated in the outline of the larger woman seated on the ground to her right.

Cézanne’s often crude distortions of the body may in part be the result of his awkwardness in figure drawing. He also admitted to the painter Emile Bernard that he was too shy to hire models when working on these pictures, relying instead on memories from visits to museums and the academic studies of his youth. But these distortions also give the women an architectural quality that harmonises with their surroundings, as seen most obviously in the standing woman on the left. As solid as the ground they lie upon, the women become one with the landscape they inhabit. Cézanne’s last paintings might perhaps be seen as his final celebration of nature and as an idyllic, even utopian, vision of our union with it. 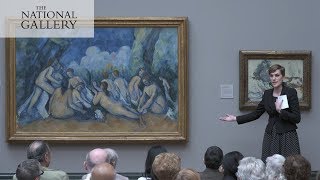 Paul Cézanne’s ‘Bathers’ has hung in the Gallery since the mid 1960s and conveys how Cézanne would slowly and methodically 'construct' a picture rather than simply drawing one. Rosalind McKever, our Harry M Weinrebe Curatorial Fellow walks you throug...

(Showing 6 of 11 works)
An Old Woman with a Rosary
Paul Cézanne
A old women, her gaze unfocused, clutches a rosary – a string of beads used in prayer – tightly in her hands. According to the writer Joachim Gasquet, the sitter was a former nun who had escaped from a convent, wandering aimlessly until Cézanne took her on as a servant.Gasquet found this painting...
Room 44
Avenue at Chantilly
Paul Cézanne
Cézanne spent several months over the summer of 1888 working in and around Chantilly, some 24 miles north of Paris. This is one of three similar oil paintings of the park surrounding the chateau that he produced during his stay. The symmetry and spatial depth of this view may have appealed to him...
Not on display
Hillside in Provence
Paul Cézanne
The wall of angular, jutting rock formations in this painting may represent a quarry, with the cuttings revealing geological strata. While the hillside is somewhere in Cézanne’s native Provence, the specific location has not been conclusively identified.Stylistically, the painting relates to scen...
Room 41
Landscape with Poplars
Paul Cézanne
This painting is of a summer landscape in Cézanne’s native Provence in the south of France. Like the Impressionists, Cézanne was interested in depicting the landscape primarily using touches of colour. Although this painting shows Cézanne’s debt to Impressionism, his method is more controlled. Fo...
Room 44
Self Portrait
Paul Cézanne
Paul Cézanne was about 40 years old when he painted this self portrait in Paris around 1880–1. He was now middle-aged with a family to support, and the intensity of his earlier self portraits has here given way to a more distant and reflective presence. Although relatively small, the portrait has...
Room 44
Still Life with Water Jug
Paul Cézanne
On display elsewhere
The Avenue at the Jas de Bouffan
Paul Cézanne
On display elsewhere
The Grounds of the Château Noir
Paul Cézanne
The Château Noir was a rambling house situated in extensive grounds near Aix-en-Provence in the south of France. Surrounded by wild vegetation, the run-down, isolated chateau offered Cézanne many subjects, and it became one of his favourite locations. He rented a small room in the house from 1897...
Room 41
The Painter's Father, Louis-Auguste Cézanne
Paul Cézanne
An older man sits, legs crossed and head bowed, absorbed in his reading. This is Cézanne’s father, Louis-Auguste. He was probably in his early sixties when his son painted this portrait directly onto an alcove wall in the salon of Jas de Bouffan, the country residence outside Aix-en-Provence that...
On display elsewhere 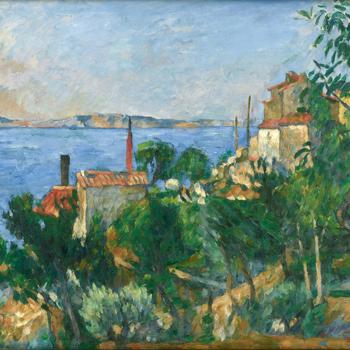 The Sea at L'Estaque
Paul Cézanne
Room 44
The Stove in the Studio
Paul Cézanne
During the 1860s Cézanne divided his time between his family home in Aix-en-Provence and Paris, where this picture was probably painted. It evokes the privation of his Bohemian existence in the capital. Cézanne has rearranged the objects in his studio, and we see them from a high viewpoint, as th...
Not on display
You've viewed 6 of 11 paintings