Actaeon's poignant and gruesome story is taken from Ovid's 'Metamorphoses'. The noble young hunter is separated from his friends after a day's stag-hunting. Inadvertently, he stumbles upon Diana, chaste goddess of the hunt, refreshing herself in the waters of a shady grotto.

Titian shows Actaeon bursting on to the scene and causing consternation among Diana's virgin nymphs. Several of them rush to cover their voluptuous nudity. However, not all of the nymphs appear entirely dismayed at the intrusion of such handsome virility. 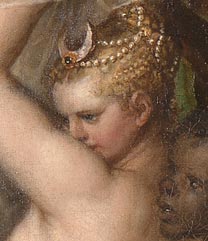 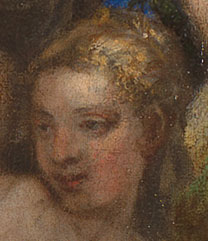 Diana's response is unambiguous. As her handmaiden helps to cover her with a shift, she casts Actaeon a terrifying sidelong glance, sealing his gory fate. Actaeon raises his hands as if to fend off the seductive vision. He seems already half aware of the deadly price he must pay for trespassing, albeit unintentionally, into the goddess's domain.

The scene is loaded with portents anticipating Actaeon's death: the grotto is draped with the skins and skull of Diana's former prey, while in the background there is a vignette of the huntress chasing a stag.

The death of Actaeon

Shortly after finishing 'Diana and Actaeon', Titian embarked on a sequel for King Philip showing the story's tragic conclusion. The Death of Actaeon shows the youth transforming into a stag and being torn to pieces by his own hounds. 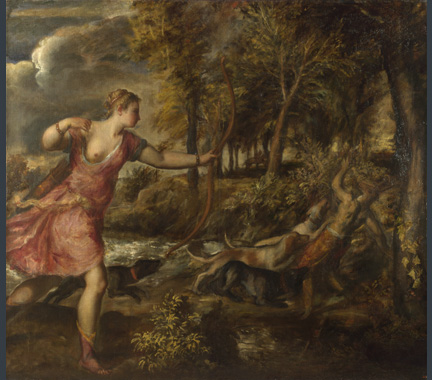 Diana, a towering figure with bow drawn and tunic flying, speeds after her quarry intent on revenge. Although Titian originally conceived this picture for Philip, he seems never to have resolved it to his satisfaction, and it remained in his studio until his death.