French, The Temple of Vesta at Tivoli seen from the Gorge

Situated on the edge of the cliff dominating the valley below Tivoli, is the famous antique Temple of Vesta, commonly known as the Temple of the Tiburtine Sibyl. This small circular building, dating from the last years of the Roman Republic, was converted into a church known as Santa Maria della Rotonda in the Middle Ages. It was admired from the 17th century onwards as a fine example of antique architecture.

The artist who painted this dramatic composition has still not been conclusively identified, although Louis Gauffier (1761 - 1801) has been suggested.

The Temple of Vesta at Tivoli seen from the Gorge

The Temple of Vesta at Tivoli seen from the Gorge 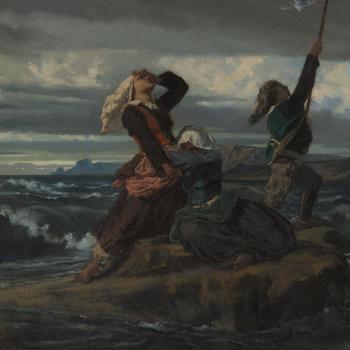 Caught by the Tide
French
Threatened by a raging sea, two women cling to each other in distress while a boy waves an improvised flag, desperately calling for help. Foaming waves encircle their half-submerged rock. They could be the survivors of a shipwreck; caught by the tide, their lives are at the mercy of the elements....
Not on display
Portrait of a Boy
French
This lively portrait was once wrongly attributed to Jacques-Louis David, but it may be by his assistant Georges Rouget or by one of David’s followers, Baron Gros. The boy’s clothing dates the portrait to around the first 15 years of the nineteenth century. However, his hairstyle allows us to date...
Not on display
Portrait of a Lady
French
This modest portrait with a highly finished surface was formerly thought to be by Ingres, but there is no justification for this attribution. Although the sitter and the artist have not yet been identified, both the hair and the clothes enable us to date the portrait to the mid-nineteenth century...
Not on display
Portrait of a Man
French
This small picture could be the ruined remains of a competently painted portrait – it’s in poor condition, but the near eye has a complex catchlight consisting of at least three brushstrokes. The surface is badly rubbed, much repainted and obscured by dirt and discoloured varnishes. Thin brown ov...
Not on display
Portrait of a Man (Victor Considerant?)
French
This small portrait was attributed to the French Romantic painter Eugène Delacroix (1798–1863) when it was presented to the Tate Gallery by the British artist Walter Sickert in 1922. However, this attribution is now rejected on stylistic grounds. The sitter is traditionally identified as the Fren...
Not on display
Portrait of a Young Man
French
This picture raises all the questions usually prompted by an unidentified sitter: who is this person, where is he, how old is he? The dark background gives little information. He’s young, and his clothes suggest he’s well off, but there are no further clues to his identity.When this work entered...
Not on display
Prince Charles Edward Stuart (The Young Pretender)
French
Prince Charles Edward Stuart, popularly known as ‘Bonnie Prince Charlie’, was the son of James Francis Edward Stuart and the grandson of the exiled King James II of England and Ireland and VII of Scotland (known as the ‘Old Pretender’). After James’s exile, the Jacobite cause aimed to return the...
Not on display
Profile Portrait of a Young Man
French
A young man with fair hair and blue eyes is shown from the side, with nothing to indicate his identity or social status. The picture is painted on a paper support, which may originally have been laid down on a panel; it is now mounted on canvas.Profile portraits like this had largely gone out of...
Not on display
The Sky at Sunrise
French
The glowing sky is set between dark hills and threatening storm clouds, the strip of dense grey clouds at the top echoing the blue silhouette of land at the bottom. Distinctive jigsaw-shaped clouds are depicted in layers white hovering over grey, blue sky beyond fading to rose and peach at the ho...
Room 42
Excavation of the Roman Theatre, Orange, France
French (?)
Room 42
The Val de Villé, Vosges
French (?)
Not on display
Fame
Probably French
A life-size female nude with outspread wings alights upon a cloud, which is blown from a mask’s mouth. The mask is of Boreas, the Greek god of the north wind and of winter. In her outstretched right arm, she holds a long trumpet to her lips. In her left hand, she holds a shorter trumpet.This bron...
Not on display
You've viewed 6 of 18 paintings