A young man with fair hair and blue eyes is shown from the side, with nothing to indicate his identity or social status. The picture is painted on a paper support, which may originally have been laid down on a panel; it is now mounted on canvas.

Profile portraits like this had largely gone out of favour in France during the sixteenth century, but the form was not totally unfashionable. It is perhaps possible that this, painted on paper, may be a study for, or even a fragment of, a cartoon (a full-size preparation) for a tapestry. In one of the Valois Tapestries (Florence, Uffizi), a child standing in front of Catherine de' Medici – probably her grandson, Charles of Valois – is shown in profile. His head is not unlike this painting.

A young man with fair hair and blue eyes is shown from the side, with nothing to indicate his identity or social status. The picture is painted on a paper support, which may originally have been laid down on a panel; it is now mounted on canvas. The greyish background is apparently overpaint and covers a strong green.

Profile portraits like were not much in favour in France during the sixteenth century – only a few painted or drawn profiles are known and those of royal subjects are often associated with portrait medals or coin portraits. The form was not totally out of fashion, however. In the Chronologie collée, a late sixteenth-century collection of portraits of famous men, 33 out of 144 are profiles.

The painter Antoine Caron included many profiles in his figure compositions. He made the drawings on which the Valois Tapestries (Uffizi, Florence), probably woven in Brussels in the early 1580s, were based. In one, The Tournament, a child standing in front of Catherine de' Medici – probably her grandson, Charles of Valois – is shown in profile. His head is not unlike this painting; it’s perhaps possible that this, painted on paper, may be a study for, or even a fragment of, a tapestry cartoon. Infrared reflectography reveals what appears to be pouncing for the features. 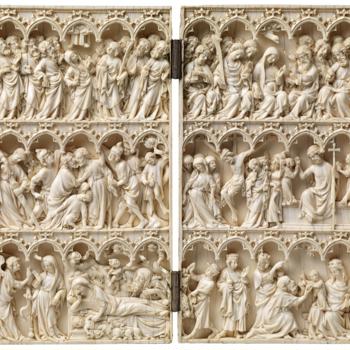 Passion Diptych
French
Room 51
Portrait of a Boy
French
This lively portrait was once wrongly attributed to Jacques-Louis David, but it may be by his assistant Georges Rouget or by one of David’s followers, Baron Gros. The boy’s clothing dates the portrait to around the first 15 years of the nineteenth century. However, his hairstyle allows us to date...
Gallery A: Paintings after 1600
Portrait of a Lady
French
This modest portrait with a highly finished surface was formerly thought to be by Ingres, but there is no justification for this attribution. Although the sitter and the artist have not yet been identified, both the hair and the clothes enable us to date the portrait to the mid-nineteenth century...
Not on display
Portrait of a Man
French
This small picture could be the ruined remains of a competently painted portrait – it’s in poor condition, but the near eye has a complex catchlight consisting of at least three brushstrokes. The surface is badly rubbed, much repainted and obscured by dirt and discoloured varnishes. Thin brown ov...
Not on display
Portrait of a Man (Victor Considerant?)
French
This small portrait was attributed to the French Romantic painter Eugène Delacroix (1798–1863) when it was presented to the Tate Gallery by the British artist Walter Sickert in 1922. However, this attribution is now rejected on stylistic grounds. The sitter is traditionally identified as the Fren...
Not on display
Portrait of a Young Man
French
This picture raises all the questions usually prompted by an unidentified sitter: who is this person, where is he, how old is he? The dark background gives little information. He’s young, and his clothes suggest he’s well off, but there are no further clues to his identity.When this work entered...
Not on display
Prince Charles Edward Stuart (The Young Pretender)
French
Prince Charles Edward Stuart, popularly known as ‘Bonnie Prince Charlie’, was the son of James Francis Edward Stuart and the grandson of the exiled King James II of England and Ireland and VII of Scotland (known as the ‘Old Pretender’). After James’s exile, the Jacobite cause aimed to return the...
Not on display
Standing Virgin and Child statuette
French
Room 51
The Sky at Sunrise
French
The glowing sky is set between dark hills and threatening storm clouds, the strip of dense grey clouds at the top echoing the blue silhouette of land at the bottom. Distinctive jigsaw-shaped clouds are depicted in layers white hovering over grey, blue sky beyond fading to rose and peach at the ho...
Room 46
The Temple of Vesta at Tivoli seen from the Gorge
French
Not on display 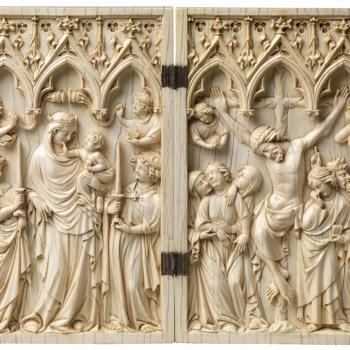