Claude, Seaport with the Embarkation of Saint Ursula

Key facts
Seaport with the Embarkation of Saint Ursula
Claude
/

According to the legend, Saint Ursula, a Christian princess from Britain or Brittany, made a holy pilgrimage to Rome with 11,000 virgins. Dressed in yellow and holding a flag with a red cross, Ursula watches her companions embark on their return voyage. They carry bows and arrows, weapons that represent their death later in the story.

The balance between the soft warmth of the sky and calm sea is typical of Claude’s seascapes. The buildings, trees and ships, all depicted in detail, frame the scene. Claude spent most of his life in Rome: the buildings on the left were inspired by those familiar to him and to this painting’s owner, Fausto Poll (1581–1652), a future cardinal. The palace was inspired by the residence of the powerful Barberini family, Claude’s most influential patrons, whose ship – with their emblem on the flags – is in the centre.

This is one of three imaginary seaport paintings by Claude owned by the National Gallery, and one that tells a story: the sorry tale of Saint Ursula. According to the thirteenth-century Golden Legend, Ursula, a Christian princess from Britain or Brittany, made a holy pilgrimage to Rome with 11,000 virgins.

In this painting, Ursula, dressed in yellow and holding a flag with her emblem, watches her companions embark on their return voyage. They carry bows and arrows, weapons that represent their martyrdom. Later in the story, Ursula and her companions stop at Cologne in Germany, where the companions are all killed by the invading Huns, a nomadic race from Central Asia who conquered much of Europe in the fourth century. When Ursula refuses to marry the leader of the Huns she is shot with an arrow and dies.

The viewer’s gaze is directed towards Ursula and her attendants by the bows of the ships on the right, which point across the painting, and two aristocratic figures in the bottom left corner who witness the spectacle. The balance between the soft, hazy light, the sun low in the sky, and calm sea is typical of Claude’s seascapes, as are the highly detailed buildings, trees and ships, which are intended to frame the scene. Claude spent most of his life in Rome: the circular building with columns in the left foreground is based on the Tempietto di San Pietro in Montorio, a temple built on the spot of Saint Peter’s crucifixion.

This work was painted in 1641 for Fausto Poll (1581–1652), shortly before he became a cardinal. The position was granted to him by Pope Urban VIII (1568–1644), one of Claude’s most influential patrons. The palace building positioned slightly further back on the left resembles the Palazzo Cancellaria, the residence of the Pope’s nephew, Cardinal Francesco Barberini (1597–1679). The emblem of the Barberini family can be seen on the blue flags of the ships placed in the centre, which are being admired by two figures in the middle distance. The Barberini family wielded immense power and influence in seventeenth-century Rome. They were avid collectors of paintings and patrons of Claude.

This story was rarely painted in the seventeenth century but was a popular subject during the sixteenth century. Caravaggio’s Martyrdom of Saint Ursula, now in the Palazzo Zevallos Stigliano, Naples, shows Ursula with an arrow impaled in her chest and surrounded by the Hun soldiers. The authenticity of her legend was questioned during the twentieth century resulting in her feast of 21 October being removed from the Roman Catholic Liturgical Calendar.

This work, along with several others by Claude, was among the first to be bought by the Gallery in 1824, from the prestigious collection of John Julius Angerstein (1735–1823).

Seaport with the Embarkation of Saint Ursula
Claude 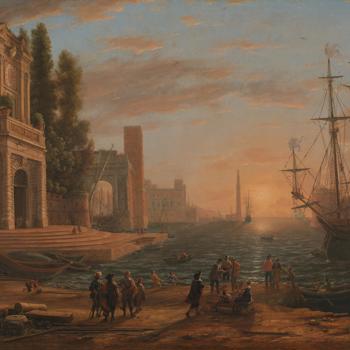 A Seaport
Claude
This warm, tranquil port scene is bathed in sunlight: the clock on the building to the left records the time as five o'clock. A coat of arms with three golden fleurs-de-lis (emblem of the French king) above the clock and on the ship’s flags to the right suggests this painting was intended for a F...
Room 29
A View in Rome
Claude
This painting combines a view of Rome, on the left, with an imaginary ruin, on the right. The distant view is of the sixteenth-century church of Santa Trinità de' Monti, where Claude would be buried. Beside this is the convent of the Sacro Cuore. These buildings are now at the top of the Spanish...
Not on display
Landscape with a Goatherd and Goats
Claude
This small painting beautifully evokes the lushness of the natural world. A young man rests against the base of a tree and turns his head towards us. He holds one hand to his mouth as if playing a flute just out of view, a pose derived from images of the classical hero Orpheus charming the animal...
Room 29
Landscape with Aeneas at Delos
Claude
Aeneas, prince of Troy, dressed here in an orange cloak, left his native city and arrived with his father, son, and companions on the island of Delos, home of the sun god Apollo. Anius, the King of Delos, dressed in white, gestures to an olive and palm in the centre of the painting, two trees sac...
Not on display
Landscape with Cephalus and Procris reunited by Diana
Claude
Diana, goddess of hunting, stands between the huntsman Cephalus and his wife Procris. Procris gives her husband a spear, carried here by an attendant, and a magic dog. The painting is loosely based on a story in Ovid’s Metamorphoses. The title suggests that the pair are being reunited after a fal...
Not on display
Landscape with David at the Cave of Adullam
Claude
King David and his companions emerge from the cave of Adullam. They cannot enter the city of Bethlehem and the valley below as the Philistines, whose pitched tents are just visible in the bottom left corner, occupy both. Nevertheless, three of the King’s soldiers have bravely ventured out to fulf...
Room 29
Landscape with Hagar and the Angel
Claude
Claude illustrates the Old Testament story of Hagar, setting it in a tranquil landscape bathed in hazy sunlight. Hagar is an Egyptian servant girl who gives birth to Abraham’s child and runs away after quarrelling with Abraham’s childless wife, Sarah. Claude captures Hagar’s suffering and despair...
Room 29
Landscape with Narcissus and Echo
Claude
Claude takes the subject of this painting from Ovid’s Metamorphoses. The nymph Echo is in love with the beautiful youth Narcissus, who rejects her. In Claude’s painting, the goddess Nemesis punishes Narcissus by making him fall in love with his own reflection in a pool of water.The castle in the...
Not on display
Seaport with the Embarkation of the Queen of Sheba
Claude
This painting depicts an episode from the Old Testament: the Queen of Sheba embarking on her journey to see King Solomon in Jerusalem. Crowned and dressed in red, the Queen descends the steps. The meeting was often painted, but it was unusual to depict the Queen’s embarkation. The soft warm light...
Room 36
The Enchanted Castle
Claude
Threatened with marriage to a monster Psyche, a mortal, is blown away by the West Wind. She awakens near a magical palace and falls in love with Cupid. He makes Psyche promise not to look at his divine face, but she breaks this promise and Cupid abandons her. The subject of this painting is taken...
Room 29
The Mill
Claude
According to an inscription on a tree stump in the centre, this painting shows the marriage of Isaac and Rebecca described in the Old Testament book of Genesis. The couple dance with tambourines, surrounded by other figures reclining and enjoying the festivities. The flat landscape and expanse of...
Room 36
Landscape with the Death of Procris
Studio of Claude
Taken from an episode in Ovid’s Metamorphosis, this painting shows the moment when Cephalus is horrified to find his wife Procris impaled and slumped against a tree, after he has accidentally killed her with his spear. He thought she was a wild animal – the deer fleeing over the horizon was his i...
Not on display
You've viewed 6 of 12 paintings