A story needs more than one character and young storymakers need ways to trigger ideas for extra characters. You could use other paintings from the Gallery to create some possibilities. 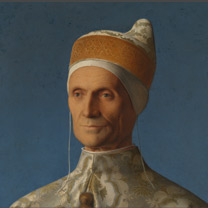 For example, this painting by Giovanni Bellini, although it is not from the same period, can be used to give a sense of character to the horseman.

To develop the setting where the character lived, you could team it with a second painting, A peepshow with view of the interior of a Dutch house by Samuel van Hoogstraten, which shows rooms full of paintings.

Or you could create a freeze frame, where students enact a scene to show the man at home with whoever is important to him, will begin to develop a sense of what sort of man he might be

If you are using the letter as an object to explore, is the man in the painting the same person as the wealthy man in the letter who is in poor health? If the class agree that he is, then who else might live in the house with him? 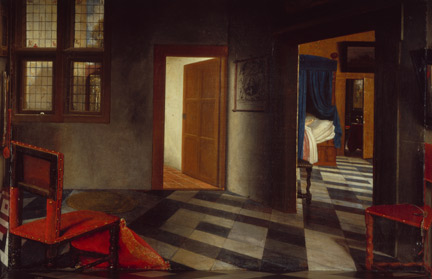 Detail from Samuel van Hoogstraten, 'A Peepshow with Views of the Interior of a Dutch House', about 1655-60

As with the Cuyp painting 'River Landscape with Horseman and Peasants', the images can also become a source for the descriptive language needed to create a sense of place for the story.