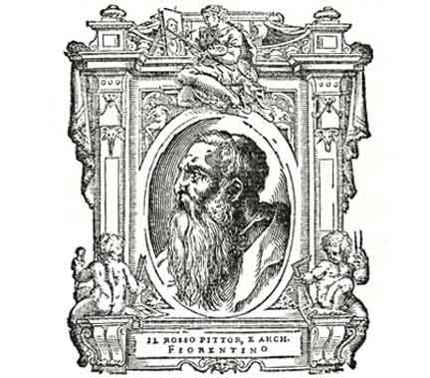 Rosso Fiorentino was one of the leading Florentine painters of the early 16th century. Like his exact contemporary Pontormo, Rosso became a pioneer in the development of the expressive style which is referred to as Early Mannerism. He was the author of a number of striking portraits and an influential print designer, as well as a painter of revolutionary religious works.

Giovanni Battista di Jacopo di Gasparre was known as Rosso Fiorentino, the 'Redhead from Florence'. A pupil of Andrea del Sarto, he was active in Florence from 1513 to 1523. He visited Rome in 1523 and remained there until the sack of the city in 1527.

Like other painters who fled Rome at that time, Rosso went to northern Italy, working for a while in Borgo Sansepolcro. In 1530 he travelled via Venice to France. There he joined Francesco Primaticcio (1504/5 - 1570) as one of the artists employed on the decoration of the royal château at Fontainebleau.

A Knight of Saint John
Rosso Fiorentino
The unknown man in this half-length portrait proudly displays an eight-pointed silver cross suspended from a black cord round his neck, which identifies him as a Knight of the Order of Saint John. His left hand clasps a sword. The pose points to the twin aims of the Order: religious and military...
Room 26
Portrait of a Young Man holding a Letter
Rosso Fiorentino
This is the earliest of very few known portraits by Rosso. It was painted in Florence, while he was in the workshop of Andrea del Sarto. It reveals something of Rosso’s eccentricity, particularly in the strange spiky fingers, the curiously abstract style and the characteristically swift way of wo...
Room 26