Pietro Falca, known as Pietro Longhi, was the main painter of everyday life scenes in 18th-century Venice. His typical small interior scenes record life in Venice, without biting satire or pretentiousness though perhaps with a trace of gentle irony. Longhi had been born in Venice, the son of a goldsmith, and trained first by the history painter, Antonio Balestra (1666-1740).

He was subsequently in Bologna, as a pupil of Guiseppe Maria Crespi, who was well known for his studies of contemporary life, influenced by the work of Dutch painters. Longhi returned to Venice before 1732, the year of his marriage, and was active for a period as a history painter. The first dated example of his typical small interior scenes is from 1741. 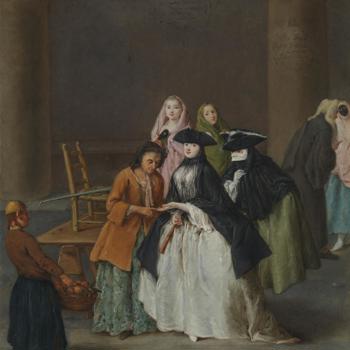 A Fortune Teller at Venice
Pietro Longhi
Fortune tellers were a popular attraction during the Venetian Carnival, celebrated during the 40 days of Lent. The one here is reading the palm of a fashionable lady; a fruit seller with a full basket stops to watch and a masked figure leans forward for a closer look. One woman, however, stares i...
Not on display
A Lady receiving a Cavalier
Pietro Longhi
Pietro Longhi has combined an image of gallantry with a glimpse of domestic life – two maids at the left work at an embroidery frame. The elegantly dressed lady of the house welcomes a dashing gentleman, who places his hand on his heart as he bows from the waist. She leans towards him and lightly...
Not on display
A Nobleman kissing a Lady's Hand
Pietro Longhi
We are looking into a refined room, its walls adorned with paintings in gilded frames and its door obscured by a heavy green curtain. A man in a black robe and white wig, perhaps a Venetian nobleman, bows to a young girl, whose elegant white dress stands out against the vivid green patterned dama...
Not on display 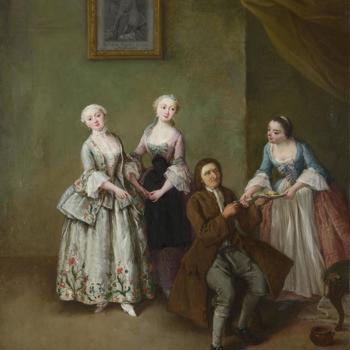 An Interior with Three Women and a Seated Man
Pietro Longhi
Pietro Longhi is best known for his small-scale paintings that give a glimpse inside the houses of middle-class Venetians and show people engaging in the activities of polite society. We don't know what this painting depicts, though it might be a scene from a play. In an elegant room, a servant h...
Not on display
Exhibition of a Rhinoceros at Venice
Pietro Longhi
In 1751, a rhinoceros known as Miss Clara was publicly exhibited at the Venice Carnival, creating a sensation across Europe. She was the subject of poems, paintings, tapestries, medals and sculptures; ladies even styled their hair in the shape of a horn. Pietro Longhi painted this picture around...
Room 39