Diaz was born to Spanish parents, but following their early deaths was raised by a protestant minister near Paris. In 1823 he worked in the same porcelain factory as Jules-Louis Dupré, with whom he became a lifelong friend.

He began copying paintings in the Louvre - this influenced his early work which is based on mythology and literature.

He made his debut at the Paris Salon in 1831 with 'Scene of Love'. From the mid-1830s he frequently stayed in the Forest of Fontainebleau, and was greatly influenced by Théodore Rousseau. He was also influenced by eighteenth-century decorative landscape, and often peopled his own landscapes with musicians, peasants and gypsies. 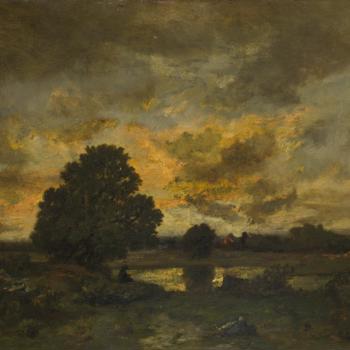 Common with Stormy Sunset
Narcisse-Virgilio Diaz de la Peña
A small dark silhouetted figure sits fishing at the edge of a pool. The location is almost certainly near the village of Barbizon in the forest of Fontainebleau. This is an early example of Diaz’s numerous paintings of watery plains with solitary fishermen, dominant trees standing out against dra...
Not on display
Cows at a Pool
Narcisse-Virgilio Diaz de la Peña
A group of four cows drink at a pool set in a flat grassy plain. A few trees are dotted on the horizon. The cows form a focal point in the composition, their warm brown and ochre tones creating a contrast with the surrounding landscape. The sky is overcast yet the plain itself is painted in fresh...
Not on display
Sunny Days in the Forest
Narcisse-Virgilio Diaz de la Peña
Two women gather sticks by a watery clearing in front of a group of trees. The trees are arranged in an arc, with the most prominent left of centre and the others set back on each side. The composition, which shows the influence of Théodore Rousseau, is typical of those used by Diaz in his views...
Not on display
The Storm
Narcisse-Virgilio Diaz de la Peña
This landscape, imbued with strong natural and dramatic effects, is typical of Diaz’s late work. The view is across the desolate heathlands near the village of Barbizon. The combination of the dominant stormy sky with its mass of grey clouds and the bleak plain conjures up the terrors of a storm...
Not on display
Venus and Two Cupids
Narcisse-Virgilio Diaz de la Peña
In a vaguely wooded setting a woman traditionally identified as Venus sits with two naked cupids pressing into her lap from either side. The whole is very rapidly and thickly painted. Venus’s skirt is painted in thick strokes of pinks and whites swirled together, with dashes of red-brown helping...
On display elsewhere