Degas specialised in scenes of contemporary life, including dancers, entertainers and women at their toilette. His mastery of technique was superb, and he experimented with various media including pastel. Degas remains a popular artist today; his changing styles and preoccupations are well represented in the Collection.

Degas exhibited from the beginning with the Impressionists in Paris. He was able to follow an independent path; his private income meant that he was not forced to attract buyers. He spent most of his life in Paris, abandoning his study of law in 1855 to train with the academic painter Louis Lamothe. In 1855 he studied at the Ecole des Beaux-Arts. He was in Rome 1856/7, and subsequently often travelled to Italy. He deeply admired Ingres, but soon developed an Impressionist approach, under the influence of Manet, whom he knew well.

Degas was a reclusive man, though famed as a brilliant conversationalist. He practised the new technique of photography, which perhaps affected his approach to composition. He was a sculptor as well as a painter, especially in his later years when deteriorating sight troubled him and he was forced to work in the studio close to the model. His later graphic works are mostly in pastel.

(Showing 6 of 17 works)
After the Bath, Woman drying herself
Hilaire-Germain-Edgar Degas
A woman sits beside a bath, drying her hair. She pitches forward, one arm raised to rub the towel on her neck, the other reaching back awkwardly, perhaps to steady herself or perhaps to grasp the towel on the back of the chair. The ungainly but authentic-looking pose makes it easy to believe that...
Not on display
At the Café Châteaudun
Hilaire-Germain-Edgar Degas
This is an early example of Degas’s cafe or cafe-concert scenes. Cafes were an important part of Parisian social life, and also provided artists with a rich source of visual spectacle, characters and ‘types’.Two men seated at a corner table examine a newspaper. The figure facing us points to an a...
Not on display 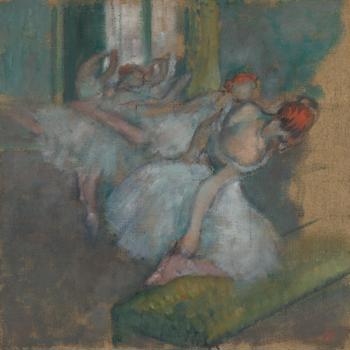