This is an early example of Degas’s cafe or cafe-concert scenes. Cafes were an important part of Parisian social life, and also provided artists with a rich source of visual spectacle, characters and ‘types’.

Two men seated at a corner table examine a newspaper. The figure facing us points to an article, which he reads through a small magnifying glass. His wrist is clasped by his older, monocle-wearing companion. The exact nature of their interaction is unclear, but Degas seems particularly interested in their gestures.

This small picture is essentially a drawing on cream-coloured wove paper (mounted on canvas), which has been coloured in with essence. This is oil paint from which most of the oil has been removed with blotting paper, diluted with turpentine to give the effect of watercolour. Pencil marks under the paint indicate that Degas sketched the scene first and that he made changes to the poses.

Two men seated at a corner table examine a newspaper. The figure facing us points to an article, which he reads through a small magnifying glass. His right wrist is clasped by his older, monocle-wearing companion, seen in profile.

Although we are placed close to them, as if we might overhear what is being said, the exact nature of their interaction is unclear – perhaps the central figure is pointing out a news item to his companion, who grips his arm in response. Degas seems more interested in the men’s poses and gestures than telling us who they are. Several preparatory sketches in one of his notebooks dating from 1867–74 show him exploring different poses for two similar men, both from the front and in profile, although no sketch corresponds to this painting.

This small picture is essentially a drawing on cream-coloured wove paper (mounted on canvas), which has been coloured in with essence. This is oil paint from which most of the oil has been removed with blotting paper, which is then diluted with turpentine to give the effect of watercolour. Pencil marks – some of which you can clearly see under the thinly painted newspaper and as a ruled line marking a vertical axis in the upper centre – indicate that Degas drew the scene first and that he also made changes to the poses. For example, the right arm of the older man originally curved round his chest, away from us. His companion’s right hand was initially drawn clenched, with his fingers curled under the table, but was repainted in a pointing gesture.

Degas gives greater attention to the hands than he does to the faces, which remain sketchy. These recall the caricatures of Daumier, whose work Degas admired and collected. Degas uses a limited range of colour – primarily thinly applied pale greys and yellows and more densely painted browns and blacks. Small touches of pure white highlight particular details and areas – the shirt collars and cuffs, the gleam of the magnifying glass, the newspaper and the table’s edge.

Dating from around 1869–71, this is an early example of Degas’s cafe or cafe-concert scenes, which became an important theme in his exploration of modern life subjects. Degas lived for most of his life in Montmartre, an area of Paris popular with artists, writers, actors and musicians. Cafes were an important part of Parisian social life, and also provided artists, including Degas, with a rich source of visual spectacle (such as cabaret), characters and ‘types’.

Avant-garde artists had their favourite venues. In the late 1860s Degas often accompanied Manet on his almost daily visits to the Café Guerbois. After the Franco-Prussian War of 1870–1, Manet changed his allegiance to the Nouvelles Athènes, where Courbet had been a regular in the 1850s. Degas and other artists often joined him there every Thursday. Although not as celebrated as these two cafes, the Café de Châteaudun shown here was also a popular venue for artists.

(Showing 6 of 16 works)
View all
After the Bath, Woman drying herself
Hilaire-Germain-Edgar Degas
A woman sits beside a bath, drying her hair. She pitches forward, one arm raised to rub the towel on her neck, the other reaching back awkwardly, perhaps to steady herself or perhaps to grasp the towel on the back of the chair. The ungainly but authentic-looking pose makes it easy to believe that...
Room 42
Ballet Dancers
Hilaire-Germain-Edgar Degas
The dancers in Degas’s painting are clouded in a mist of tulle, but two striking heads of red hair seem to anchor the blurred forms moving in space. Arms and legs curve and stretch, delicate white skirts toss and sway. The white tutus depicted here are the practice dress worn by the younger dance...
Not on display 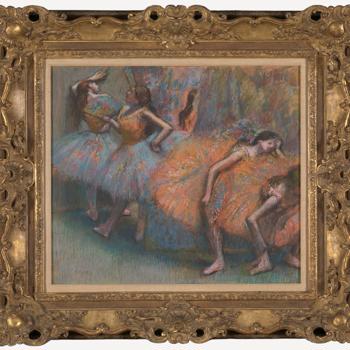 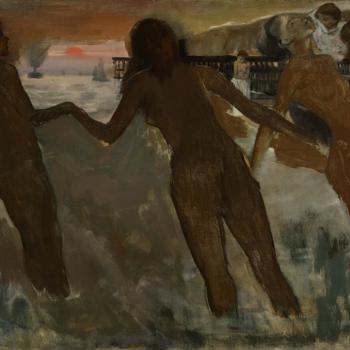 Peasant Girls bathing in the Sea at Dusk
Hilaire-Germain-Edgar Degas
Room 41
Portrait of Elena Carafa
Hilaire-Germain-Edgar Degas
Elena Carafa was Degas’s first cousin. Her mother, Stefanina, the Duchessa Montejasi-Cicerale, was the youngest sister of Degas’s father. Like many members of Degas’s family they lived in Naples, which Degas himself returned to in the winter of 1873–4, when he accompanied his dying father there....
Room 42
Princess Pauline de Metternich
Hilaire-Germain-Edgar Degas
Princess Pauline Sander (1836–1921) was the wife of Prince Richard Metternich, the Austro-Hungarian Ambassador at the court of Napoleon III from 1860 to 1871. Known as the ‘ambassadress of pleasure’, she was a glamorous figure in Parisian high society during the Second Empire. A pioneer of fashio...
Room 42
Promenade beside the Sea
Hilaire-Germain-Edgar Degas
Room 42
Russian Dancers
Hilaire-Germain-Edgar Degas
In the late 1890s a number of dance troupes from Eastern Europe visited Paris and performed at the Moulin Rouge, the Folies-Bergère, the Casino de Paris and at a brasserie near Degas’s Montmartre home. This pastel may have been one of three showing ‘dancers in Russian costume’ that Degas showed...
Room 42
Young Spartans Exercising
Hilaire-Germain-Edgar Degas
The painting illustrates a passage from the Life of Lycurgus by the Roman historian Plutarch, which describes how Spartan girls were ordered to engage in exercise – including running, wrestling and throwing the discus and javelin – and to challenge boys. However, this may be a scene of courtship...
Not on display
You've viewed 6 of 16 paintings