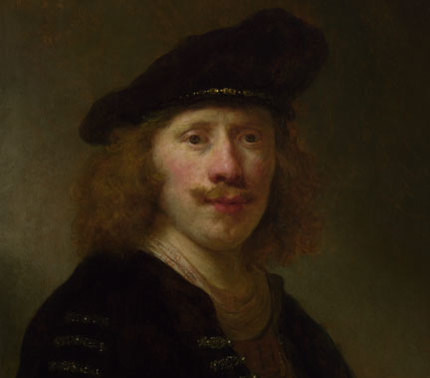 Govert Teunisz. (Anthonisz.) Flinck was born in Cleves. He was a pupil of Rembrandt in Amsterdam, where he remained for the rest of his life. His early work is much affected by Rembrandt (as in this self portrait), but later he abandoned Rembrandt's chiaroscuro for a brighter and lighter colouring.

He achieved great contemporary success, being awarded major commissions for the Amsterdam Town Hall and other public buildings. He was a portrait and history painter.

Self Portrait aged 24
Govert Flinck
Rembrandt was a teacher as well as an artist – and he knew how to school apprentices in his workshop so that they could paint just like he did.In this portrait we can see many of the skills and techniques that Rembrandt used with such great effect. Look at the intense and detailed focus on the fa...
Room 23