Spranger was born in Antwerp, where he trained. From 1565 to 1575 he worked in Italy, where he was influenced by Correggio and Parmigianino in particular their Mannerist figure style and use of sfumato.

He subsequently moved to Prague where he worked for the Habsburg emperor Rudolph II. The prints of the engraver Goltzius spread Spranger's influence through northern Europe. 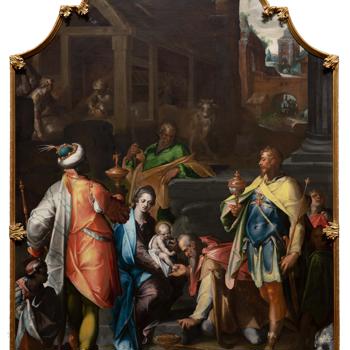 The Adoration of the Kings
Bartholomaeus Spranger
The Three Kings have arrived to worship the newborn Christ. The Virgin Mary presents the baby, who has a bright halo of light around his tiny head, to the kneeling king, who takes the child’s small foot in his hand in order to kiss it. Spranger has positioned the two other kings around the mother...
Room 24