Twenty-five paintings from the private collection of Sir Denis Mahon have been transferred into the National Gallery’s collection by the Art Fund.

The paintings include works by Luca Giordano, Ludovico Carracci, Guercino, Domenichino and Guido Reni, and were already on long-term loan to the Gallery.

The collection comprised 57 Italian Baroque works. Twelve works have gone to the Ashmolean, Oxford; eight to the Scottish National Gallery, Edinburgh; six to the Fitzwilliam Museum, Cambridge; five to Birmingham Museums and Art Gallery, and one to Temple Newsam House, Leeds.

Art historian Sir Denis Mahon, who died in 2011, was one of Britain’s most distinguished art historians, collectors and campaigners. He was associated with the National Gallery for nearly eighty years, first as an attaché to the curatorial department under Kenneth Clark and later as “a hyperactive trustee of the Gallery and exacting friend of many curators … [and] one of our greatest benefactors”. (Director, Nicholas Penny)

He formed his formidable collection over several decades, progressively demonstrating the range, significance and quality of the Italian Baroque despite its comparative neglect by previous scholars. He urged the National Gallery to acquire these paintings and his bequest also included the Guercino masterpiece The Presentation of Jesus in the Temple, 1623, as a direct gift to the Gallery.

Mahon campaigned tirelessly in support of free admission to national museums and against the selling of works of art from their permanent collections. The terms of the transfer of his collection into public ownership stated that the paintings should be on public display in specific locations across the country, in perpetuity.

These terms also mean that the trustees of the Art Fund and of the Sir Denis Mahon Charitable Trust can withdraw works if museums charge an admission fee or sell works from their permanent collections. 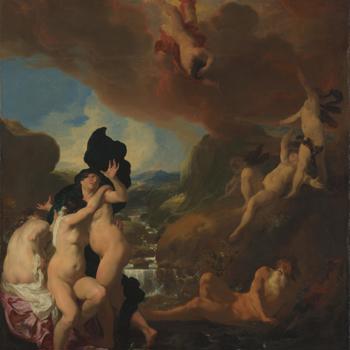 The Fall of Phaeton
Johann Liss
Phaeton, son of the sun god Phoebus, persuaded his father to let him steer his chariot, which was led by fire-breathing horses, across the sky. Phaeton’s reckless driving caused rivers to dry up and lands to become desert. Jupiter, ruler of the gods, intervened to prevent further chaos, striking...
Not on display
The Rape of Europa
Guido Reni
This painting depicts the mythological story of Europa, daughter of the King of Tyre, who, while playing on the seashore one day, was approached by a docile bull. Draping a flower garland on its horns, Europa unsuspectingly climbed onto its back. The bull, who was in fact the god Jupiter in disgu...
Room 32
Landscape with Travellers asking the Way
Salvator Rosa
Passing through a gloomy forest, two riders ask for directions from a group of peasants resting at the side of the road. The man on the white horse points towards the sunlit valley beyond, his gesture mirrored by one of the seated figures. A shaft of warm evening light cuts through the dense cano...
Room 32
The Holy Family
Bartolomeo Schedoni
The Virgin Mary holds her infant son on her knee, supporting him as he uses his finger to help him follow the words in an open book. The Child traces the line of text with one hand, while the other rests tenderly on his mother’s thumb. Saint Joseph gently supports the book in this charmingly inti...
Room 37
Salome receives the Head of John the Baptist
Matthias Stom
The grim story of the beheading of Saint John the Baptist, the prophet who preached the coming of Christ as the Messiah, is recounted in the Gospel of Mark. John had criticised King Herod for marrying Herodias, the wife of his own half-brother. In revenge, Herodias persuaded her daughter Salome t...
Not on display