The National Gallery has acquired its first major American painting – the 1912 work 'Men of the Docks' by George Bellows (1882–1925). This is the first painting by the acclaimed American artist to enter a UK public collection. 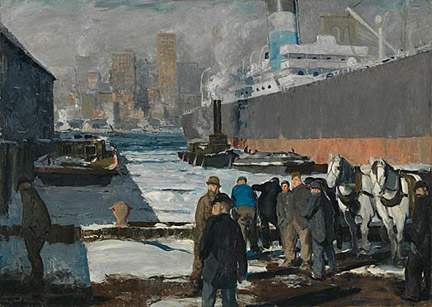 The painting has been purchased from Randolph College in Lynchburg, Virginia, as part of a new, transatlantic academic partnership, the first of its kind between an American college and a UK gallery.

The National Gallery has used some of the fund established by the late Sir Paul Getty and has also received exceptional support from anonymous sources in order to buy the painting for $25.5 million.

The acquisition of 'Men of the Docks', a work made in the Western painting tradition at a vital moment of experiment and innovation in the early years of the 20th century, introduces a previously overlooked dimension to the National Gallery's collection. It also marks a new direction in its acquisition policy – seeking to represent paintings in the Western European tradition, rather than solely those made by artists working in Western Europe.

"Bellows has almost always been seen in the context of American painting, but the way he painted owed much to Manet, and his depiction of the violence and victims of New York derived from Goya and earlier Spanish art. He will seem as modern and original as ever in the National Gallery, but our visitors – many of them from North America – will understand him in a different way. We are thrilled to have been able to purchase this painting."

The National Gallery’s commitment to exploring the American painting tradition began in 2009 with the launch of its ongoing collaboration with the Terra Foundation for American Art. This partnership involves historical masterworks from the United States being brought to London audiences through a series of focused exhibitions. Bellows was the subject of the first of these shows ('An American Experiment: George Bellows and the Ashcan Painters', 3 March – 30 May 2011). Highly successful, it was seen by 98,000 visitors.

'Men of the Docks' is the final and largest in a series of Bellows paintings of workers gathered on a frigid winter day on the New York waterfront. Heroically scaled and vigorously painted, part genre painting and part cityscape; it is an outstanding example of the socially engaged, modern realism that was central to American art in the early 20th century.

"The wilful awkwardness and brutality with which he paints the grey flank of the ocean liner, docked on the Brooklyn waterfront, the thick slabs of pigment that evoke forms and clothing of the workers and the dray horses, and the careful distinguishing of the worker's various mute expressions evoke something of the raw and unbeautiful energy of the urban experience in what was at the time one of the world's fastest-growing cities. The looming Manhattan skyline opposite, however, is executed in a monochromatic mode. It is this control over the various levels of representation on a single canvas at which Bellows was the American master."

The acquisition marks a historic partnership between the National Gallery and Randolph College, one which will advance the College's academic programme. Bradley W. Bateman, President of Randolph College, says:

'Men of the Docks' goes on display in Room 43 of the National Gallery today (7 February 2014) alongside major Impressionist works including snow scenes and urban vistas by Monet and Pissarro, thus linking Bellows with his closest European avant-garde antecedents.

George Bellows was arguably the most original American painter of the early 20th century. His audacious sense of colour and use of paint, and his fascination with distinctively American themes, marked him out as an innovator almost from the moment he arrived in New York in 1904 at age 22.

Born in Columbus, Ohio, in 1882, Bellows was a star athlete at Ohio State University who, to the dismay of his parents, threw over conventional prospects to become a painter. Bellows arrived in New York in 1904, quickly connecting with the charismatic Robert Henri and the group of enthusiastic young painters around him. They were dedicated to depicting the burgeoning American metropolis in all the gritty energy – not to say chaos – of rampant expansion. By 1908 Bellows was acknowledged as the most brilliant of the young generation of painters – his works won prizes and were being acquired by leading public collections.

Seeking respite from Manhattan, Bellows often travelled to Maine where he painted the rugged Atlantic coast in landscapes that introduced a sketch-like, improvisatory aesthetic, and high, piercing colour, to American painting. His innovations here would redound decades later in the emergence of abstraction. Never travelling to Europe, he none the less engaged with new artistic currents emerging there. Bellows died suddenly in 1925 leaving behind a young family, an abbreviated career, and a reputation as an innovator which has never wavered among admirers of American art.

About the American Friends of the National Gallery

Located in Lynchburg, Virginia, Randolph College is an innovative learning community where a classic liberal arts education intersects with practical preparation for a rapidly changing world. Founded in 1891 as Randolph-Macon Woman's College, Randolph offers innovative academic and co-curricular programmes designed to challenge students to develop their intellectual and creative talents and pursue educational opportunities in and out of the college community. The College's motto, 'Vita abundantior', ('the life more abundant') expresses its historical emphasis on the importance of a quality liberal arts education to a rich, full life. For more information, visit www.randolphcollege.edu [External link]

New York-based art dealer Rachel Kaminsky Fine Art LLC acted as a special adviser to the National Gallery in its search for a pre-eminent American painting for its collection.