George Bellows, Men of the Docks

Positioned on the waterfront of the East River, we are looking across the partly frozen river towards the tall buildings of Lower Manhattan. The warehouse in shadow on the left and the massive hull of an ocean liner on the right form two powerful diagonals that meet at the sunlit Manhattan skyline, which rises from the water like a cliff face.

Seen from a relatively low vantage point, the warehouse, liner and skyline form three sides of a box, the fourth wall of which is formed in part by the group of longshoremen, who are most likely waiting to unload the liner. By placing the men against the Manhattan skyline, Bellows ironically contrasts the dynamic centre of modern capitalism with the harsh reality of the people whose labour kept it functioning.

When bought by the National Gallery in 2014, this was the first major American painting to enter the collection.

George Bellows is perhaps best known for his pictures of boxing matches, which he began painting around 1904, shortly after his arrival in New York City from his native Ohio. However, he painted across a diverse range of genres – portraits, landscapes, seascapes and city scenes, such as this one – although he usually addressed more contemporary subjects in the drawings and lithographs he produced for left-wing and social reform publications.

In common with an informal group of older American artists, nicknamed the Ashcan School for their supposedly squalid subject matter, he focused on the realities of contemporary life, especially everyday life in the cities. Bellows had been a student of Robert Henri, the unofficial leader of the Ashcan School, who taught at the New York School of Art. An admirer of Manet, whose work he had seen in Paris, Henri rejected academic painting and what he regarded as overly genteel American Impressionism. He told his students to ‘paint the everyday world in America just as it had been done in France,’ asserting that artists should have ‘a Dickens-like interest in the people and their life’.

This picture is the last and most ambitious in a series of wintry river landscapes that Bellows painted between 1908 and 1912. He had initially focused on views of the Hudson and East River, but in the final group of paintings, which includes this one completed in February 1912 (just two months before the scheduled arrival of the Titanic in New York), it is the riverfront that provides a stage for human activity. Bellows’s choice of a large canvas suggests he regarded Men of the Docks as a major painting, and it was his only submission to the National Academy of Design annual show in 1912. The painting subsequently toured the Midwest and was awarded the Sesnan Medal for best landscape at the Pennsylvania Academy.

Positioned on the waterfront of the East River, near Brooklyn Heights, we are looking across the partly frozen waters towards the tall buildings of Lower Manhattan. On the right, the massive hull of an ocean liner is flanked by a tugboat that is almost a scaled-down version of it. The liner and the warehouse in shadow on the left form two powerful diagonals that meet at the sunlit Manhattan skyline, which rises from the water like a cliff face. The repeated use of blue helps draw us into the picture. Waterfront views of Manhattan’s architecture towering above the river were already a popular subject in photography. Perhaps the most well-known image was Alfred Stieglitz’s The City of Ambitions, first published in the October 1911 edition of his magazine Camera Work. His view of Manhattan swathed in steam and smoke rising from the shimmering water was among the first of many photographs to present New York as an example of the modern sublime. Just above the liner, Bellows has included the top of Brooklyn Bridge, another iconic landmark of modern New York. Completed in 1883, it was the world’s first steel-wire suspension bridge. On close examination, the cables running from the top of one of its turrets are visible; curiously, Bellows has painted the neo-Gothic arches of the turret as rounded, rather than pointed.

Seen from a relatively low vantage point, the warehouse, liner and skyline form three sides of a box, the fourth wall of which is formed in part by the group of longshoremen, who are most likely waiting to unload the liner. Longshoremen (the dockers or stevedores who manually loaded and unloaded ships) were casual labourers, often newly arrived immigrants whose employment was frequently controlled by corrupt union bosses. Their livelihood was precarious and they had a poor reputation. By placing the men against the Manhattan skyline, Bellows ironically contrasts the dynamic centre of modern capitalism – the great ‘city of ambitions’ – with the harsh reality of the people whose labour kept it functioning.

Wearing thick jackets, their hands deep in their pockets and their collars turned up against the cold, the men seem to be listening to an announcement, probably a roll call of who will be working that day. Bellows shows the moment as the inactivity of waiting is about to transform into the physical exertion of heavy work. On the left of the picture, a hunched man, his head bowed, appears to be leaving, perhaps having been told he has not been chosen. His isolation from the group is emphasised by his distance from them and by his being completely in shadow. Although Bellows has painted the men in some detail, their faces and bodies are reduced to essentials. Some are close to being caricatures: the brute physical presence of the largest man on the right, for example, becomes a human version of the powerful dray horses behind him.

Terms such as ‘brutal’, ‘rough’ and ‘wallop’ were often used, approvingly, to describe Bellows’s painting technique and they seem particularly appropriate for his treatment of the men here. These descriptions of a violent or aggressive application of paint perhaps reflect an emphasis on manliness and physicality during the era of President Theodore Roosevelt. As one critic noted, evoking Roosevelt’s well-known love of hunting, Bellows ’slams on his colour most indecorously with splendid effect … He shoots with both barrels of his gun but he bags his game.‘ These descriptions perhaps overlook the astonishing dexterity of Bellows’s exuberant brushwork, but they are also indicative of a distinctly masculine aesthetic in his work, which combines a ’brutal‘ handling of paint with images of men’s bodies, particularly those defined by physical labour (longshoremen) and violence (boxers). A similar use of masculine terminology to describe painting technique would occur again in the 1950s with Abstract Expressionism, and Bellows might be seen as an early forerunner of the movement.

Bellows was hailed ‘the Millet of the stevedores,’ and his depiction of working people had precedents in French art. But it is Courbet rather than Millet who is the precursor here – his Burial at Ornans of 1849–50 (Musée d’Orsay, Paris), especially, is perhaps distantly reflected in Men of the Docks. Courbet sought to create a French popular art, and Bellows’s focus on contemporary everyday subjects was often framed in nationalist terms. The artistic influences may have been French but, following Robert Henri’s example, this is distinctly American imagery.

When bought by the National Gallery in 2014, this was the first major American painting to enter the collection. Its purchase signalled a broadening of the Gallery’s remit from collecting European paintings to collecting paintings in the ‘European tradition’.

Men of the Docks
George Bellows 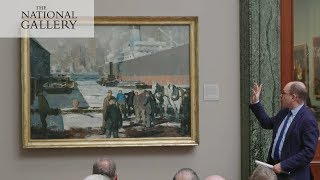 George Bellows's 'Men of the Docks' was the first American painting to enter our collection. Learn more about the subject matter that Bellows is depicting and why it was particularly relevant in April 1912 with Christopher Riopelle, the Neil Westreic...