George Bellows and The Ashcan Painters

With 12 paintings never before seen in the UK, this exhibition introduces visitors to the American artist George Bellows and his artist friends, the Ashcan Painters: William Glackens, George Luks, John Sloan and their teacher Robert Henri.

The Ashcan School was formed at the beginning of the 20th century. American painters, principally in New York City and Philadelphia, began to develop a uniquely American view on the beauty, violence and velocity of the modern world.

'An American Experiment' contains seven paintings by the most prominent member of the group, George Bellows. He is largely known as a painter of urban scenes. The exhibition includes ‘Excavation at Night’, one of a series of images Bellows made of the building work at the site of Pennsylvania Station.

However, Bellows and his contemporaries also enjoyed painting landscapes away from the metropolis. ‘The Palisades’, 1909 shows his engagement with the natural world as its main subject. It also reveals Bellows as a master of snow, alongside his work in ‘Blue Snow, The Battery’. 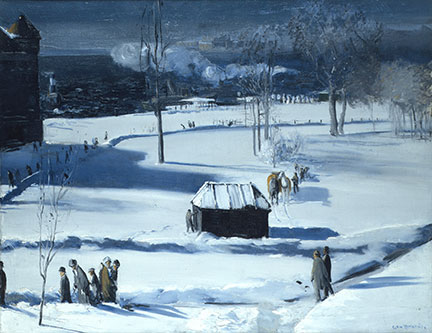 Later works such as the ‘Big Dory’, 1913 see him absorbing avant-garde influences from Europe and anticipating the Art Deco style.

About the Ashcan Painters

The Ashcan painters were part of a widespread interest in the quality of life in modern cities during the early 20th century. Along with British artists like Walter Sickert, they represent a strong analysis of their contemporary urban experience while owing much to Old Masters such as Velázquez and Manet.