The National Gallery announced today, 10th September, that Blue Pacific by Sir Arthur Streeton is on long-term loan to the Gallery, the first time ever a painting by an Australian artist has been featured in the collection. 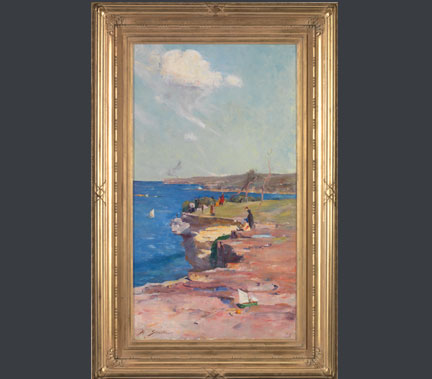 The acclaimed 1890 work by the prolific landscape painter from Victoria, Australia has never before been seen in the UK. It is being lent to the National Gallery by an Australian private collector for the next two years.

The loan continues the new direction in the National Gallery collection policy established by the purchase in 2014 of Men of the Docks by George Bellows – seeking to represent paintings in the Western European tradition, rather than solely those made by artists working in Western Europe.

Streeton’s works have thrilled audiences worldwide for their vigorous brushwork and a keen perception of the poetry of the Australian landscape.

In the 1880s and 1890s, Streeton was considered one of the most advanced landscape painters in Australia and was one of the first to adopt an Impressionist style. The artist’s 'Golden Summer' (1889), long recognised as an Australian masterpiece, was exhibited at the Royal Academy of Arts in London in 1891, and awarded an honourable mention at the Salon de la Société des Artistes Français, Paris, in 1892.

“The National Gallery is keen to look at those artists worldwide who in the late 19th century felt the impact of European avant-garde art. Streeton was among a small group of adventurous Australian painters who, in the 1880s, fell under the spell of French Impressionism and the spontaneous mode of painting it encouraged. Here was a way of capturing the fleeting effects of light and atmosphere in nature when depicting landscapes that had never been depicted before. We are very pleased this work will be coming on loan to the collection.”

“Streeton first visited Sydney in 1880 and there saw the Pacific Ocean in its vastness and sublimity. ‘Blue Pacific’, painted that same year, shows strollers on the clifftops at Coogee gazing eastward as they contemplate the intersection of sea and jagged shore far below. The vertical format is brilliantly calculated to exploit the contrast between the azure sheet of water and the subtly observed depictions of rock face and sky. Still young but at the height of his powers, Streeton demonstrates here how Impressionism was a capacious and flexible tool for confronting the awesome landscape unique to Australia. National landscape would be one of the central subjects of modern art and Streeton was at the forefront in exploring its implications.”

'Blue Pacific' is now on display in Room 43 of the National Gallery alongside major Impressionist works including Water-Lilies by Claude Monet and The Execution of Maximilian by Edouard Manet, thus linking Streeton with his closest European avant-garde antecedents.

Sir Arthur Streeton was born on 8 April 1867 at Mount Duneed, Geelong, Victoria, the son of a schoolteacher. He studied at the National Gallery School, Melbourne from 1882-87 and during that time he worked as an apprentice lithographer.

In 1885, Streeton presented his first exhibition at the Victorian Academy of Art and in 1889, exhibited about forty small 'en plein air' paintings in the ‘9 × 5 Impressions’ exhibition in Melbourne – joining a community of artists influenced by international trends and defiantly opposed to the Victorian tradition.

He moved to Sydney in 1890, where he became acclaimed for his lyric depiction of the area around Sydney Harbour and heroic landscapes of the Blue Mountains and the Hawkesbury River. In 1897, admiring the landscapes of Constable and Turner and the poetry of Keats and Shelley, Streeton left for England.

During the First World War, Streeton was appointed an official war artist, working in France. He finally returned to Australia in 1923, where he painted sunny, pastoral landscape and in 1929 became art critic for Melbourne 'Argus'.