Edouard Manet, The Execution of Maximilian

Ferdinand Maximilian was enthroned as a puppet emperor of Mexico in 1864 with the support of Emperor Napoleon III of France. However, Napoleon III reneged on his military support. Captured in May 1867 by nationalist Mexican and Republican forces, Maximilian and two of his generals were executed by firing squad on 19 June that year.

Manet was outraged by the death of Maximilian, who was widely viewed as a victim of Napoleon III’s political ambition and incompetence, and decided the execution merited artistic treatment on an epic scale. This damaged painting is the second of four versions he painted between 1867 and 1868. He probably abandoned this version because of discrepancies in the size of the figures. A photograph taken in 1883 shows the left-hand section of the canvas had been removed and the picture damaged elsewhere. After Manet’s death, his family cut up the canvas and sold individual fragments separately. Surviving fragments were acquired by Degas and bought by the National Gallery in 1918. They were finally combined on one canvas in the late 1970s.

On 19 June 1867 the Emperor of Mexico, the Austrian Archduke Ferdinand Maximilian, and two of his generals were executed by firing squad. The younger brother of the Emperor Franz Josef of Austria, the 32-year-old Maximilian had been installed as Emperor of Mexico by a French expeditionary force in April 1864. With Maximilian enthroned as a puppet ruler, Emperor Napoleon III of France had planned to subdue Mexico and make it a French colony. However, in February 1867, following the victory of Union forces in the American Civil War and facing German threats to France, Napoleon III reneged on his support for Maximilian. French troops were withdrawn from Mexico and the brief Second Mexican Empire collapsed, leaving Maximilian defenceless.

Maximilian was captured in May 1867 by nationalist and Republican forces led by the deposed former president Benito Juárez. Court-martialled and sentenced to death, Maximilian and his two faithful generals, Miguel Miramón and Tomás Mejía, were executed at Querétaro in central Mexico. Manet was outraged by the fate of Maximilian, who was widely viewed as a victim of Napoleon III’s political ambition and incompetence. Although he greatly disliked history painting, the most highly valued genre at the Salon, Manet decided that Maximilian’s execution, which was widely reported in France, merited artistic treatment on an epic scale.

This damaged painting is the second of four versions of The Execution of Maximilian that Manet painted between 1867 and 1868. Three are large-scale pictures and one is a sketch. He also produced a lithograph, which was suppressed by the government censor in January 1869 and never published in Manet’s lifetime. An edition of 50 prints was produced in 1884 after his death. The earliest painted version, in Boston’s Museum of Fine Arts, is a largely imaginative and hastily painted study rather than a finished picture. Although the execution takes place in an open landscape and not against a wall (as in the final version), Manet’s deliberate reference to Goya’s The Third of May 1808 (Prado, Madrid), which he had seen in Spain two years earlier, is most apparent here.

As more detailed accounts of the execution, including photographs of the victims and the firing squad, became available in France, Manet began work on a second, more authentic version – the National Gallery’s picture. He most likely abandoned this version because of discrepancies in scale: the size of General Miramón on the left, part of whose foot can also be seen in the central fragment, suggests that the Emperor and his generals are too close to the firing squad. Rather than repaint the picture, Manet began a new version. Although the National Gallery picture was never completed, its arrangement of figures was retained in the next two versions. A small, freely painted sketch (Ny Carlsberg Glyptotek, Copenhagen) – the third version – is a preparatory study for the final version (Mannheim, Kunsthalle), which was Manet’s fourth and definitive painting of the execution.

A photograph taken in 1883 of the National Gallery picture shows that the left-hand section of the canvas, containing the Emperor and General Mejia, had been cut away; it also shows damage elsewhere in the picture. After Manet’s death, his family cut up the canvas and sold individual fragments separately. The surviving fragments were acquired by Degas, and bought by the National Gallery in 1918 at the sale of his studio. First shown as separate pictures, the fragments were finally combined on one canvas in the late 1970s.

The Execution of Maximilian
Edouard Manet 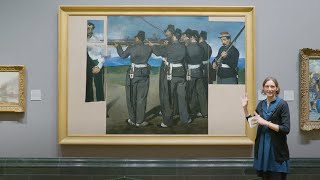 Anne Robbins, Associate Curator of Post 1800 Paintings, explores the subject matter of Manet's 'The Execution of Maximilian' and why it was never exhibited during Manet's lifetime.

Corner of a Café-Concert
Edouard Manet
In August 1874 Manet began work on a large picture of the Brasserie de Reichshoffen, where he was fascinated by the skill of the waitresses. While working on the picture, he radically altered his plans and cut it in two, completing each half separately. This snapshot view of the cafe is the right...
Room 44
Eva Gonzalès
Edouard Manet
Eva Gonzalès (1849–1883), Manet’s only formal pupil, was a successful artist and a regular exhibitor at the Salon. This portrait was probably started in February 1869 and involved numerous sittings. It was finally finished in March 1870 and shown at the Salon the same year.Manet had painted other...
On display elsewhere 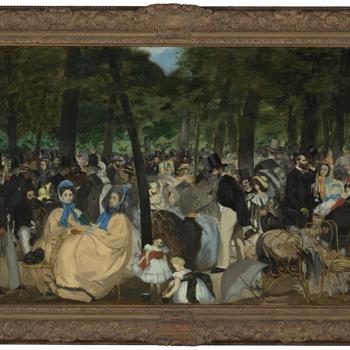 Music in the Tuileries Gardens
Edouard Manet
A fashionable and wealthy crowd that includes many artists and intellectuals has gathered in the Tuileries Gardens to listen to one of the twice-weekly concerts given there. Manet himself stands at the far left of the picture holding a cane, his body cut by the edge of the canvas and partly obscu...
On display elsewhere
Woman with a Cat
Edouard Manet
Room 44