“Landseer’s greatest enjoyment was to wander in the lonely glens, or climb to the steep mountain-top, in search of that nature, animate or inanimate, with which his heart was in accord and there it was that he derived the inspiration which prompted the greater part of his noblest production.” (Obituary from The Report of the Council of the Royal Scottish Academy of Painting, Sculpture and Architecture, 1873)

No British painting of the 19th century is as immediately recognisable as 'The Monarch of the Glen'. It has so often been reproduced that it is part of our shared visual memory; however, this means that it can be hard to look at it with fresh eyes. 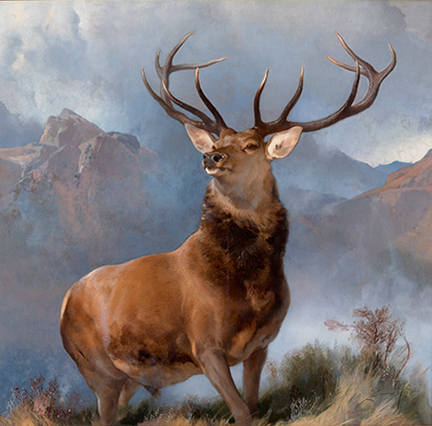 This autumn, arguably the world’s best known animal painting is ‘coming home’ to Trafalgar Square for the first time in more than 160 years. 'The Monarch of the Glen' is the centrepiece of a focused exhibition of 14 works that for the first time explores the close connections between its painter, Sir Edwin Landseer (1802–1873) and the National Gallery.

Today Landseer is not a household name; however, he was one of Victorian Britain’s most renowned artists. He was Queen Victoria’s favourite artist (she bought dozens of paintings from him) and prints of his works could be found on walls of homes across the globe. During the 20th century, when some aspects of Victorian culture were dismissed as old-fashioned,' The Monarch of the Glen' intriguingly survived this shift in taste, assuming a new purpose as an extremely popular marketing image. Today, the story of how it was originally created is long forgotten.

It was the great fire of 1834 that destroyed the Palace of Westminster which resulted in Landseer receiving the commission for his most famous painting. Plans to rebuild included the establishment of a ‘Fine Arts Commission’ – which included Sir Charles Eastlake, who would go on to become the National Gallery’s first Director in 1843 – to commission works of art to decorate the new building. One of these was 'The Monarch of the Glen'.

The painting of a life-size stag was first exhibited at the Royal Academy in 1851, which was then housed in the National Gallery building. It returns to Trafalgar Square on loan from the National Galleries of Scotland, who acquired the work in 2017 following a large public fundraising appeal. This is the first time 'The Monarch of the Glen' has been shown in London since 1983.

Christopher Baker, Director of European and Scottish Art and Portraiture at National Galleries of Scotland, says in his book accompanying the exhibition, “Landseer’s life and career encompassed soaring talent, public adulation, and private tragedy. The drama, sentimentality, and often sophisticated exploration of the complex interaction between people and animals found in his works stuck a chord with millions. What distinguishes The Monarch of the Glen from other works by the artist is its euphoric, triumphal quality; it shows an animal in command of its environment, not – as yet – at the mercy of pursuers.”

The exhibition demonstrates Landseer’s connection to the tradition of Old Master painting, and his strong interest in another great animal painter’s study of anatomy – George Stubbs, whose monumental horse painting Whistlejacket (about 1762) can be seen close by in Room 34. Landseer owned Stubbs’s collection of anatomical drawings of the horse and imitated his study of animal anatomy. Included in the show is George Stubbs’s 'Working drawing for 'The Seventh Anatomical Table of the Muscles ... of the Horse' (1756–8, Royal Academy of Arts, London) alongside Landseer’s 'Ecorche drawing of a dog's leg' (1821, Victoria and Albert Museum, London), and 'A Dead Stag' (date unknown, National Galleries of Scotland).

Landseer designed the lions for Nelson’s Column in Trafalgar Square (commissioned in 1858) and the exhibition includes paintings and drawings connected with these famous sculptures, some of which were based on sketches he made at London Zoo. The project took eight years to complete, and is thought to have contributed to the poor health which blighted the last decade of his life. A painting from about 1865 by John Ballantyne called 'Edwin Landseer' (National Portrait Gallery, London) shows the artist in a studio modelling one of the lions, while being attended by his snoozing dog (thought to be called Lassie). This is accompanied by Landseer’s drawings 'Four studies of a lion's head and Head of a lion' (both about 1862 and from The Courtauld Gallery, London) and a painting 'Study of a Lion' (about 1862, Tate).

Landseer’s The Monarch of the Glen also highlights the artist’s close relationship with Queen Victoria and Prince Albert, whom he tutored in etching and visited in the Scottish Highlands – included in the show is a work by her own hand, 'A pencil drawing of a stag after Landseer's mural on the Dining Room wall at Ardverikie Shooting-lodge' (5 Sept 1847, The Royal Collection). Christopher Baker comments in his book “The Queen knighted Landseer in 1850 and she recalled in the 1870’s how ‘He kindly had shown me how to draw stags’ heads…’, but he memorably described her in a private letter as ‘a very inconvenient little treasure.”

Also included in the show are works by Landseer of Highland scenes demonstrating how he developed his distinctive approach to their representation, including 'Scene in the Highlands, with Portraits of the Duchess of Bedford, the Duke of Gordon and Lord Alexander Russell' (about 1825–8, Private Collection on loan to the National Galleries of Scotland) and 'The Sanctuary' (1842, The Royal Collection).

A representation of the painting made in 1966 by former National Gallery Associate Artist Sir Peter Blake (on loan from a private collection) provides a living artist’s response highlighting The Monarch of the Glen’s enduring appeal.

“Landseer was an extraordinarily talented artist who drew very deeply on his knowledge of Old Master painting. The loan of The Monarch of the Glen presents a wonderful opportunity to demonstrate this and to make the connections between London and Landseer’s work.”

“Landseer's 'The Monarch of the Glen' is one of the 19th century's best-loved images. The exhibition celebrates the picture's recent purchase by the Scottish National Gallery, as well as the artist's connection with Trafalgar Square.”

Sir Edwin Henry Landseer RA (7 March 1802 – 1 October 1873) was an English painter, well known for his paintings of animals – particularly horses, dogs, and stags. However, his best known works are the lion sculptures in Trafalgar Square. Landseer displayed his remarkable artistic skills at a very early age; when he was only 12 years old one of his paintings was exhibited at the Royal Academy.

He excelled at painting animals, often bringing great drama, animation and wit to his portrayals. Landseer's enthusiasm for Scotland prompted annual visits from 1824 onwards, and he combined hunting expeditions with sketching trips. The artist’s own conflicted opinions on hunting probably also influenced the range of scenarios found in his works – he undoubtedly enjoyed the life of the country sportsmen, but wrote in his letters about his intense dislike of cruelty. He was Queen Victoria's favourite artist and was honoured with a knighthood in 1850.

Publication - 'The Monarch of the Glen' by Sir Edwin Landseer (1802–1873) is one of the most celebrated paintings of the 19th century and was acquired by the National Galleries of Scotland in 2017. In this new book, the first to focus in detail on this iconic picture, Christopher Baker explores its complex and fascinating history. Published by National Galleries of Scotland, £9.99, ISBN:  978 1 911054 17 7.