Dr Nicholas Penny has today (23 June 2014) announced his intention to retire from his role as Director of the National Gallery in 2015. 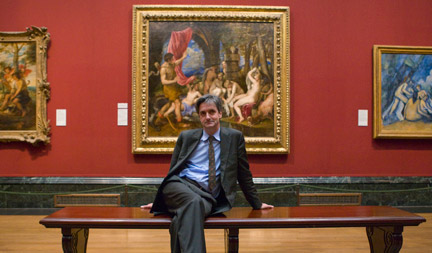 Dr Nicholas Penny in front of Diana and Actaeon

His decision comes as he approaches his 65th birthday this December. The exact date of his retirement will depend on the appointment of his successor.

Under Dr Nicholas Penny’s Directorship, the National Gallery staged the most successful exhibition in its history, 'Leonardo da Vinci, Painter at the Court of Milan', as well as major exhibitions on painters including Barocci, Veronese and, this autumn, Rembrandt. In 2013, for the first time ever, annual visitors to the Gallery exceeded 6 million.

Reflecting on his six years as Director, Nicholas Penny said:

"I have enjoyed my years as Director and am grateful to the Trustees, staff and to the Gallery's supporters for helping to ensure that the Gallery has continued to prosper despite a steadily declining grant – to flourish both as a great and popular resource and as a home for scholarship; a national gallery admired internationally."

"Following my retirement I have many plans, but chiefly look forward to spending more time with my family, friends and books."

Mark Getty, Chairman of the National Gallery Trustees, expressed the Board’s gratitude to the Director for all he has done for the Gallery, saying:

"Nick has been an extraordinarily successful Director of the National Gallery, steering the nation’s acquisition of the two great Titian paintings, 'Diana and Actaeon' and 'Diana and Callisto' jointly with the National Galleries of Scotland, and this year securing the acquisition of the Gallery's first major American painting, 'Men of the Docks' by George Bellows. The Board are hugely grateful to him for his energy, vision and commitment to the Gallery's work. We will miss him greatly."

The Board of Trustees will shortly begin its search for a new Director. Under the Museums and Galleries Act of 1992, the Director of the National Gallery is appointed by the Trustees with the approval of the Prime Minister.

Nicholas Penny has agreed to stay in office for the entirety of that recruitment process, in order to affect a smooth handover to his successor.

NOTES TO EDITORS
Dr Nicholas Penny (born 21 December 1949) has been the Director of the National Gallery since February 2008.

After obtaining a doctorate from the Courtauld Institute, he began his career as a lecturer in art history at the University of Manchester. His first museum position was that of Keeper of the Department of Western Art at the Ashmolean Museum in Oxford.

Dr Penny is the author of many books and articles on both painting and sculpture, and on the history of collecting and taste. His works include scholarly catalogues, introductory texts for the student and critical reviews for the general reader.