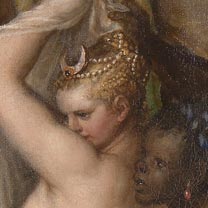 'Diana and Actaeon' will hang in Room 10 of the National Gallery from 12 September 2009, as part of a new display demonstrating Titian’s profound influence on European art. Paintings from diverse parts of the National Gallery’s collection will be shown alongside 'Diana and Actaeon' and Titian’s The Death of Actaeon (acquired in 1972), including works by Cézanne, Rubens, Poussin, Claude and Constable.

'Diana and Actaeon' is one of six large-scale mythologies inspired by the Roman poet Ovid that Titian painted for King Philip II of Spain. Titian began the picture and its companion 'Diana and Callisto' in 1556, the year of Philip’s coronation. Spurred on by the prestige of royal patronage, he unleashed all his creativity to produce works of unprecedented beauty and inventiveness. Titian worked for three years to perfect these masterpieces, which were shipped to Spain in 1559. He claimed their lengthy genesis was due to the relentless pains he took to make sumptuous works of art worthy of the king.

Titian established the standard for mythological paintings by balancing figures and setting, with the landscape playing an active role in the drama. Of all the artists that followed Titian, Rubens was most influenced by his example. On his second visit to the Hapsburg Court in 1628, Rubens copied all of Titian’s paintings in the Spanish royal collection. The Judgement of Paris was painted by Rubens following this visit and demonstrates how Titian influenced his depiction of feminine beauty and rich use of colour. Rubens also examined how Titian used movement, gesture and expression, and this is reflected in his Aurora abducting Cephalus. Movement becomes key in Baroque art, and Aurora runs into the painting as Actaeon and Diana run into 'Diana and Actaeon' and 'The Death of Actaeon' respectively. Poussin’s depiction of Cephalus and Aurora shows a different, but no less profound response to Titian’s example, especially in his creation of carefully studied poses that are still and restrained by comparison with Rubens.

Cézanne’s Bathers (Les Grandes Baigneuse), the painting on which he was working when he died, will be shown alongside 'Diana and Actaeon', one of the paintings that established bathers as a subject in its own right. Cézanne could not have seen 'Diana and Actaeon' but is most likely to have known an engraving of the painting. In 'Bathers' there are similarities with Titian’s composition in the positioning of the trees to echo the figures and in the vigorous brushstrokes.

Titian’s dramatic use of the forms and colours of nature made him a hero to later generations of landscape painters, although he never painted a scene in which a landscape dominated. Constable observed of Titian’s landscape style that ‘the spectator finds, on approaching the picture, that every touch is the representative of a reality’. Titian was the first artist to use brushwork as an expressive device and an example of his ‘touch’ can be seen in Constable’s technique in Cenotaph to the Memory of Sir Joshua Reynolds.

Notes to Editors
The arrival of 'Diana and Actaeon' is prompting a major re-hang of Room 9, Room 10,  Room 12 and Central Hall.