Every week the National Gallery concerts brought classical music to Londoners, including a new audience of working people. Find out more about the performers and the pieces they played.

In 1939 Myra Hess was an accomplished pianist of international repute. She had made many highly successful tours of Europe and the United States and was about to embark on her most extensive to date when hostilities broke out.

Her American agent exerted considerable pressure on her to fulfil her commitments in the US, but instead she decided to stay at home in the UK for the duration of the war. ‘We are facing the annihilation of everything we hold important,’ she wrote, ‘And this wonderful opportunity to give spiritual solace to those who are giving all to combat the evil seems, in some mysterious way, to have been given into my hands.’

The ‘opportunity’ was the National Gallery concerts, which Myra Hess referred to as her ‘national service’. She believed passionately in their symbolic importance, seeing them as a way of satisfying the ‘hunger of the spirit’ she sensed all around her in the early months of the war.

And she felt they were also the answer to another, more practical problem: how the nation’s musicians could support their families after the closure of London’s concert halls and theatres. 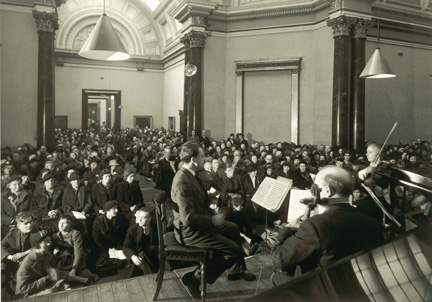 Photograph from the musicians' platform into audience
© The Imperial War Museum

In addition, the concerts satisfied a long-held ambition of Myra Hess to make classical music available to all. A front-row seat at a first rate London concert had rarely, if ever, been available for a shilling before, and the low admission charge made the experience accessible to office workers and tradespeople who were usually priced out of such events.

The public listening to a concert
© The Imperial War Museum

The experiment was to have a significant legacy. When the concerts ended in 1946, commentators pointed out that their success proved how cheaply such events could be staged if the venue were provided by the state.

They argued that the sizable audiences attracted to the National Gallery indicated a public appetite for culture at an affordable price, and stressed the need for other suitable sites to be found.

As a successful example of what could be achieved on a limited budget with state support, the National Gallery concerts made a valuable contribution both to the popularity of classical music in Britain and to the development of the funded arts programme that is still so important today.

Next: Explore the repertoire