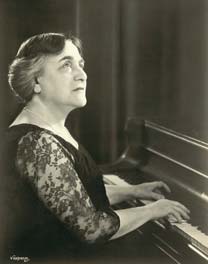 Upon the declaration of war, all cultural institutions – galleries, theatres, concert halls, museums – were shut. With the city under a cultural blackout, Londoners were left with nowhere to go for entertainment.

Once emptied of its paintings, the Gallery itself looked abandoned and forlorn. Kenneth Clark, the Gallery’s director, hoped to keep it open for cultural pursuits rather than war ministry work. He eagerly seized an opportunity offered by the famous concert pianist Myra Hess.

Myra Hess had meant to stop playing the piano for the duration of the war. Soon after war was declared, she held a tea party for some friends. That afternoon she intended to play for one last time before locking the lid of her grand piano. The friends, some of whom were refugees recently arrived from mainland Europe, begged her not to give up playing. The idea of the National Gallery concerts was born.

Myra Hess and the lunchtime concerts

Starved of entertainment, crowds flocked to the Gallery for the lunchtime concerts. These performances were an opportunity to hear the foremost musicians of the day.  Many were given by Myra Hess herself. Favourites in her repertoire were Bach, Beethoven, Brahms and Schumann. The aim was to make classical music accessible to all. The entrance price was set low at one shilling.

The concerts were a huge success. Even in the darkest days of the Blitz, they were nearly always full. An adjoining canteen serving delicious tea, coffee and sandwiches, concocted by a cohort of formidable ladies, added to their popularity. 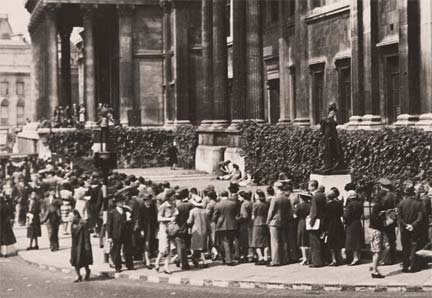 The lunchtime concerts remain one of abiding memories of the Home Front, and are remembered fondly by all those who attended them.