Conflicts with the Trustees

Hendy’s early days as Director were overshadowed by his conflicts with the Trustees, and only settled when Professor Lionel Robbins took over the chairmanship in 1954. Delays in the completion of works by the MoW, the cleaning controversy of 1947 which publicly questioned Hendy’s authority in 'The Times', and misgivings about Hendy’s "daring juxtapositions" in his first rehang (see page 3), all contributed to erode the Trustees’ confidence in Hendy’s abilities as a director. In 1952, the then Chairman, T. S. R. Boase, threatened to terminate Hendy’s tenure on account of the troubled relationships between the Gallery and outside bodies, lack of information and clarity, mismanagement of the Gallery's affairs, and mistrust among staff. 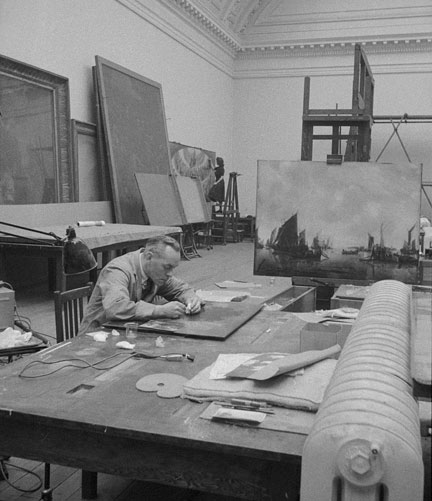 Conservators at work in the Restoration Department in Room 25 (now Room 9), 1946 © The National Gallery, London

While Hendy admitted delays in post-war repairs, he highlighted the improved efficiency in the Gallery, which had made provision for a dozen new offices and laboratories, the equipment of a new Conservation Department and the expansion of the Scientific Department, or the implementation of better standards in the rebuilding process (remodelled floors, damask-covered walls, and comfortable seating). Elsewhere, Hendy resented his limited power to manage the Gallery and particularly his subordination to Trustees on the subject of acquisitions.

While clashes between Directors and Trustees are not exceptional, under Hendy they reflected a tension between an increasingly professionalised body of museum officers and a select group of amateur Trustees who still held the executive power in their hands. Hendy had to navigate this "touchy balance between two loyalties", a task that became easier under Robbins as the Board of Trustees came to include many of Hendy’s personal friends (Henry Moore, Eddie W. Playfair, Denis Mahon, and John Witt). Notwithstanding, towards the end of his career Hendy continued to express disagreement with the constitutional practice of governance by the Board of Trustees and its effect in curtailing the power of staff and the Director.