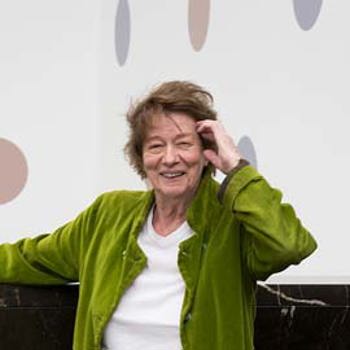 A work created for the National Gallery

See 'Messengers', an large-scale wall painting by Bridget Riley: one of the most important artists of her generation.

The title, ‘Messengers’, is inspired by a phrase Constable used when referring to clouds, and might also be an allusion to the numerous angels, bearers of news, that we see in the skies of so many National Gallery pictures.

Painted directly onto the wall of the Annenberg Court and spanning a vast 10 x 20 metres, the abstract work, comprised of coloured discs, carries influences from our historic collection over into the 21st century. Throughout art history, harmonies of colour have played a large part in pictorial composition.Taking as a point of departure the paintings of George Seurat, in particular Bathers at Asnières, Bridget Riley’s 'Messengers' transforms the Annenberg Court into a great white space in which coloured discs float as clouds drift in the lanes of the sky. By leaving after-images on the viewer's retina that suggest volume and movement the longer it is perceived, the work, which was revealed in January 2019, becomes a tribute to its artistic predecessors and to the process of looking at art itself.

Bridget Riley (born 1931) has a long-standing relationship with the Gallery; she made copies of paintings in the collection including Jan van Eyck’s Portrait of a Man (Self Portrait?), 1433, as a teenager as part of her portfolio when applying to Goldsmiths College, London, just after the end of the Second World War, and Georges Seurat's Bathers at Asnières while training as an artist.

In 1989 Riley was invited to select that year’s 'Artist’s Eye' exhibition and between 2010 and 2011 the Gallery held her acclaimed exhibition 'Bridget Riley: Paintings and Related Work'.

Commissioned by the Board of Trustees of the National Gallery, supported by Rothschild & Co, 2019.