Jan van Eyck, Portrait of a Man (Self Portrait?)

This impassive face is almost certainly that of Jan van Eyck himself, and the painting a powerful statement of his artistic skill. His motto, Als Ich Can, is painted in Greek letters on the upper frame; the words are an abbreviation of a Flemish saying and a pun on Jan’s name: ‘as I[ich/Eyk] can [but not as I would]’. The bottom inscription is in abbreviated Latin and says, ‘Jan van Eyck made me on 21 October 1433’.

The sitter’s clothing is that of a prosperous individual. Most striking is his flamboyant red hat – a chaperon, a headdress for men fashionable in the fifteenth century. The hood, which usually hung down over the wearer’s neck and shoulders, has been piled up on top of the sitter’s head, the long tail wound around it. The strong contrast between the dark shadows in the creases and the bright highlights where the folded fabric catches the light is typical of van Eyck.

This man, his face impassive and his gaze intense, is almost certainly Jan van Eyck himself. No other portraits of him survive to confirm his appearance, but the painting looks like a self portrait: the sitter is craning forward slightly as if looking in a mirror, and the piercing blue eyes gaze in slightly different directions, as if the artist were concentrating on each in turn.

There is no name on the frame, as was usual for Van Eyck’s portraits, but the artist’s motto, Als Ich Can, appears in large Greek letters on the upper frame. The phrase is an abbreviation of a Flemish saying and also a pun on Jan’s name: ‘as I [ich/Eyck] can - but not as I would’. He included it on several paintings, including his portrait of his wife, Margaret (Groeningemuseum, Bruges), although here it is especially prominent.

The words might seem humble, but they subtly draw attention to his extraordinary skill as a painter. Here, limited colours and the intense contrast between the brightly lit face and the dark background make for an arresting image. It seems as if the sitter is turning away from a strong light and towards us. The light casts shadows on his face, making the wrinkles around his left eye, the veins in his left temple and the lines around his mouth stand out. Although it looks astonishingly natural, van Eyck has played with the proportions of both face and body to achieve such a dramatic impact. The sitter’s shoulders are narrow and sloping, and the head enlarged so that it dominates the composition. Technical analysis shows that there is relatively little underdrawing, and what is there suggests that van Eyck adapted the picture during painting. He emphasised certain features, making the nose larger and turning it slightly more into profile than the rest of the face. This was a trick, typical of the artist, to make the face more recognisable.

Although famous for minutely realistic depictions of surface effects, van Eyck painted his pictures with great speed and economy. We can see this in the man’s stubble. If you look closely you can see that it is made up of tiny individual dabs of paint. The darker brown dots were painted before the lighter ones, which are mostly white. On the chin he has mixed a little blue with the white so that the dots seem to catch the light. Van Eyck’s skill is such that the effect of this hasty painting is more convincing than the carefully painted facial hair of Memling’s Saint John or the grey five-o‘clock shadow of David’s Augustinian friar.

This sitter’s clothing – that of a prosperous individual, but not a member of the upper nobility – would have been appropriate for van Eyck. His family were members of the gentry, and he himself was paid a handsome salary as court painter to Philip the Good, Duke of Burgundy. The man wears a houpelande, a loose overgown with long sleeves, belted at the waist, worn by both men and women in the later Middle Ages. The high collar is open at the neck and trimmed with brown fur; underneath we can just see the neck of his white shirt. Most striking is his flamboyant red hat – a chaperon, a headdress for men fashionable in the fifteenth century. The hood, which usually hung down over the wearer’s neck and shoulders, has been piled up on top of the sitter’s head here; we can see the parallel lines of its lower edge rising in a crinkled heap almost to the top of the painting. The long tail has been wrapped around the outside and tucked in above the left eye, perhaps to keep it out of the way while he was painting. The end of the tail flies upwards in an extravagant flourish above the sitter’s right temple. The strong contrast between the dark shadows in the creases and the bright highlights where the folded fabric catches the light is typical of van Eyck.

Some of the colours of the painting have altered over time. The background was once blue – the black is almost certainly overpaint – and the houpelande was a purplish-brown, with vertical pleats across the chest. The gilded frame, which is original, was cleaned in the 1950s. The sides are carved from the same piece of wood as the panel. The top and bottom are separate, and are attached with round pegs: we can see their indents, especially in the word Ich. Similar frames are found on four other surviving paintings by van Eyck, and were perhaps made by the same carpenter. Van Eyck’s motto, his signature and the date are painted to look as if they have been carved into the frame. The bottom inscription is in abbreviated Latin: JOH[ANN]ES DE EYCK ME FECIT AN[N]O M° CCCC° 33° 21 OCTOBRIS (’Jan van Eyck made me on 21 October 1433'). Although a masterly painter, van Eyck was not always a masterly planner. We can see where the ruling of the guidelines for his signature has slipped and been redone, and that he has almost run out of space, so that the letters for October are squeezed in at the end with no room for a full stop.

The back of the panel is now covered with a thin layer of black paint. This is not original, but the back was always intended to be painted: a small area of chalk ground, probably a preparation for the original paint, can be seen towards the lower edge. In the fifteenth century the backs of portraits were often painted. This would have helped prevent the panel warping or cracking by reducing the amount of moisture it could lose or absorb. It might also have been decorative: paintings were not always hung on walls, but were sometimes kept in boxes or bags and displayed on special occasions, meaning that the backs would have been visible.

Portrait of a Man (Self Portrait?)
Jan van Eyck 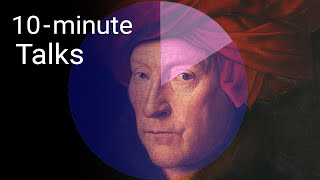 Portrait of a Man ('Léal Souvenir')
Jan van Eyck
This small portrait is puzzling in many ways. We don‘t know who this man was or why he is holding a scroll, which is – rather strangely – inscribed on the outside. The painting’s tall, narrow shape is unusual and there are mysterious inscriptions carved into the very large, cracked stone parapet...
Room 63
The Arnolfini Portrait
Jan van Eyck
This must be one of the most famous and intriguing paintings in the world. A richly dressed man and woman stand in a private room. They are probably Giovanni di Nicolao di Arnolfini, an Italian merchant working in Bruges, and his wife.Although the room is totally plausible – as if Jan van Eyck ha...
Room 63
A Young Man holding a Ring
Follower of Jan van Eyck
We don‘t know the identity of the young man in this small portrait, but his clothes are those of a wealthy individual. The fur of his cuffs and collar is spotted, which is unusual in mid-fifteenth-century Netherlandish painting; it might be lynx. The laced collar of his doublet is perhaps a Germa...
Not on display
Marco Barbarigo
Follower of Jan van Eyck
This serious-looking young man is Marco Barbarigo, known as ‘Marco the Rich’, Venetian consul in London in 1449 and Doge of Venice – the elected head of state – in 1485. This portrait was apparently painted while he was in London: he holds a letter addressed to ‘the eminent and distinguished lord...
On display elsewhere