William Hogarth, the leading British painter of the early 18th century, was determined that his fellow artists should be seen as the equals of their European contemporaries. His paintings of such subjects as Marriage A-la-Mode were reproduced as commercially successful engravings, but his rich and subtle characterisation is most fully evident in the original paintings. Hogarth’s portraits also vividly demonstrate his skilful and economical painting technique, especially his images of colourful characters observed on the streets of London.

Joseph Wright of Derby, Thomas Gainsborough and George Stubbs all painted fashionable members of society in landscape settings. Such paintings might celebrate a union between two families and sometimes the consequent acquisition of land. Gainsborough’s portrait of his family follows a conventional format but in depicting his daughters, for example, he showed off a new creative freedom. His extraordinarily assured painting technique conveys a directness and sympathy for his subject.

John Plampin
Thomas Gainsborough
John Plampin is portrayed here aged about 25. The portrait was probably painted around five years before he inherited Chadacre Hall and the manor of Shimpling, Suffolk, in 1757. Gainsborough shows Plampin on Plampin land. The church tower in the background, though brushed in with only a few touch...
Room 35
Margaret Gainsborough holding a Theorbo
Thomas Gainsborough
This unfinished portrait of Thomas Gainsborough’s youngest daughter, Margaret (1751–1820), playing a theorbo (a kind of lute) unites two particularly personal aspects of the artist’s life and career: his deep affection for his family and friends, and their shared passion for music.The Gainsboroug...
Room 35 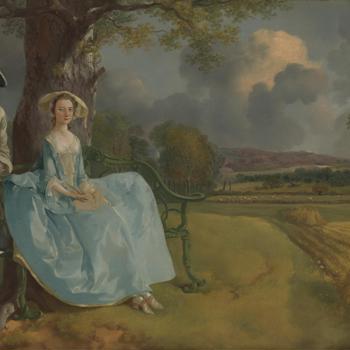