Image: Detail from Raphael, The Garvagh Madonna, about 1509-10

The word provenance derives from the French ‘provenir’ (to come from). It refers to the history of ownership of a work of art.

Provenance can be established through many sources. These include historical documents, such as contracts, inventories, guidebooks, collection and sales catalogues, as well as information on the object itself, such as inscriptions, seals and labels. The history of ownership assumes great importance, especially in proving that a work is authentic or that it has not been stolen.

It is not always easy to track every stage of a painting’s ownership. A painting may have changed hands many times. In the case of paintings by Raphael, there are many compositions called ‘Virgin and child’ (or similar variations). It can therefore be difficult to establish which painting is being described. 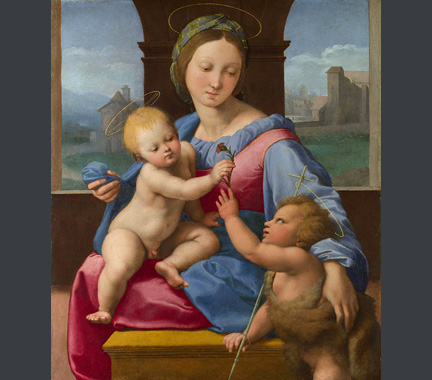 Take the National Gallery’s Raphael’s Virgin and Child with Saint John. It is often known as the 'Aldobrandini Madonna' or the 'Garvagh Madonna'. Albobrandini and Garvagh are the names of families who once owned the painting. Tracing the provenance, tracks the painting's ownership from the Aldobrandini family in the 16th century, to Lord Garvagh, and on to the National Gallery in 1865.

Ownership by the Aldobrandini family

Iacomo Manilli, Villa Borghese, Rome 1650, p. 112
Possibly identical with the ‘Virgin, with Christ, and the little Saint John, […] by Raphael.’

It is probably one of the several Madonnas by Raphael which had passed into Aldobrandini possession with the collection of Lucrezia d’Este, listed in an inventory of 1592.

We know from the art critic Basilius von Ramdohr that Prince Aldobrandini still kept the painting in his apartments as late as the 1780s.

Friedrich Wilhelm Basilius von Ramdohr, 'Ueber Mahlerei und Bildhauerarbeit in Rom, vol. 1, Leipzig' 1787, p. 306
[in the margin:] ‘Part of the palace of Prince Aldobrandini’
‘In that palace, in which now also lives Prince Aldobrandini, uncle of Prince Borghese, are some rooms, in which there is still a selection of paintings, […]’

Friedrich Wilhelm Basilius von Ramdohr, 'Ueber Mahlerei und Bildhauerarbeit in Rom, vol. 1, Leipzig' 1787, p. 307
[in the margin:] ‘A Holy Family by Raphael, of his middle period.’
‘A Holy Family by Raphael. A most precious small painting of his middle period. The composition is very good. The Christ is beautiful, and the Saint John true, only the head of the Madonna compared with the others, is less beautiful. The disegno is most delicate. One notices from the colouring that the master had painted a lot al fresco at that time. The inks are not very much rubbed.’

We can confirm that this is the Gallery’s painting because we can compare it with Seroux d’Agincourt’s illustrated publication of 1823. 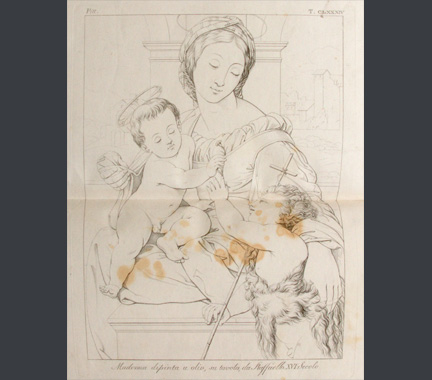 G. B. L. G. Seroux d’Agincourt, 'Storia dell’arte, vol. 6, Prato' 1829 2cnd Italian Ed, p. 485
[…] this painting can be seen in Rome at the Borghese Palace in the apartment of Prince Aldobrandini; the engraving given here is in the same size as the original, on which it was modelled.’

The sale to Lord Garvagh

With Napoleon’s invasion of Italy in 1796, many art treasures were offered for sale by anxious Italians who feared that they would lose them anyway. 'The Aldobrandini Madonna' was first offered for sale in London in 1800–1, after it was acquired by the art dealer Alexander Day in Rome.

It was only in 1818 that Lord Garvagh acquired the picture for his collection. The National Gallery bought the painting from his widow and heirs in 1865 for the very high price of £ 9,000.