When this striking portrait was acquired by the National Gallery, the background was a deep blue and the subject’s hat fitted more closely to his head. Pigment analysis, coupled with an investigation into the painting’s history, helped to date these alterations and suggest why the painting might have undergone such a dramatic transformation. 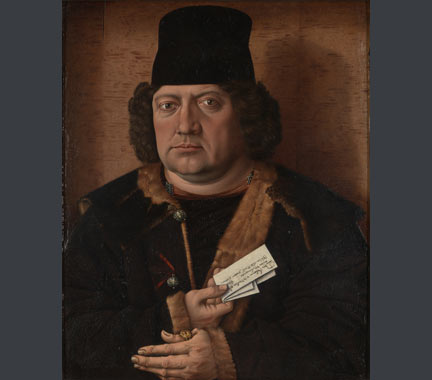 Master of the Mornauer Portrait, Portrait of Alexander Mornauer, about 1464–88

Taking off the mask

When this painting was acquired by the National Gallery in 1990, scientists discovered that neither the brilliant blue background nor the shape of Mornauer's hat reflected the artist's original intent. After conservators had removed an extremely discoloured layer of varnish, scientific examination showed that both the texture and colour of the blue background paint were unusual for the 15th century. 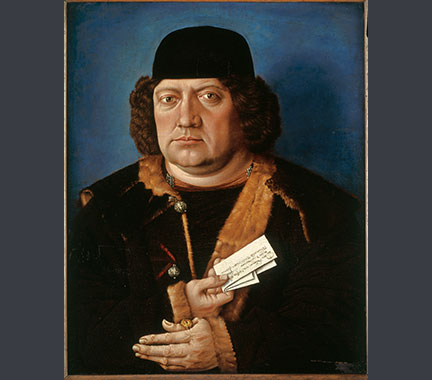 ‘Portrait of Alexander Mornauer', before cleaning

Small paint samples were taken to identify the materials used. Examined in cross-section with EDX, the blue overpaint was found to contain Prussian blue – a pigment invented between 1704 and 1710, but not in widespread use until the 1720s. GC-MS showed that while the original paint was bound in linseed oil (typical for a 15th-century painting), the medium in the overpaint was heat-bodied poppyseed oil, a very rare paint binder for the period. 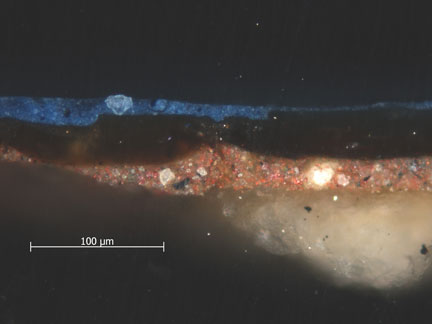 Cross-section of paint sample taken before removal of bright blue overpaint. The original paint is isolated from this later addition by a thick, translucent layer of discoloured varnish

The overpaint was safely removed to reveal a background with a horizontally grained wood pattern, and a taller hat that extends almost to the top of the panel. The original background paint is in excellent condition, so the blue overpaint must have been introduced for some reason other than to hide an area of damage. But when was this done, and why?

When the painting entered the collection of George Nugent-Temple-Grenville, 1st Marquess of Buckingham, between 1788 and 1797, it was called a portrait of Martin Luther by Hans Holbein the Younger. Reproductions and written descriptions indicate the painting was then already in its overpainted state. The figure’s frontal pose is indeed superficially reminiscent of portraits by Holbein painted a few decades later, so the blue background may have been added, and the hat modified, to heighten the resemblance to Holbein’s works. Certainly a portrait by the celebrated master of such a famous sitter would have held greater appeal for the 18th-century collector than a portrait by an anonymous artist of the town clerk of Landshut.

The painting therefore would appear to have been modified between about 1720, when Prussian blue became widely available, and the last decade of the 18th century, when it entered the Buckingham collection. The changes were almost certainly made to pass the painting off as a work by Holbein.

In addition to the later alterations, X-radiographs and infrared reflectograms revealed other changes made by the artist while he was painting. The most significant of these was to Mornauer’s left hand, which was first underdrawn and painted with the thumb pointing downwards and the fingers disappearing into the folds of his coat. 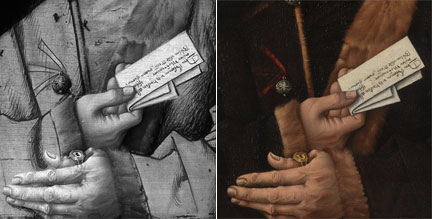 Detail of infrared reflectogram, showing changes to the position of the sitter's left hand

Other changes, albeit unintentional ones, have also affected the portrait’s appearance since it was first created. Over time the red lake pigments used in Mornauer’s hat, robe and underrobe have faded, and these areas now appear darker and more brown.