A dark 19th-century varnish so obscured The Rape of Europa that by the middle of the 20th century it was thought to be 'fraudulent' – despite its history in collections famous for their high-quality Venetian works. In 1999 the removal of this varnish, combined with scientific and curatorial research, helped to reinstate a prized canvas by Paolo Veronese. 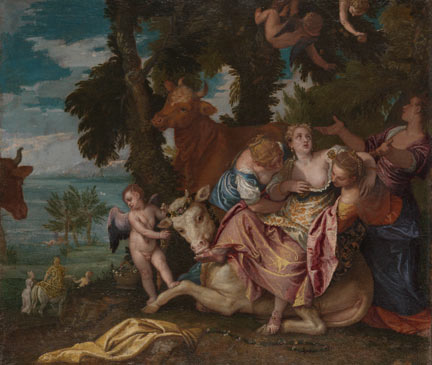 Paolo Veronese, The Rape of Europa, about 1570

This small painting of ‘The Rape of Europa’ was described as a work by Veronese from the time of its first mention in the inventory of the collection of the Holy Roman Emperor Rudolf II, made sometime after 1637. Even after it entered the collection of the National Gallery in 1831, as part of the bequest of the Reverend Holwell Carr, the painting was widely admired as a work of this Venetian master.

In the intervening years it had passed through the hands of some of the most discerning collectors in Europe, including Queen Christina of Sweden and the Duc d’Orléans. Indeed, the picture’s prominent display in the latter’s collection at the Palais-Royal in Paris, as well as its high valuation, testify to the esteem in which it was held.

The effect of the varnish

When the picture arrived at the National Gallery in 1831, it would seem that the painting was relatively unobscured by discoloured varnish as its colours were praised by connoisseurs. By 1851, however, there were reports that the varnish had darkened. Conservation records at the National Gallery indicate that a further layer of varnish was added in 1881. By the time the painting was cleaned in early 1999, it had one of the darkest varnishes of any painting in the collection.

‘The Rape of Europa’ was sampled at this time, revealing two layers of varnish in cross-section. The upper layer, presumably that added in 1881, was an ordinary mastic varnish, which had slightly discoloured. Below it was another varnish of mastic mixed with some African copaiba, or illurin balsam – probably added to provide a warm tone and to make the varnish less brittle.

Unfortunately copaiba also tends to darken relatively rapidly, turning this varnish brown and radically altering the tonality of the painting. Colours were suppressed and the effect of Veronese’s delicate brushwork diminished. It comes as little surprise, therefore, that the 1913 ‘Illustrated Catalogue’ demoted the painting to ‘School of Veronese’. The picture’s decline continued, to the point of being described in the 1950s as 'painted with fraudulent intent', despite its illustrious provenance.

Rediscovery of a Veronese 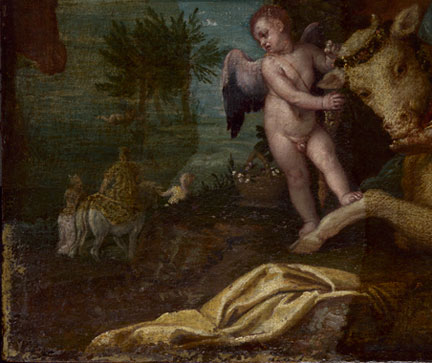 The bottom left quadrant of the picture during cleaning in 1999

The varnish was removed in 1999, revealing the fine quality of the painting for the first time since the early 19th century. Investigation of the technique and support were undertaken at the same time. Although the canvas was originally on a stretcher, it had subsequently been glued to an oak panel. Dendrochronological analysis showed that the wood came from the Baltic/Polish region, from a tree felled either in the late 1610s or, more probably, in the 1620s. 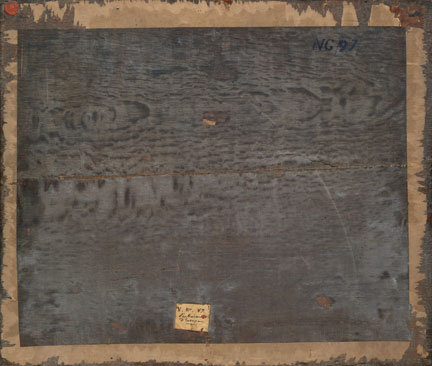 The reverse of the panel, showing the two 17th-century oak boards onto which the canvas is glued

The canvas was prepared with a thin beige imprimatura over the gesso. The blue pigment was identified as azurite, while red lake (identified as cochineal) was glazed over lead white to produce the pink lining of Europa’s cloak, and mixed with red lead and lead white in the warm pink of her skirt. The yellow highlights over pink – a conceit characteristic of the painter – are lead-tin yellow. The binding medium was found to be walnut oil. In short, the technique, palette and materials were all entirely consistent with a painting by Veronese which, together with the distinguished provenance, helped to make the case for the reattribution.

The significance of its size

The reattribution to Veronese has an important consequence, however. As the painter treated the subject on several occasions, in versions generally much larger than the National Gallery’s painting, accepting the attribution to Veronese requires one to acknowledge that small-scale pictures are not necessary reductions of finished canvases. They might instead be rehearsals for larger pictures. It is quite possible, then, that the Gallery’s picture began life as a modello for a larger painting and was subsequently sold as a small-scale cabinet picture.