Acquired in 1858, this painting was attributed to Filippino Lippi and thought to date from 1492, on the basis of an inscription. But when the inscription was discovered to be a later addition, the association with this date fell away. So, too, did the connection with Filippino, until a new restoration brought to light the fine quality of the piece, and with it a new attribution to the young Botticelli. 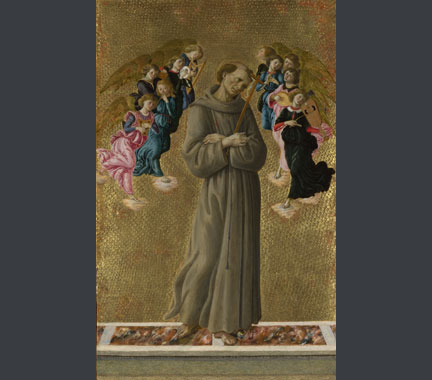 Botticelli, Saint Francis of Assisi with Angels, about 1475–80

Acquisition by the Gallery

‘Saint Francis of Assisi with Angels’ was acquired in 1858 by the then Director, Sir Charles Eastlake, from the collection of Count Giovanni Battista Costabili (1756–1841) in Ferrara, Italy. Although initially thought to be a work by Filippino, scholars soon advanced alternative suggestions, including Botticini, Raffaellino del Garbo and the workshop of Botticelli.

When the painting arrived in the National Gallery, it bore an inscription along its bottom edge which read ‘HVNC SEQVANTVR. HVIC IVGANTVR. QVI EX EGIPTO EXEVNT. IN QVO NOBIS CLARA. LVCA. /VEXILLA. REGIS. PRODEVNT. AD. MCCCXCII’ (Let those who depart out of Egypt follow him, and be united to him, in whom the standards of the king come forth, for us, in clear light AD 1492). 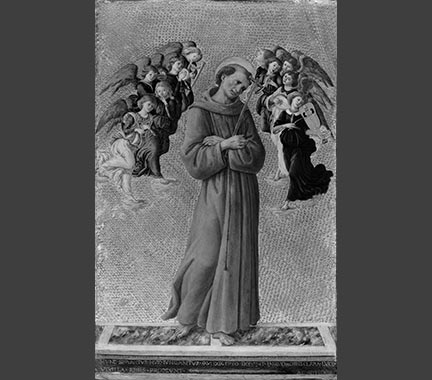 Before restoration in 1940, showing inscription along bottom edge

It derived from the ‘Decus morum’, a Franciscan hymn attributed to Thomas of Capua, which formed part of the Office of Vespers for the Feast of the Stigmata on 17 September. Given the renewed religious fervour during the early 1490s, when the Dominican Fra Girolamo Savonarola castigated Florentines for their impious and luxurious living, the combination of this date with a sacred exhortation on a panel made for private devotion seemed entirely plausible.

Connoisseurs were, however, at a loss to align the style of the work with this date. As the art historian Bernard Berenson rightly noted, it most resembled the works of the young Botticelli painted 20 years earlier during the 1470s. Berenson resolved that the painting must, therefore, be a later copy of a lost work.

During restoration in 1940, however, the inscription was found to be of a later date. It was consequently removed by the restorer Sebastian Isepp who – to judge from a pre-restoration photograph – also removed extensive repainting. The repaint had probably been added before the picture arrived in the Gallery and, being bound in an oil medium, it proved hard to remove completely. Instead Isepp let certain passages remain, retouching them with watercolour.

Unfortunately his attempt to disguise the earlier retouchings lessened the sense of the painting’s quality. As a result, despite being released from a date in the 1490s, the painting’s direct association with Botticelli continued to be denied. The curator Martin Davies catalogued it in 1951 as by an unknown follower of Botticelli, probably by the same hand as the ‘Madonna and Child with Five Angels’ in the Louvre, Paris, which he also rejected as the master’s work.

The painting was re-examined in 2002 by curators, scientists and conservators, after which it was again restored. The reassessment and cleaning brought to light both its high quality and the close technical and stylistic affinities that it shares with other works by Botticelli from the second half of the 1470s.

From under the layers of dirt and repainting emerged an autograph panel by the celebrated Florentine master, comparable in style to his various treatments of the adoration of the Kings, including the tondo in the National Gallery. 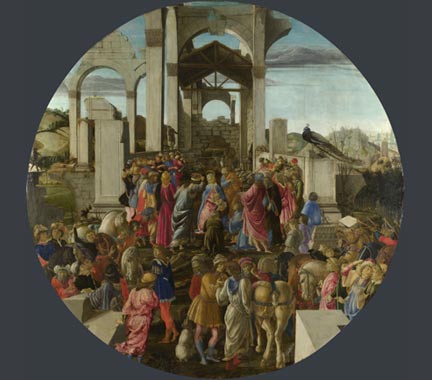 Sandro Botticelli, The Adoration of the Kings, about 1470–5

The heart-shaped faces of the angels are typical of Botticelli’s work at this time. Their ethereal, hovering forms find close analogies in his later drawings for the ‘Divine Comedy’, the San Marco ‘Coronation of the Virgin’ (which also has a partially-gilt ground) and the Mystic Nativity in the National Gallery. Moreover the comparison with the Louvre painting, which Davies had proposed by way of demoting its status, only lends support to the attribution. This painting too is now widely held to be by Botticelli, working around 1468–70.

‘Saint Francis of Assisi with Angels’ is painted on a single piece of poplar which, although its margins are slightly trimmed, retains its original dimensions (to judge from the partial survival of a barb, a raised crust of paint indicating where the edge of the panel was originally joined to its frame). As is typical for Florentine paintings at this date, it is painted in egg tempera. 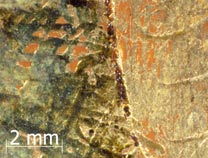 Drying oil might be present in the residues of translucent glazes that would have originally coloured the gilding of the angels’ wings on the left. This was presumably introduced to create a particular visual effect and might have helped counteract the lack of depth caused by the gilded ground.

The traces of the glazes only survive in the incised lines of the gilding on the angels’ wings. The glazes appear to have been a copper-containing green and brown glaze, picked out with red lake on the edge of the feathers.

Analysis of the paint removed from the area of the inscription in 1940 showed it to contain Prussian blue, a pigment that only came into use during the first decade of the 18th century. The inscription was recorded by Laderchi in his catalogue of the Costabili collection in 1838–41, which provides the latest date for its addition. Beneath this layer, however, were particles of azurite, over which lay a small fragment of gold leaf. It is thus possible that the inscription was added in the 18th, or very early 19th century, following the form of an earlier inscription which had become worn. Sally Korman has speculated that the date ‘1492’ might have been a misreading of the original date, but it is also possible that an inscription was added in 1492.

The pattern on the gold background is created with two punches – one with six points, another with five – over a diaper pattern. As these marks extend over the pigment layer of the marble parapet, they were added – somewhat unusually – after the panel had been painted. It has been speculated that the smaller, five-point punch might have been lost during the process, as the lower section is only worked with the six-point punch. The gilding itself is highly burnished, and so very reflective. Although not unknown at this date, gold-ground paintings were somewhat old-fashioned, and so it has been argued that it might have been produced from a non-Florentine patron. It is an aesthetic more readily associated with Siena than Florence. The gold ground would certainly have discouraged later connoisseurs from associating the painting with Botticelli.

The skin tones are prepared with lead white mixed with a small amount of green earth. They are nonetheless very clear, almost white, similar to the preparation of those in ‘The Adoration of the Kings’, and quite unlike the skin tones in paintings by Filippino which seem greener and darker. The limited number of pigments used in the panel is also typical of Botticelli and, more generally, of Florentine painters at this date.

The most interesting of these is the green pigment used in the angels’ green draperies. It is of a particular type, containing not only malachite (copper carbonate, which has reacted with the egg to cause the binding medium to darken), but small amounts of other, more rare, minerals containing copper, zinc and other elements. This mixture reflects the specific geological deposit from which the mineral came and has been found in other Italian works of the period, including some from the workshops of Botticelli and David Ghirlandaio (such as The Virgin and Child with Saint John). 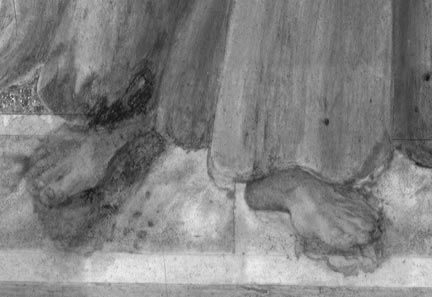 Infrared reflectogram of feet, 'Saint Francis of Assisi with Angels’, showing the freedom of the underdrawing

Botticelli has evidently had some problems in fixing the position of the saint’s feet. A notable pentimento is visible to the naked eye in the area of his right foot, revealed more fully in an infrared. The infrared reflectogram also shows the full freedom of the underdrawing, dispelling once and for all Berenson’s idea that the painting is a copy of a lost work.