The painting was cleaned and restored in 1913.

The painting is not in good condition: the entire background, including the stony ground, is overpainted and the flesh paint has been extensively retouched; some of the overpainting of the background appears milky and some has wrinkled badly. There is a splash of blue paint halfway up the left edge which is clearly not original. There have been some paint losses along the split (see below) and there are a number of scratches and cracks. The retouching of the flesh paint, which appears to be very worn, is evident in numerous places, for instance in the baby’s hand and legs, and in Charity’s knees. The inscription ‘Charitas’ has been repainted and the winged serpent signature has been altered.

The support consists of a wood panel made from two vertically grained beechwood boards.2 The join is not quite vertical, the left-hand board measuring 5.7 cm at the top (verso) and 7.0 cm at the bottom (verso). The join is reinforced with a fibrous substance, and an area to the right at the bottom has been removed, thinning the panel. A rebate approximately 1.0 cm wide and 0.5 cm deep has been cut around all four sides. The two corners on the right (verso) of the panel have been replaced. A mended split extends 14.0 cm into the painting from the top edge and 14.0 cm from the left (verso). There is extensive worm damage, particularly in the right half of the panel, extending to the added corners.

According to the dendrochronological analysis,3 board I has 145 growth rings dating from 1533–1379; no dating could be obtained for the 21 growth rings of board II. Since only the bark was removed from beechwood and the whole tree trunk used, the earliest felling date for the wood of board I is 1533; with one year’s storage time a creation date for the painting of 1534 onwards is plausible.

On the reverse of the panel are various inscriptions: there is a V in black paint and inscriptions in ink, including what may be a date, ‘1 5/8–9’, with (above) a word beginning with K and ending in ch.

Infrared reflectography revealed little underdrawing and there was no penetration of the background paint. In most places simple linear outlining in the surface paint masks any possible underdrawing. Dark lines under the surface paint, for instance in the faces, were presumably intended to be visible. With the aid of the stereomicroscope it was possible to see red outlines along the right-hand edges of the girl’s legs, in the right side of Charity’s right thigh, in between the tops of her legs and on the left-hand sides of her calves, as well as on both outside edges of the standing leg of the boy (fig. 1). There may be pentiments along the back of the child on the right and on the girl’s leg. 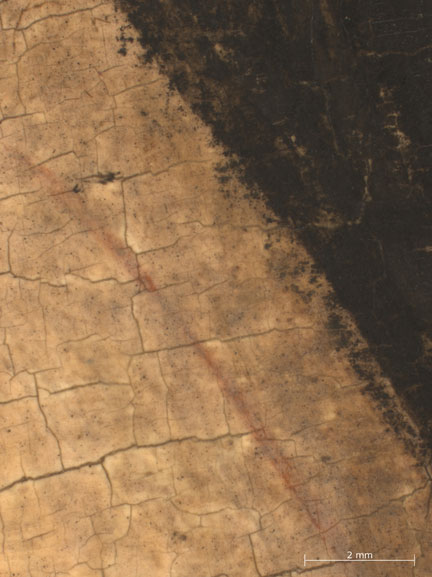 fig. 1 Detail from NG2925 showing red outlines of the leg of the left-hand figure seen through a stereomicroscope

The medium was identified by GC analysis as linseed oil.

2. Confirmed as beechwood in a report of 19 November 1993 by Dr Peter Klein in NG dossier.