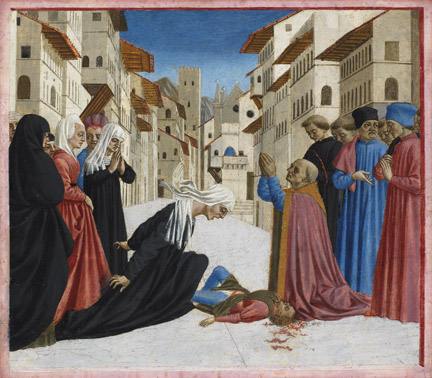 This is one of five predella panels which Domenico Veneziano painted for his Saint Lucy Altarpiece,1 one of the most innovative paintings produced in mid-15th-century Florence. 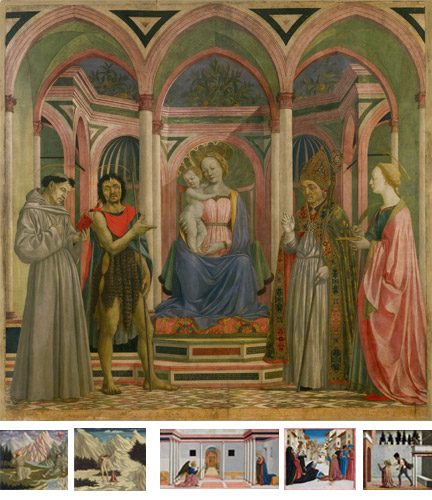 The predella panels are now dispersed among four museums, but this one was originally to the right of centre, immediately below the figure of Saint Zenobius in the main panel. Saint Zenobius (about 350–about 424) was a patron saint of Florence, notable as a local saint who claimed to be a member of the elite Florentine Girolami family, and as an illustrious bishop. His cult had been active throughout the late Middle Ages and was revived after his corpse was rediscovered in the Cathedral crypt in 1331, leading eventually to the translation of his relics into a magnificent shrine in the new Cathedral choir in 1439.2 His life story had been circulated in various versions from the eleventh century. One written in the mid-fourteenth century may have informed Domenico Veneziano’s visual narrative, although Giovanni Tortelli’s text (written between 1439 and 1440) was the most likely source.3

Of all the miracles performed by Saint Zenobius, the one shown here was probably selected for its emotive content, as well as its connection to a particular Florentine location and the processional rituals performed there. A widow from Gaul left her son in the care of Saint Zenobius while she continued on her pilgrimage to Rome. Discovering on her return that her child had just died, the desperate widow found Saint Zenobius in the Borgo degli Albizzi on his way from the church of San Pier Maggiore, and appealed to him to revive her son. The architectural design of this panel is in absolute contrast to the quiet, calm, airy spaciousness of the Annunciation adjacent to it in Veneziano’s predella. The steeply receding perspective, with its ineluctable focus, and the compressed, crammed-in buildings, create greater tension and dramatic force. At the same time, by designing an urban setting for this narrative, Domenico Veneziano stresses the local power of the saint and this miracle. Whereas the houses flanking the street are probably generic but varied palace types rather than exact portrayals of actual buildings, the distinctive form of San Pier Maggiore, and the configuration of street, church, city gate and hills (still visible from Borgo degli Albizzi today) are specific local markers which would have been recognised by Florentine viewers. 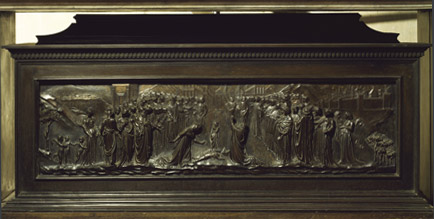 The perspectival composition of Domenico Veneziano’s panel may have been inspired by Ghiberti’s bronze relief of the same subject for Florence Cathedral (fig. 2), with its astonishing manipulation of single-point perspective around a central axis and the arrangement of figures in a great V-shape, diminishing towards a piazza with great palaces flanking a church with a temple front. However, the treatment and style of the architecture, as well as the rhetorical result, are entirely different in Veneziano’s picture.4 In his scene, buildings perform the role enacted by figures in Ghiberti’s relief, thus creating a new type of street-oriented view. Ghiberti represents a magnificent, idealised place, a dream-like utopia, whereas Domenico’s houses are based on countless existing Florentine examples, with more modest, down-to-earth features such as wooden eaves and extensions overhanging the street (‘sporti’). This makes Zenobius’s miracle more accessible, more relevant and more affective. This no doubt was partly because it was a small predella panel painted for a small church, rather than a bronze shrine for the most prominent position in Florence’s Cathedral.

The architecture seems to have been drawn and painted before the figures (note the transparent red headdress of the woman in blue with swivelled eyes, at the back of the female group), and the positions of the figures mimic the structure of the street itself. The female and male observers are grouped on either side of the street, standing in front of the vertical palace façades. The dead child lies prostrate on the flat horizontal road, while the kneeling figures of mother and saint mediate and intercede between the standing and lying forms. This tight interconnection between architecture and figure underpins the composition and the narrative, constructing the dramatic effect of the painting.