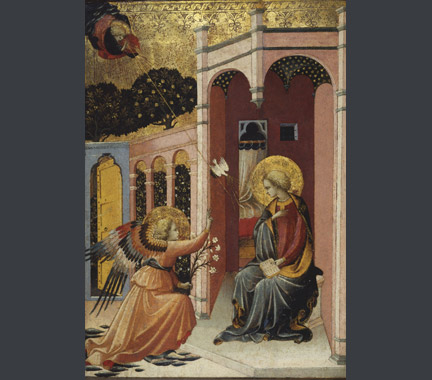 This delicate ‘Annunciation’ by the anonymous painter known as the Master of the Judgement of Paris is typical in many ways of Florentine Annunciations of this period. Although we know nothing of the circumstances of its commission, given its small size we can hypothesise that it was originally used as a devotional work within a household. The architecture in the panel forms a dynamic sweep from left to right, and from the background to the foreground of the painting. It begins with the gateway on the far left, a simple ogival arch in grey stone within which a wooden door is slightly ajar. Being half-open, the door may act within the narrative, indicating to the viewer where Gabriel entered the scene. It is likely too that it is symbolic; the Virgin was often metaphorically described as the ‘gateway of heaven’ (‘porta coeli’) as it was through her that Christ came into the world from heaven, an attribute alluded to pictorially in numerous Annunciations through the motif of an open door.1

A screen-like salmon pink wall, punctured by a series of tall, narrow arches through which a garden with trees and flowers can be seen, structurally connects this gateway to Mary’s loggia. This glimpsed garden is another symbolic element within the painting, referring to the ‘hortus conclusus’ (enclosed garden), a common metaphor in the period for Mary’s purity and perpetual virginity. The architectural sweep ends in the loggia where Mary sits, which has broad, round arched openings on two sides. The corner pier has been removed so that it does not obscure the figure of the Virgin.2 Although the exterior of this graceful structure is relatively unadorned, a more lavish note is struck in the interior, where a star-strewn vault provides an appropriately celestial canopy for Mary. Also visible inside is a doorway that allows us a glimpse of her bedroom, filled with a large bed partially screened by a white curtain.

The architectural layout of this work follows what can be described as the ‘classic’ Italian composition for the depiction of the Annunciation, in which Mary is placed inside a structure while Gabriel greets her from outside.3 This split composition is one of the key features that distinguish 14th- and 15th-century Italian representations of the Annunciation from their Northern European counterparts, which usually place the angel and Mary within the same undivided room. The origins of this Italianate ‘split’ Annunciation have been traced by numerous scholars to Duccio’s 'Annunciation' from the ‘Maestà’ , which may have been the first work to adopt this solution.4 Although viewed at a very different angle, the architectural composition in this panel directly reflects that in Duccio’s work, where an entrance on the left is joined by a screen-like wall to Mary’s porch on the right. Importantly, by following Duccio’s compositional model, the painter of this panel makes architecture a fundamental organisational element within the picture, using the loggia to create a visual distinction between Mary and her angelic visitor.

This distinction is, however, a subtle one created by the particular architectonic character of the loggia, a structure that is simultaneously open and closed. Access is possible, as the openness of the space makes clear, yet at the same time the loggia remains an enclosed zone, its edges clearly circumscribed. This dual nature is powerfully expressed in this work by the figure of Gabriel, whose hand rests respectfully at the very edge of the loggia as if brought to a halt by an invisible barrier (fig. 1). 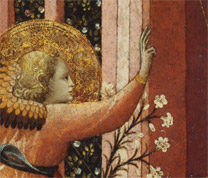 The inviolate, protected nature of the loggia renders it particularly suitable as a space for Mary, whose perpetual chastity is one of her central attributes. Alongside this, the loggia’s form also echoes that of the micro-architectural edifices that housed sacred objects and images in this period, most especially the street corner tabernacles scattered throughout Florence, an excellent example of which is the late 14th-century tabernacle at the corner of the Via delle Casine and the Via dei Malcontenti. Mary, the bearer of Christ, was herself commonly described as the tabernacle of the Lord. In Saint Bernardino’s words ‘El tabernacolo di Iesu fu Maria’ (Mary was the tabernacle of Jesus) – a metaphor that receives architectural expression here.5 Furthermore, on a practical level, the street tabernacle, a structure designed to house, frame, and draw attention to a sacred image or object, is a natural choice for a painter who wishes to enclose and dignify Mary, and an architectural means of conferring upon her both sacrality and status, communicated in a visual language entirely familiar to a 15th-century viewer.

To cite this essay we suggest using
Alasdair Flint, ‘Master of the Judgement of Paris, The Annunciation’ published online 2014, in 'Building the Picture: Architecture in Italian Renaissance Painting', The National Gallery, London, http://www.nationalgallery.org.uk/research/research-resources/exhibition-catalogues/building-the-picture/place-making/master-judgement-of-paris-annunciation