2. Between real and imagined places

The example of Domenico Veneziano’s street tabernacle draws our attention to how paintings function ‘in’ a place, but artists were equally concerned with making paintings ‘of’ places. These range from attempts to create an accurate imitation of the locality, as Brunelleschi did in his portrait panels of the Baptistery and the Piazza Signoria, to invented mythological or fantasy places that bear little or no known relation to real ones. Most images are to be found somewhere on a spectrum between real and fantastic representation.

The power of architecture to create a distinctive, autonomous identity for a place was universally recognised. Buildings tend to dominate and define their localities, as is evident from famous examples such as the Cathedral and Palazzo Vecchio in Florence (figs. 6 and 7), or San Marco and the Doge’s Palace in Venice (figs. 7 and 8). 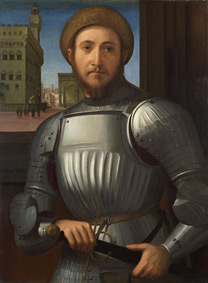 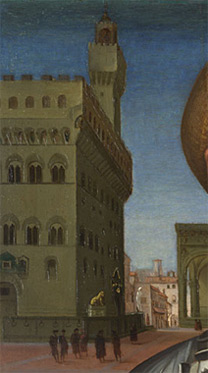 Painters incorporated this power into their pictures, using buildings to identify a place, to make it vivid, to locate a narrative, to draw attention to key aspects of the story, and to enhance its emotive, moral or religious content. Inventing places was as fundamental to the creative process as the invention of figures. 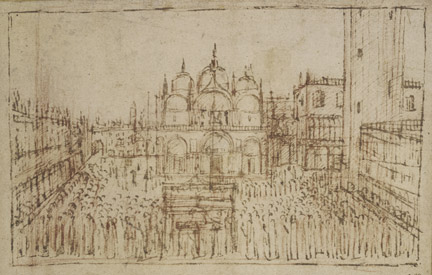 Representations of place cluster around particular iconic and immediately recognisable buildings which came to stand for a place. Gentile Bellini’s ‘Procession in Piazza San Marco’ (fig. 8) is often cited as a precise topographical drawing, recording the Basilica of San Marco with its piazza.7 Yet, while Gentile adopted an accurate approach for features such as the bronze horses on the façade of San Marco, the figures on top of the pinnacles of the domes, and the merlons on the rooflines of the Doge’s Palace and the Procuratie Vecchie, he subtly altered some of the most important structural components and relationships between buildings on the piazza (fig. 9). 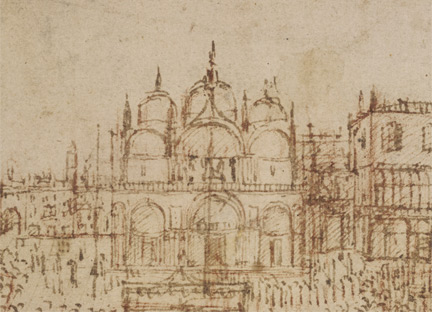 9. Detail of the basilica and Doge's Palace.

He reduced San Marco’s facade to three main bays (with two extremely narrow bays either side) rather than the actual five main bays; he moved the Doge’s Palace to the left to bring it closer to the basilica; and he also shifted the Campanile to the right and forwards in front of the Ospizio Orseolo (later rebuilt as the Procuratie Nuove).8 Gentile stressed the extensive space of the piazza in his drawing and particularly in his final painting, taking a bird’s-eye view looking down on the square and arranging the buildings either parallel to the picture plane for San Marco and the Doge’s Palace, or at right angles to it, as in the case of the Procuratie Vecchie and Ospizio Orseolo. 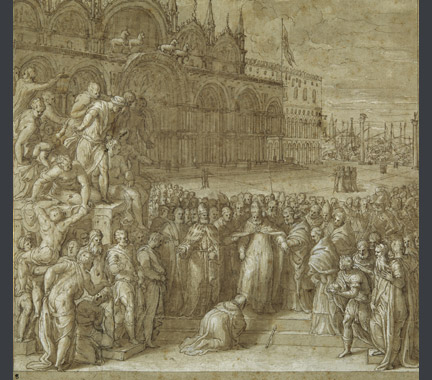 Giuseppe Porta drew the same location in his modello for ‘The reconciliation between Pope Alexander III and Frederick Barbarossa, in the presence of Doge Sebastiano Ziani’,9 but took the opposite approach, compressing the space of Piazza San Marco, choosing an oblique viewpoint that creates a diagonal sweep for the buildings, so that San Marco dominates the setting, its upper arches rising beyond the limits of the picture (fig. 10). Its domes and deep structure are therefore out of sight, and the building becomes all façade. Porta turned San Marco into a more spreading structure that looms over and blocks the view of the Doge’s Palace, as though he were seeking to celebrate the religious power of the Doge, rather than his political status. The important ceremonial entrance to the Doge’s Palace – the Porta della Carta, normally visible between San Marco and the palace, is hidden and we only see the right half of the Doge’s Palace. The architectural protagonist of San Marco is meticulously rendered, its quadriga of bronze horses adopting a lively trot, and the mosaic stories in the lunette arches suggested in a soft, impressionistic manner (fig. 11). 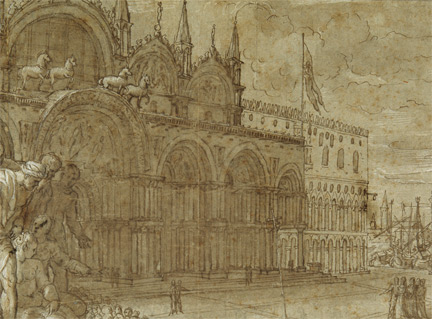 Porta amalgamated what the Venetians perceived as two different but adjacent spaces: the Piazza San Marco (a vast east-west oriented space directly facing the façade of San Marco) and at right angles to it, the Piazzetta (a smaller north-south oriented space running along the façade of the Doge’s Palace). This area facing the lagoon and the Molo (quayside) was a key point of embarkation and disembarkation, and of great ceremonial importance for Venetian public life. By eliding the two spaces Porta created a single great civic piazza that combines the beauty and fame of San Marco’s façade with the distant view of ships on the lagoon, both of which are so distinctive to Venice.

Bellini’s and Porta’s two drawings of Venice are examples of artists’ subtle manipulation of topographical and architectural realities. The representation of places was in any case a question of degrees or levels, rather than of absolutes. Every depiction of place is an interpretation and is no more precise an imitation of the ‘real’ than portraits of people, whose likenesses are notoriously fickle. Artists modify and transfigure the imitated object. Furthermore, painters often juxtapose or interweave real and imagined buildings, creating hybrids that graft parts of real buildings onto parts of imagined buildings. Infinite combinations and inventions are possible. In Biagio d’Antonio’s two Trojan cassone panels the city views are tightly structured and conceived so as to create an image of Troy by combining famous buildings from Florence, Venice and Rome, which are then modified, overlapped and compressed into a new whole (figs. 12 and 13). 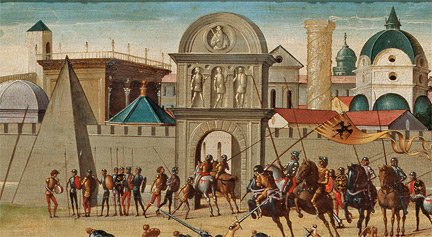 12. Detail from Biagio d'Antonio, 'The Siege of Troy, The Death of Hector', about 1490–5, including versions of the pyramid of Caius Cestius and Trajan's Column in Rome, and from Florence the Loggia dei Lanzi, the roof of the Baptistery and the Cathedral. © Fitzwilliam Museum, Cambridge/Scala, Florence. 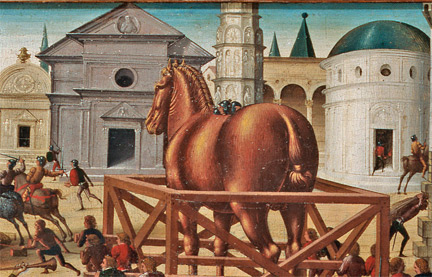 13. Detail from Biagio di Antonio, 'The Siege of Troy, The Wooden Horse' about 1490–5, including innovative designs for church facades and a centrally planned temple. © Fitzwilliam Museum, Cambridge/Scala, Florence.