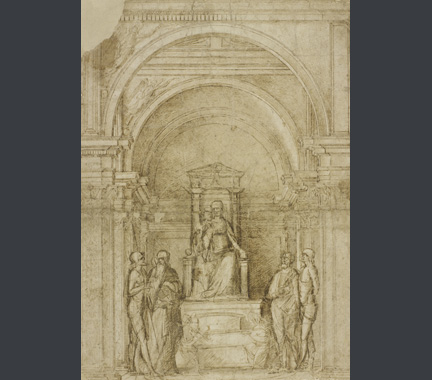 Alvise Vivarini was the last – and greatest – painter of the only Venetian pictorial dynasty to rival that of Jacopo Bellini and his sons. Alvise’s career was relatively short, and he died in penury in the early 16th century. But his best portraits (fig. 1) approach the psychological acuity of works like Giovanni Bellini's ‘Doge Leonardo Loredan’ (fig. 2). 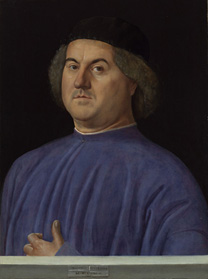 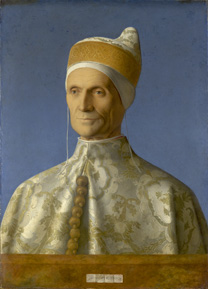 His large-scale religious compositions also have a sophistication and spatial complexity to match anything by his more celebrated contemporaries Giovanni Bellini or Cima da Conegliano (fig. 3). 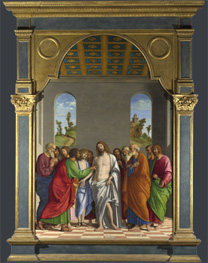 The 16th-century Tuscan artist and writer Giorgio Vasari praised Vivarini for his ‘buildings wrought most beautifully in perspective’, seen in his contributions to the narrative cycle of the history of Venice painted in the Great Council Hall in the Doge’s Palace. These were destroyed in a devastating fire of 1577, but Alvise’s surviving large-scale projects, including his drawing of the ‘Altarpiece of Saint Ambrose’ (see fig. 4), and other lost works, suggest that he was an artist for whom the construction of impressive architectural vistas was particularly important.

Vivarini's drawing – an unusually large one for the late 15th century – is a full compositional study for what must have been a very ambitious altarpiece, a ‘Sacra Conversazione’ of the type popularised by Giovanni Bellini and Cima. The drawing’s function as a working tool is clear, from the damage, folds and tears on the sheet, as well as from the varying degrees of completion of the architectural decoration. This has been highly worked up on the left side of the composition, with delicate foliate patterns adorning the columns of the pilasters, but left incomplete on the right, because there was no need for the artist to finish both sides. Had the sheet been made as a presentation drawing, it would have had a much more consistent level of finish.

Although it contains figures, this drawing was essentially made to plan and elaborate the architectonic aspects of Alvise’s composition. It shows evidence of the meticulous preparation of the architectural elements. The sheet is covered with an extensive network of lines ruled with a stylus, particularly apparent if the drawing is looked at with raking light, or from a sharp angle. These lines were used to formulate the architectural structure, and in particular to plan the five receding columns on either side of the central arch. A vanishing point, drawn with the point of a brush, survives as a dot in the centre of the base of the Virgin’s throne. It is rare to see this so clearly on a Venetian drawing at this date.

Vivarini designed his altarpiece as a convincing architectural space, to enhance the illusion that the person standing (or kneeling) before it in a church was looking into a further, divine world. Spatial recession encourages the sense that the picture is not an image, but a chapel within a church. Through a grand fictive arch, we look into the crossing of a church; four arches are supported on pilasters and a flat coffered ceiling can be discerned above. Against the back wall of this building stands an immense throne for the Virgin Mary and her infant son, its size marked by the fact that the pediment extends far above the cornice. Beyond Mary there extends a short barrel-vaulted interior, with further arches stretching away into the distance. Mary wears no crown but her placement on a throne, flanked by four standing saints, marks her out effectively as Queen of Heaven. The figures, seen against the flat-backed wall, recall contemporary Venetian tomb monuments, such as those of Pietro Lombardo1, as well as the architecture of Mauro Codussi, especially the entrance into the Bernabò Chapel in the Venetian church of San Giovanni Crisostomo (about 1499).2

Vivarini painted a similar pedimented throne in an altarpiece of about 1485 (destroyed in Berlin in 1945) of the ‘Virgin and Child Enthroned with Six Saints’. This picture was probably made for the Scuola di Santa Maria dei Battuti, Belluno (where it is first recorded, for certain, in 1805). Formal connections exist between the present drawing and this painting, notably in the construction of a flat-backed wall rather than an apse for the chapel, and the enormous pediment of the Virgin’s throne. However, there are even closer links between the drawn architecture of this sheet, and Alvise’s last dated altarpiece, of 1503, which still stands in the Capella dei Milanesi in Venice’s Santa Maria Gloriosa dei Frari. 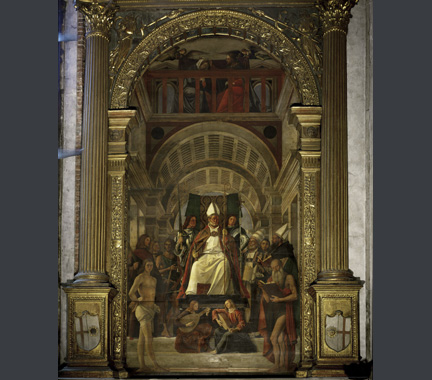 Although completed by Marco Basaiti, the conception was Alvise’s. The capitals, their decorated pilasters, the cornices, and the figures in the spandrels of the arches, are very close in both works. But most interestingly, in both painting and drawing the first set of pilasters – unlike all the others – are not drawn in perspective. In the altarpiece, they are part of the frame, not the painting, and a similar arrangement is implied in the drawing. It is evident that Alvise Vivarini conceived the frames and painted surface of both compositions as one work of art. The success of both was predicated on the convincing illusion of the fictive architecture, and its successful integration with the physical architecture of the frame elements.

To cite this essay we suggest using
Caroline Campbell, ‘Alvise Vivarini, The Virgin and Child Enthroned in a Chapel’ published online 2014, in 'Building the Picture: Architecture in Italian Renaissance Painting', The National Gallery, London, http://www.nationalgallery.org.uk/research/research-resources/exhibition-catalogues/building-the-picture/constructing-the-picture/vivarini-virgin-and-child