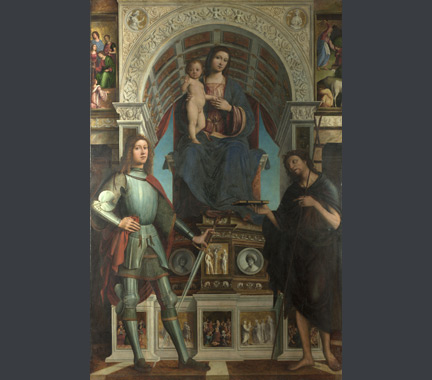 This monumental altarpiece1 exemplifies the type of picture developed by the Ferrarese painter Ercole de’ Roberti to achieve in a single painting some of the devotional inventiveness offered by a multi-panel altarpiece, or polyptych (fig. 1). By the late 15th century, the polyptych was considered old-fashioned, yet it had advantages, primarily because it permitted the telling of multiple religious stories. Ercole’s innovation was to structure his pictures around complex architectural elements, such as elevated thrones, so that a single painted panel could retain some of the compositional variety of a polyptych.2 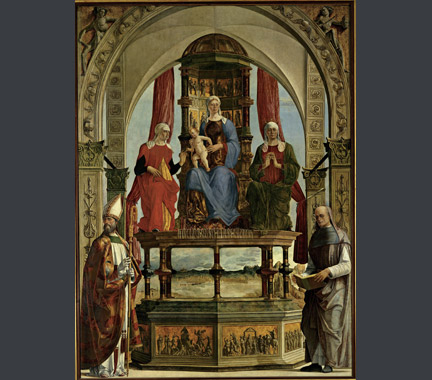 Gianfrancesco Maineri and Lorenzo Costa, who worked on this altarpiece in succession, were both pupils of Ercole. The altarpiece must have been three-quarters finished when Maineri left Ferrara for Mantua in 1498, and Costa took over the commission for the oratory of the city’s Franciscan confraternity of the Immaculate Conception. With the exception of the narratives to either side of the central arch, Costa did not alter the architectural background. His main intervention was confined to the figures. He modified their faces and draperies, and in some cases their poses. Other artists, probably employed by Maineri and Costa, may have worked on the miniature narratives.3

The architectural structure, planned with ruled and incised lines, has been fully exploited to enable the insertion of many narratives into the altarpiece. This is so complex that it is worth describing fully. The Virgin is seated on a marble throne, holding the hand of the Infant Christ, who raises his other hand in blessing. Two male saints stand below on a marble step: a saint in armour, probably Saint George (patron saint of Ferrara), and John the Baptist.

Mary’s throne is raised upon two richly decorated plinths, the lower of which supports the piers of the barrel-vaulted arch above her head. This lower plinth has three projections; the outer two act as bases for pilasters, adorned with coloured marble. Its cornice is at the knee-level of the standing saints. The upper plinth of the throne is of green marble into which white marble reliefs have been inserted. Above and below there are elegant grotesque friezes, and at the centre is a relief of the Fall of Man against gold mosaic, flanked by two circular ‘cavo rilievo’ (concave) medallions with elderly bearded men wearing turbans, most likely representing prophets.

The painted scenes on the projections of the lower plinth alternate with monochrome reliefs against gold mosaic. They depict episodes from the early life of Christ, from the Nativity to Christ among the Doctors. Most unusually, the sequence moves from right to left, with the Massacre of the Innocents in the centre.4 The narrative scenes on the throne are appropriate for an altarpiece for a confraternity of the Immaculate Conception, as Mary, the ‘second Eve’, had saved mankind from Original Sin by giving birth to Christ. It is interesting to note that Andrea Mantegna’s ‘Madonna della Vittoria’ (1495, Louvre, Paris) also includes images of Eve on one of the ornate plinths supporting the Virgin Mary’s throne.5

Behind this magnificent edifice stands a barrel-vaulted arch, the outside of which is decorated with acanthus leaves and a low-relief frieze of winged half-length putti, and two gold mosaic roundels of the Archangel Gabriel and the Annunciate Virgin. This projecting arch resembles some late 15th-century Venetian tombs, such as those of Doge Niccolò Marcello, Pietro Mocenigo and Andrea Vendramin in the church of SS. Giovanni e Paolo in Venice.6 The architectural structure continues to the left and right of the arch. Above the entablature are two scenes from the Old Testament, each on a gold mosaic background, representing subjection to God’s will. These show Esther before Ahaseurus and the Sacrifice of Isaac.

The elaborate internal architecture of Maineri and Costa’s painting would have been seen within a fully-realised architectural setting. The picture served as the high altarpiece of the Oratory of the Conception, the third on this site, which was built between 1498 and 1500 above the refectory of the Convent of San Francesco in Ferrara.7 It was installed within a three-dimensional frame at the centre of the end wall of the Oratory’s hall, flanked by four columns and an architrave, and accompanied by three further pictorial scenes placed above it in the ‘cimasa’, or crowning panel: the Crucifixion of Christ with the Virgin and Saint John the Baptist, the Pietà, and the Resurrection.8 NG1119 was part of an extensive decorative scheme, including frescoes representing scenes from the life of Christ, the Virgin, and portraits (presumably of confraternity members). It was immediately flanked by wall paintings of Saint Anthony of Padua and Saint Francis, and framed by painted architecture and a canopy with hanging lamps.

Some of the other pictures for this setting survive, but unfortunately we cannot yet reconstruct fully the architectural context of Maineri and Costa’s painting.9 The confraternity was suppressed in 1772, and some time later the hall of their oratory underwent major structural alterations. However, we can be certain that it was the painted architecture of this picture that enabled the Virgin, Christ and the saints to be understood by their original viewers as figures whose divine world connected to the temporal environment of the Oratory of the Immaculate Conception.

To cite this essay we suggest using
Caroline Campbell, ‘Lorenzo Costa and Gianfrancesco Maineri, The Virgin and Child with Saints’ published online 2014, in 'Building the Picture: Architecture in Italian Renaissance Painting', The National Gallery, London, http://www.nationalgallery.org.uk/research/research-resources/exhibition-catalogues/building-the-picture/constructing-the-picture/costa-and-maineri-virgin-and-child-with-saints