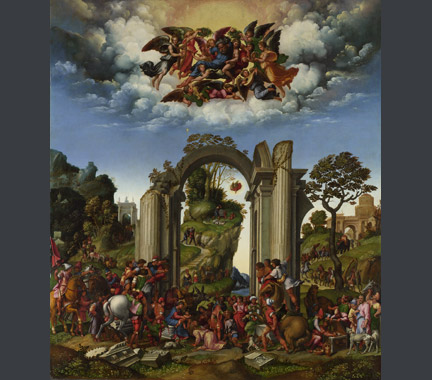 Although this painting was commissioned from Girolamo da Treviso as a direct copy of Peruzzi’s 'Adoration of the Kings' (fig. 1), there are a number of differences between the two works.1 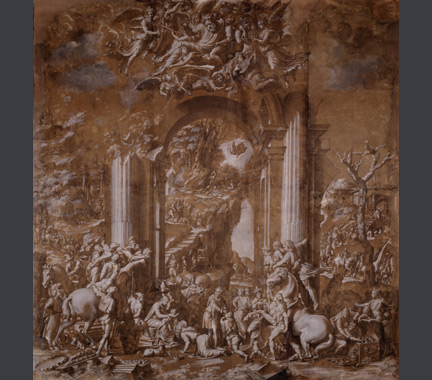 In terms of the buildings shown, the key differences lie to the far left of the painting, where Girolamo has widened the craggy hill that fills this space in the drawing and added two structures to the castle or fortified village on the crag seen in Peruzzi’s work. One of these appears to be a villa, with a squat tower guarding the main house, while the other is a church with a rose window and a bell tower. These few discrepancies in architectural detail aside, the key differences lie in the size of the works, and in particular in the scale of the central arch. Peruzzi’s work is nearly square (112.5 x 107 cm), while Girolamo’s painting is proportionally taller (144 x 125.7 cm), meaning that the arch, which in the drawing is over two-thirds the height of the work, is in the painting only half the height of the canvas. There is also more space to the left and right of the arch in Girolamo’s work, which, in combination with its reduced height, results in it appearing to be slightly marooned within the composition (particularly in comparison with the forceful presence of the arch in the drawing).

One key element that is preserved in the painting is the arch as an architectural leitmotif. There are three others besides the large central arch; one, barely visible, adjacent to the fortified village on the crag, a small triumphal arch below it on the left, and another spanning the entrance to the town on the right. The left-hand arch has freestanding Corinthian columns supporting plinths on which statues rest, connected to the main arch by an extension of the entablature. The upper storey of this arch is decorated with a frieze and topped by statues of three figures. Its general form recalls single-bayed Ancient Roman arches such as the Arch of Titus, Rome, or the Arch of the Sergii, Pola. The protruding columns, which are not present on either of these, may be derived from the Arch of Constantine. It is also similar to a drawing by Peruzzi showing designs for the unrealised entrance doorway to the Capella di San Giovanni in Siena’s Duomo (a project close in date to his work for Count Bentivoglio (fig. 1).2 The arch on the far right, by contrast, is closer to a large city gate, with projecting pairs of Doric columns flanking an arch that opens onto a street flanked by houses and populated with figures.

These scattered arches act as focal points for the procession, directing its flow down towards the figure of the Virgin under the central arch. They also have a narrative function; placing figures within and either side of the arches creates a clear sense of motion, of a moment in time, which corresponds with the dynamic poses of the figures grouped in the foreground. Interestingly, triumphal arches were a prominent part of the elaborate temporary architecture erected for Pope Leo X’s visit to Florence on 15 November 1515, a project with which Peruzzi himself was involved. Upon entering the city, the papal procession wound its way through six triumphal arches, each representing one of the Cardinal Virtues, before arriving at the Duomo, the façade of which had been converted into a final, immense triumphal arch.3 The depiction of the Castel Sant’Angelo at the far right of Girolamo’s painting is a further reminder of Peruzzi’s role in the Pope’s triumphal entry into Florence, as a large model resembling it was created at the junction of the Via Tornabuoni and the Via Porta Rossa for this event.4

Peruzzi’s aims in inventing the architectural ‘mise en scène’ which this painting copies – to frame, dignify and direct a procession of distinguished people – were broadly similar to those behind the design of the temporary architecture for Pope Leo’s visit to his home city. In both cases, he turned to the arch as a solution. In 'The Adoration of the Kings', Peruzzi dramatically increased the immediacy of this distant biblical event by couching it in visual terms familiar to a contemporary audience.

To cite this essay we suggest using
Alasdair Flint, ‘Girolamo da Treviso, The Adoration of the Kings’ published online 2014, in 'Building the Picture: Architecture in Italian Renaissance Painting', The National Gallery, London, http://www.nationalgallery.org.uk/research/research-resources/exhibition-catalogues/building-the-picture/architectural-time/girolamo-da-treviso-adoration-of-the-kings