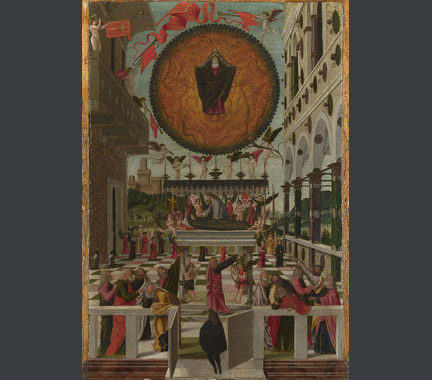 Very little is known about Gerolamo da Vicenza. He is first recorded as active in Vicenza in the 1480s, where he probably trained with Benedetto Montagna. ‘The Dormition and Assumption of the Virgin’ is his only known signed and dated painting. Its affinities with Carpaccio’s work have prompted some scholars to favour such an attribution, while others have argued that it copies a lost invention by Carpaccio. However, the picture’s unique composition, and the very precise inscription, ‘Hieronimus Vincentinus pincsit Venetiis 1488’ (Gerolamo the Vicentine painted [this in] Venice 1488), suggests that it was Gerolamo’s invention, and one of which he was proud. The painting is as small as the architectural vista it depicts is grand. It is thus tempting to characterise it as a ‘ricordo’ or memento of a grander composition, but although this category of picture was common enough in the 17th century, it was virtually unknown before 1500.

Kneeling on the threshold

We experience the scene, as it were, through the eyes of the man whose back is turned to us. He kneels at a threshold on the steps of a rail or screen, before an open gate. It is as if he is about to enter into a sacred space beyond, where the miracle of Christ’s resurrection was performed, in the liturgy of the Mass. A visual connection is made between the physical structure of the screen, and the world of heaven which the miracle of the Eucharist holds out to the true believer. The fictive marbled frame in the foreground resembles those marble parapets on which the infant Christ often stands in 15th-century Venetian paintings, such as Cima da Conegliano’s ‘Virgin and Child’ which simultaneously separated the viewer from the pictorial space and reminded them of Christ’s death and burial in a marble tomb of this type. 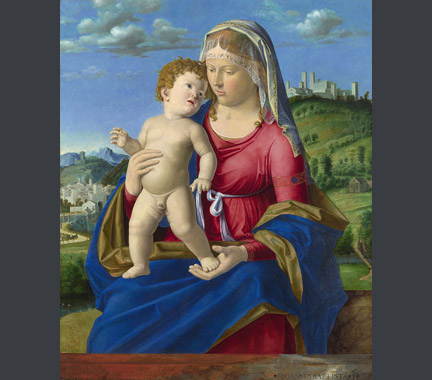 Beyond the altar rail we do not see an altar, but a great square, flanked by large and impressive structures, the setting for the death of the Virgin Mary. The piazza and the buildings which surround it are opulently decorated. Although these structures do not recall any specific buildings or places, the architecture and the square recall the grand civic spaces of north-eastern Italian cities, and the architectural fashions of the second half of the 15th century. They are impressively real, rather than part of an ethereal heavenly realm. The square is a chequerboard of expensive polychrome marble, while the open-arcaded marble palace at the right stands on porphyry piers, and is further adorned with red and green porphyry. At the left-hand side, angels bearing tapers process out of an enormous brick palace with a wooden balcony. Their destination is the great ceremonial bier bearing Mary’s body in the centre of the piazza. In the distance a castle and the countryside are visible. The architecture, the aureole of the Virgin, the bier, and the square itself have been planned with compass marks and grids of incised lines.

Under the bier, the apostles mourn their loss, conveying their distress with emphatic gestures. Two elderly apostles clasp the rail in despair, while three others extend their arms towards the Virgin’s bier, as if signalling Mary’s death. The most enigmatic of these sacred figures is the haloed saint in a red gown, whose back is turned to us. In his right hand he holds a lit taper and gestures at the dead Mary. More angels, on the balcony and in the sky, loudly trumpet Mary’s ascension. Above the bier, we see Mary ascending into heaven, surrounded by an aureole of cherubim. Her full-frontal position as she rises, supported by God the Father, resembles images of the Trinity (such as the one seen in Mansueti's 'Symbolic Representation of the Crucifix').

Ruth Chavasse has drawn attention to the similarities between the description of the apostles’ grief in Gerolamo da Vicenza’s painting, and the ‘First Oration’ by the Venetian poet Domenico Palladio Sorano, composed to be read aloud at the Feast of the Assumption at the Venetian church of the Crocifieri in 1499.1 There is certainly something very theatrical about Gerolamo da Vicenza’s Assumption, and there are parallels not only with lay poetry, but with the ‘sacre rappresentazioni’, or mystery plays, which punctuated civic life in 15th-century Italy. It is entirely plausible that this little painting may reflect lost scene paintings devised for these plays.2

To cite this essay we suggest using
Caroline Campbell and Amanda Lillie, ‘Gerolamo da Vicenza, The Dormition and Assumption of the Virgin’ published online 2014, in 'Building the Picture: Architecture in Italian Renaissance Painting', The National Gallery, London, http://www.nationalgallery.org.uk/research/research-resources/exhibition-catalogues/building-the-picture/architectural-time/gerolamo-da-vicenza-dormition-and-assumption-of-the-virgin