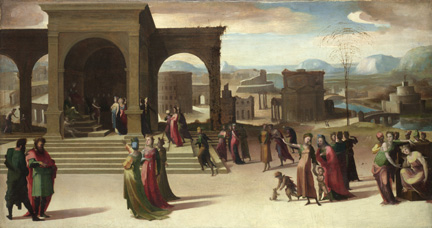 The subject of Beccafumi’s enigmatic painting, which has intrigued and bewildered scholars for centuries, was identified as the ancient story of Papirius in 2001.1 Tellingly, the earliest known reference to Beccafumi’s panel, in the inventory of the Medici collections in Rome in 1670, identifies the painting by its architecture, describing ‘un Culiseo con figure’ (a Colosseum with figures).2

The painting represents the story of Papirius as recounted in Aulus Gellius’s ‘Noctes Atticae’ (Attic Nights), a compendium of notes on grammar, philosophy and history, among other subjects.3 Gellius (about 123–about 169 AD) recounts how the young boy Papirius accompanied his father, a Roman senator, to the Senate and was sworn to secrecy concerning the matters debated there. Upon his return, Papirius was interrogated by his mother about the subject discussed. Pressured to give an answer, the boy fabricated a lie, claiming they had debated whether it seemed more expedient, and to the advantage of the state, for one man to have two wives or one woman to have two husbands. Panic-stricken by this news, Papirius’s mother rallied the matrons of Rome to petition the Senate that women might have two husbands. Their appeal was met by astonishment and outrage by the senators, who wondered at the strangeness of the women’s demand until Papirius intervened to explain the confusion. Impressed by the boy’s wit and loyalty, the Senate honoured him with the surname Praetextatus, after the ‘toga praetexta’ worn by young boys, to commemorate his precocious intelligence.

Beccafumi creates a cause and effect pairing in the panel by representing the two episodes of the tale in continuous narrative. In the middle ground at the far left, Papirius, wearing a short purple toga praetexta, is questioned by his mother who brings one arm to her breast and reaches out to him enquiringly with the other. Crossing his hands over his chest, Papirius emphatically demonstrates his reluctance to betray the senators. To the right, the matrons of Rome are shown flocking to the Senate to make their unexpected petition, while at the centre of the hall Papirius is shown again, gesturing to his mother and explaining the misunderstanding.

Although rarely represented in visual art, the story did appear as part of a decorative scheme initiated by Albrecht Dürer around 1521 in the great chamber of Nuremberg Town Hall and in a series of Flemish tapestries depicting the Twelve Ages of Man designed for an unknown patron in about 1520–3, now in the Metropolitan Museum of Art, New York.4 However, in neither of these roughly contemporary works is the setting of Ancient Rome as explicit as in Beccafumi’s painting. Here, the city is identified not only by the Colosseum and Triumphal Arch as glimpsed through the right arch of the Senate hall, but also by several other ancient and contemporary structures.

Although rendered in Beccafumi’s characteristic fantastical architectural language and dramatic chiaroscuro, the Roman monuments remain recognisable. The identification of several 16th-century monuments among the ancient ruins enables us to date the work more precisely, in the absence of additional documentary evidence. Dominating the composition, the imaginatively conceived Senate hall is part Renaissance loggia, part ancient temple, and vividly recalls representations of the Temple of Solomon, the archetypal site of wise judgement.5 Anachronistically included, to the right of the hall, is the medieval tower known as the Torre de’ Conti with its upper storey in ruins, the remains of the Basilica of Constantine or Maxentius, and the three surviving columns of the Temple of Vespasian and Titus.6 Just discernible in the distance are the crumbling remains of buildings on the Palatine hill.

All of these monuments register the effects of the passing of time. Anachronistically, they erode, fall into ruin or are overgrown with vegetation in a scene that is meant to have taken place before they were even built. Beccafumi also uses artistic licence in depicting the Castel Sant’Angelo, originally built as a mausoleum for Emperor Hadrian, at the far right of the panel. The structure was rededicated to the Archangel Michael following a vision of Pope Gregory I in the sixth century, and transformed into a castle by the popes in the fourteenth century. Flanking the bridge leading to the castle are two 15th-century chapels as they appeared until 1534, when they were replaced with statues by Pope Clement VII.7 In the Vatican complex beyond the castle, the Borgia tower is crowned with the cupola completed by Bramante in 1511 but destroyed by fire in 1521.8 The inclusion of these monuments strongly suggests the painting was made before 1521 rather than in the 1540s as was once thought.

Unlike the Roman buildings discussed above, the circular temple with a projecting porch in the right middle ground cannot be identified with any surviving structures. In 1967 however, Christoph Frommel made the compelling suggestion that the building was intended to represent early designs for the church of San Giovanni dei Fiorentini on the banks of the Tiber.9 Indeed, Antonio da Sangallo’s surviving designs of 1518–9 indicate that he conceived the church much as it is represented in Beccafumi’s panel: a circular drum sited within a polygon square and an external elevation with round-topped arches on the lower level, a triangular pediment at the upper level and a domed roof surmounting the drum.10

At the far left of the panel, through the rounded arches of the Senate hall, we glimpse an aqueduct in ruins, perhaps intended for the Aqua Anio Vetus. One of the oldest aqueducts in Rome, the Anio Vetus is described in Sextus Julius Frontinus’s ‘De aquaeductu Urbis Romae’ as built, in great part, by a man named Papirius.11 Although Frontinus mistakenly identifies the man as Lucius Papirius Cursor, the ‘Fasti Consulares’, official chronicles recording the names of the ancient consuls and their principal actions, reveal that the contractor was actually a consul called Papirius Praetextatus.12 Given the boy’s proximity to the watercourse in the painting, it is tempting to see its inclusion as an allusion to Papirius’s role in its construction. In the landscape beyond the aqueduct is a medieval church reminiscent of Santa Maria in Cosmedin and a circular building probably intended for the Theatre of Marcellus, with the projecting top of Trajan’s triumphal column just visible in the far distance.

However, it remains to be explained why Beccafumi, an artist who worked almost exclusively in Siena and for Sienese patrons, should show such familiarity with Rome and represent it so painstakingly in this work. It is widely believed that Beccafumi made a second visit to Rome around 1519–20, following his documented visit in 1510–2, as his work after this period demonstrates a clear awareness of the latest artistic developments in the city including Raphael’s decoration of the Vatican Logge and the villa of Agostino Chigi (the Farnesina).

At this time, Beccafumi’s work, and even his artistic style, had become almost synonymous with the new regime established in Siena by Pandolfo Petrucci and upheld by his heirs until 1524. The Petrucci reign put an end to Siena’s long tradition of republican rule and Beccafumi’s near-exclusive work for the family and their supporters in this period considerably narrows the number of likely patrons for this panel. Given both the subject matter and the detailed inclusion of Roman monuments, it may be that the patron also had particular interests in Rome as many powerful Sienese families did at this time. The Sienese Chigi, Piccolomini and Venturi families, for example, all had strong ties to both Rome and to the Petrucci.13 Further, the Sienese were particularly keen on emphasising their Roman origins in this period, through written histories and decorative schemes which referred to Siena’s mythological foundation by the nephews of Romulus, the founder of Rome.14

The form, scale and subject of Beccafumi’s panel suggest it once formed part of a series of decorative panels for a ‘camera’ (bedchamber) of a patrician palace. The panel, of a type now generally classified as a spalliera, would have probably been accompanied by other paintings that, like the Papirius narrative, represented events from ancient history that illustrated the ideal qualities of virtuous citizens. Such a decorative scheme had already been designed by Beccafumi in 1519 for the ‘camera’ of Francesco Petrucci, a wealthy merchant and nephew of Pandolfo, who briefly took the reins of government in 1522.15

Beccafumi’s representation of the Roman monuments reveals substantial spatial, topographical and chronological distortions or dislocations. Nevertheless, the buildings are clearly intended to be recognised and are so harmoniously integrated into the landscape that the artist manages to evoke not only an idea of Ancient Rome or of ‘Romanitas’ but also of different, and indeed overlapping, phases of civic, political and spiritual power from pagan antiquity to Christian present. This combination of ancient, contemporary and entirely fanciful structures in the painting conveys a sense of continuity and authority from antiquity to present day. The representation of the monuments, combined with the exemplary tale of civic virtue, may have appealed to a patron seeking to underscore hereditary status or to legitimate political power in a particularly tumultuous period of Sienese politics.