During restoration in 1978, this painting was discovered to have been radically altered, modifying the figure’s appearance to reflect 19th-century taste and morality. 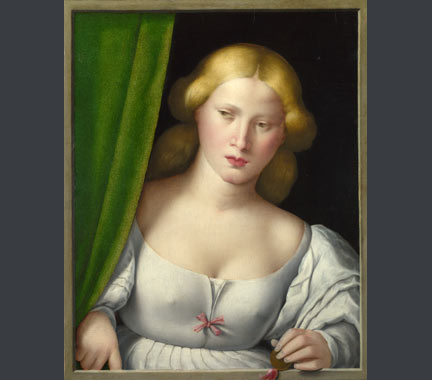 As a result of its exile, the painting did not appear in a National Gallery catalogue until 1925, when it was assigned to the ‘School of Palma Vecchio’. In the catalogue of the collection published in 1929, the attribution was changed to ‘Italo-Flemish School’ and the work was dated to around 1540. In the same year Roberto Longhi, an Italian scholar, proposed that it was by Lorenzo Lotto, but in a ‘Palmesque phase’.

The art historian Bernard Berenson was next to contribute his opinion in 1936. He gave the painting to Pordenone, an attribution which proved sufficiently influential for Cecil Gould to endorse it in his 1959 catalogue of the 16th-century Italian schools. Meanwhile, in 1957, the costume historian Stella Mary Pearce compared the dress worn by the sitter in the picture with the costume in Titian’s ‘Sacred and Profane Love’ (Galleria Borghese, Rome), and suggested a date of around 1515.

In 1978 Woman at a Window was recommended for restoration. The after-treatment conservation report records the unexpected results: "What had been thought to be a damaged under-layer disguised by re-touching, for example in the sitter’s hair, was quickly revealed to be the original paint in good condition, and it was clear that alterations have been made to the original design." 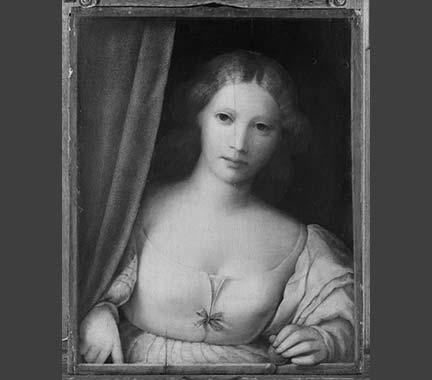 Before cleaning and restoration in 1978

As the restorer removed the old varnish, he found that a soluble brown overpaint dissolved with the varnish, revealing the sitter’s blond hair beneath it. And there were more surprises to come – the line of the jaw, the nipples and, most startlingly, the eyes had been radically altered by later interventions.

A portrait of a courtesan?

It is not known when the picture was overpainted, but the ease with which these later additions dissolved would suggest that it had occurred relatively recently (in other words, in the 19th century). There is no record that the alterations were made at the National Gallery, although the possibility cannot be ruled out, especially since the work had been banished to Ireland.

A more likely explanation, however, is that the painting was adjusted to conform to 19th-century mores with the intention of making it saleable prior to the acquisition by the Gallery. In its original state, the figure’s pronounced bust, sidelong glance and appearance at a window (not a common motif in North Italian portraits of women) suggest that she might be a courtesan or a prostitute. It is also conceivable the alterations were effected to make it more like the work of Palma Vecchio, for as the layers of overpaint were stripped off, so too were the old attributions to Palma Vecchio (and, for that matter, Pordenone).